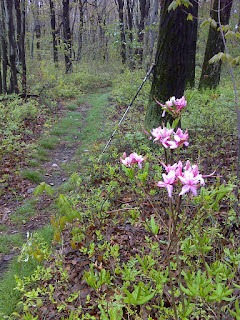 Ah, fickle spring.  One day she's your friend, the next day she's disappeared, leaving shivering flowers and hikers behind.

Last night we had an all night downpour--actually a welcome drought-buster all over the northeast - 2.5 inches as measured in the little plastic raingauge at the Eckville Shelter.  With it the temperature dropped into the upper 30's (F) and the north winds came howling.  There was heavy snow in the mountains ...

Wait ... I'm hiking in the mountains.

I got lucky.  I've been reading reports of snow and ice on the trail down south where the elevations are much higher.  Western PA got half a foot.  But the mountains I'm hiking here in eastern PA are no higher than 1700 feet, and weren't even close to getting snow.  To repeat, I got lucky.

Lucky, also, to be able  to wait out the nasty weather.  Finally I got back on the trail a little before noon today (Monday April 23rd) to find this forlorn little wild azalea bravely putting on its spring display, as if to say to the passing hiker "don't worry my friend.  Spring may have gone into hiding for a little while, but she'll be back."

Words of comfort don't keep you warm, though.  I wore some of my winter layers.  Again, I'm VERY lucky to be able to make gear choices freely every day.  I've been reading about hikers down south who had already sent home their winter gear, among them the Rainwater family, whom I met when they were just a week or so out of Springer.  They are OK, but had to abort hiking plans and hunker down in a shelter until the worst of the storm was over.

Here, my half-day hike took me from Port Clinton down to the Windsor Furnace Shelter (where three section hikers were unsuccessfully trying to get a fire going) and back again.  The only other person I saw on the trail today was a trail runner who whisked past me saying "Beautiful day!" to which I replied optimistically "Yeah, nice and cool."  The reality (for me) was a low hanging overcast with more showers passing through in the afternoon after a brief midday dry spell.

Still, it was a nice hike.  I started out by heading out of town along the Schuylkill, following a pipeline right of way: 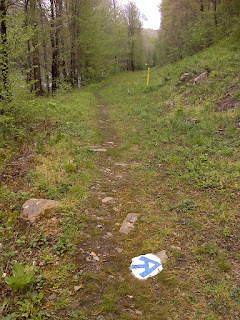 Then passing under PA 61 as it crossed the river: 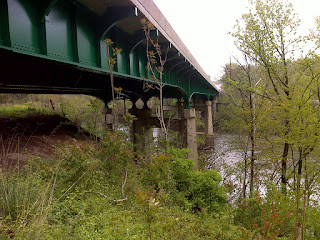 The climb up out of the river valley took me past the more well-reported of the two fires that struck the trail a couple of weeks ago.  See my report from last Monday for a look at the other fire in Halifax Township east of Duncannon.

Up on the ridge of Blue Mountain there were a couple of nice vista points before you drop down and pass a pair of springs named 'Pocahontas' and 'Minnehaha'.

The Windsor Furnace area features a short walk on gravel service roads past a small patch of mowed grass.  The only signs I saw of the old furnace were ... well ... signs (saying that it was there in the last half of the 1700's).

Rocksylvania update:  Today's five+ miles of trail featured a couple of steep climbs where the rocks were helpful, some rock-free pleasant walking, plenty of places where the rocks were annoying but didn't impede progress, an unusual section of flat bedrock walking (at left), and finally just 0.1 miles of intermittently difficult rock hopping.

Back home in the evening I enjoyed a rare meal in a restaurant - All you can eat.  I wouldn't mention it if the food wasn't excellent.  And it's actually visible from the Appalachian Trail (via 10x telephoto lens): 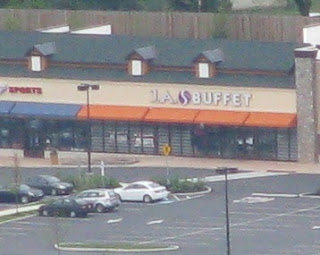 According to the forecast, spring is going to be slow in returning.  Tomorrow looks chilly again.  But I'll be there, dear spring, just like the little Azalea, ever trusting that you will come back to us.

Here's a map and link to more photos:

AT Day 103 - Port Clinton fire site at EveryTrail
EveryTrail - Find the best Hiking in Pennsylvania
Posted by PJ Wetzel at 4:43 AM