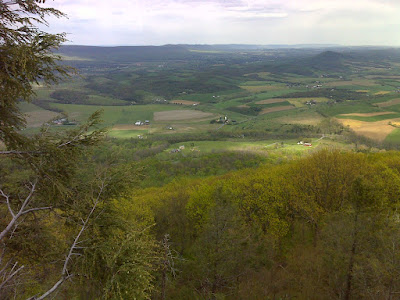 Billed as the best view from the AT in all of Pennsylvania - this was my view today (Tuesday April 24th) looking East from the Pinnacle.  You can see the radio towers in front of Lehigh Gap and then on to where Blue Mountain ends at the very threshold of New Jersey.  It was all it was billed to be.  Yet the Pinnacle isn't all that high, and doesn't look terribly imposing in this early morning view of it from Hawk Mountain Road: 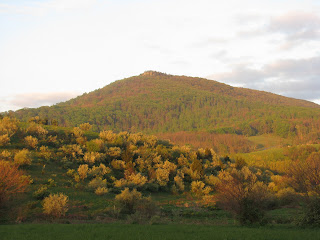 I actually preferred the simple flat rock setting that the Pulpit gave me, complete with trees appropriate for artistically framing the view: 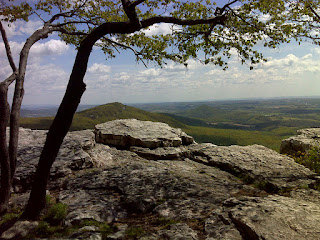 But both viewpoints, coming on this day of excellent visibility, were pleasures not to be taken lightly.  I soaked in these two vistas on both passes today.

The hike:  Started the day visiting the quaint little six-bunk Eckville Shelter, an 'outbuilding' behind a house that serves as the caretaker's cottage.  The 'side trail' to this shelter is actually just Hawk Mountain Road itself.  Then I began the hike in earnest. 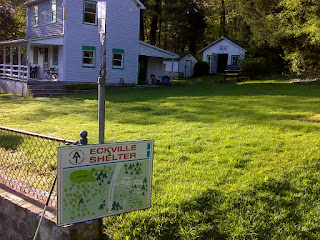 After rolling up and down through the woods for less than half a mile, the trail joins the Game Lands Service Road and follows one branch of that for more than four miles up to what was clearly once a parking area.  That was all super-easy walking.  From there it's just a quarter mile amble to The Pinnacle.  Between the Pinnacle and the Pulpit the trail is on its own, and there are one or two gnarly rock scrambles, but these are very short.  Overall, 'Rocksylvania' has yet to live up to its reputation.

From the Pulpit the trail drops down through big rocks, but trail builders have put in steps through most of this tenth mile section.  Then it takes up an old road and follows it all the way to Windsor Furnace, my turn-around point - again easy hiking.  So overall, I'd say less than a quarter mile of today's 9+ miles of trail can legitimately make claim to being difficult rock-walking.

The people:  I met three on the trail, one a clean cut gentleman out for a day hike.  The other two are a story:  I first met them as they were coming from Eckville Shelter and I was headed to it.  I asked them if the road was actually the 'approach trail'.  The older and taller of the two did the talking.  Yes, the road even has a blue blaze or two along it.  I told them about the other shelter that has a caretaker, and they younger quickly pulled out a page from a guidebook and confirmed its location.  This one seemed to be a boy going through puberty - perhaps the older one's son.

Next I caught up with and passed them on the way up to The Pinnacle and we chatted some more.  The taller one tried to keep up - clearly eager to chat, and enjoyable company for a few minutes.

Finally we met going opposite directions near The Pulpit  as I was on my return leg.  There we took the time to have some in-depth conversation, and I got the basics of their fascinating story.

They call themselves the 'Transgender Couple', and they're married.  We're talking here about  a  man marrying a woman, both of whom are transgender.  I wonder what the Fundamentalist "Marriage must be exclusively between a man and a woman" set would say about this.  No, actually I don't wonder at all.  I'd rather not waste my time.

Besides facing the burden of their sex change operations, this couple will be dealing with their age difference.  Brandon will turn 22 soon, and Hailey Jo (the more talkative by far) is 37.  She claimed to be having an 'off day' with her voice, and it indeed sounded purely male to me.  I had assumed she was male until this third encounter.  I'm a hetero guy who responds to feminine cues.  I got a few from Hailey Jo, but there were more male cues than female.  I have to believe that this Transgender thing is a long, tough road.  And Hailey Jo, very open to discuss her situation, confirmed that her 35 years of male programming were not going to go away quickly.

This pair is planning to do a long section hike - Delaware Water Gap to Springer Mountain.  They were wearing big packs and also carrying duffel bags in their hands.  I'll bet they find a way to lose some of that weight before much longer.  But they aren't attempting long daily distances - just from one shelter to the next each day.  I sensed that they felt free here on the trail, and in no hurry.

Transgender couples who are married and *both* transgender are a rarity.  It was an unexpected delight to meet and talk with these two down-to-earth people in the entirely unpretentious setting of the Appalachian Trail.  This is a place where such social and lifestyle considerations are secondary to the fundamentals of daily life.  If only the 'real world' out there were more like the Trail.  Civilization (technology) makes us so pampered and coddled that we forget what's important, and focus on trivial differences between us.  We have too much idle time to form pompous opinions and gaggle on about them uselessly.  This is yet another reason why the Trail makes me happy - I seek fellowship with what's *really* real.  I keep coming back to that Thoreau quote:

"I went to the woods to ... front only the essential facts of life, and [to]see if I could not learn what it had to teach ..."

Below is the map of today's hike.  Yes, there's a blue-blazed short cut trail that bypasses that long diversion to the Pinnacle, but I'm committed to pass every white blaze twice, so I did it the long way.  Click on the title line to the map to get a look at more photos.

AT Day 104 - The Pinnacle at EveryTrail
EveryTrail - Find the best Hiking near Allentown, Pennsylvania
Posted by PJ Wetzel at 2:20 AM