Hiking Mo'ore'a, French Polynesia, Most Beautiful Island in the World


Here's a quote from Arthur Frommer, founder and owner of Frommer's, and the author of best selling travel guides for fifty years: "I think Moorea is the most beautiful island in the world. Nothing compares with its sawtooth ridges and the dark-green hulk of Mount Rotui separating Cook's and Opunohu bays [photo above]. The view from Tahiti of Moorea's skyline is unforgettable. [next photo]" 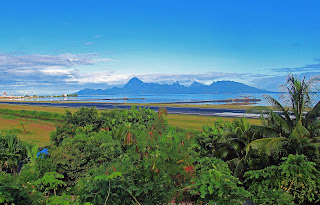 The nearby island of Bora Bora is far more well-known around the world.  I had time to visit only one; and for me Mo'ore'a was the better choice because of the scenery and hiking trails.

"Mo'ore'a" means "yellow lizard".  Why name it that? I have heard two versions.  Either it is just the name of a family of chiefs, or it's an ancient legend about a magical egg. When it hatched, a yellow lizard came out. The couple who found it called it Moorea and raised it until it got big. It became immense and its parents were afraid and decided to give it up and abandoned it on a canoe that drifted to the East of Tahiti. 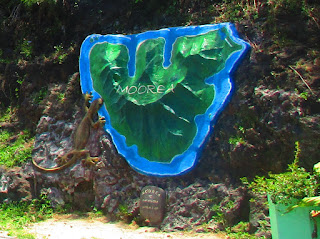 It was formed 1.5 to 2.5 million years ago from a volcanic hot spot, just like Hawaii, and was populated by Polynesians 1000 years ago or so, just a bit before Hawaii was.

Today it is a world class vacation destination, especially for honeymooners.  Here's the view from near the Island map shown above, overlooking the Sofitel, rated 9th in this list of the Twenty Best Overwater Bungalow Resorts in the world. 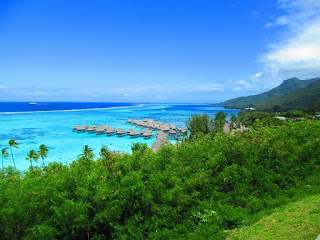 From one of those bungalows one may be treated to stunning sunrises over Tahiti Island. 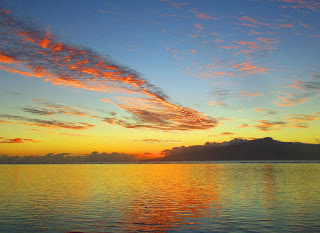 Looking down, there are the crystal-blue tropical waters at your feet, 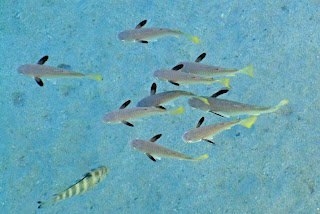 And turning the other direction, as a shower passes through, come the most vivid rainbows. 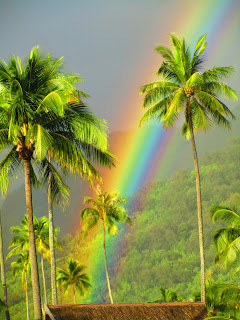 Mo'ore'a has a first-rate trails system in the middle area of the island.  The map shows the entire system with dark lines, with the red lines marking the sections I had a chance to hike, between Three Coconuts Col/Pass and Three Pines Overlook.

From Three Coconuts Pass, here's the view of Opunohu Bay, the left of the two bays in the headline photo, and often frequented by Cruise Ships. 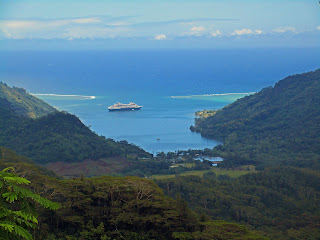 Turning to the left and craning your neck upward one has a close-up view of Mou'a Roa, such a sharp spire that I'm not sure it's ever been climbed. There is no info on it at 'Summit Post' which is my go-to authority on mountaineering destinations and one of the most comprehensive lists of peaks I know about. 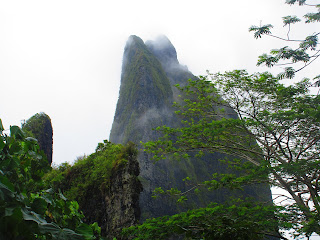 Here's another look at Mou'a Roa from down lower and further north. 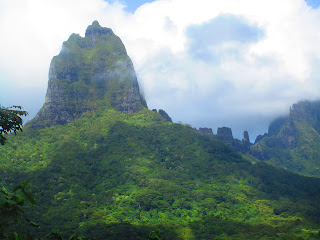 At the other end of my hiking exploits, from Three Pines viewpoint, one has a superb look at Cook's Bay, the right estuary in the headline photo, with the town of Paopao at the head of the bay. 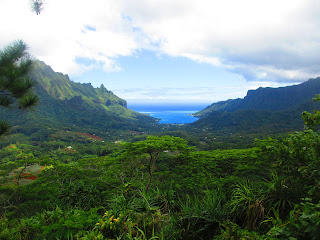 Three Coconuts Col actually has more than three coconut trees, surely planted.  Three Pines viewpoint, on the other hand, is exactly as advertised. 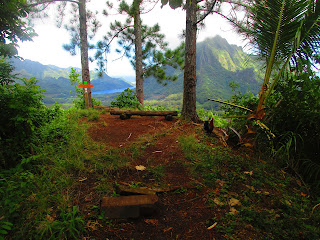 Even the chickens on Mo'ore'a are beautiful.  Here's a rooster hanging around Three Pines looking for a handout. 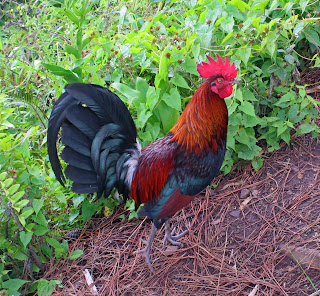 One of the truly unique features of Mo'ore'a is Mou'a Puta, the 'pierced mountain'. 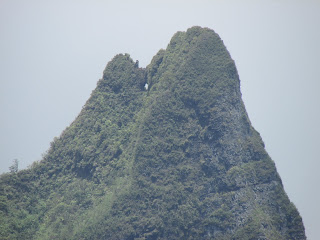 The hole is visible from the Ferry Harbor in the east, and from Cooks Bay in the west.  I did not climb it, but there is a steep, slippery trail to the summit, and here Summit Post does have a report, as does Wikiloc, where I found this stunning view back down to the Harbor: 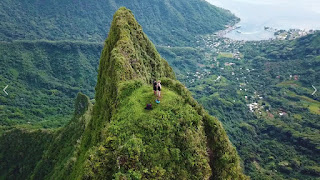 My hikes were short ones.  Other than the Three Coconuts and Three Pines walk, which were both based at Belvedere Overlook, I also strolled the long beach at the Sofitel.  Half of it is the hotel's private beach, the other half is a long strand of public beach. 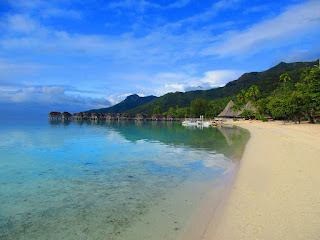 Bucket list item ticked off--a paradise destination that I did not want to die before seeing, because the experience is unquestionably one "to die for" :-)
Posted by PJ Wetzel at 9:25 AM 2 comments: