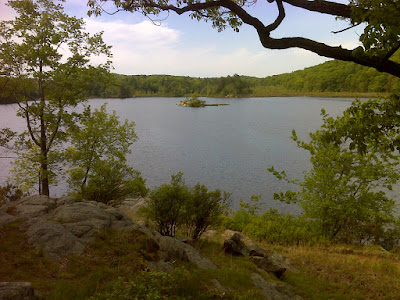 Sunday, May 14, 2012, part 1:  This is Island Pond. What a peaceful setting it has, seemingly unspoiled. And this is the park-like scene on Island Pond Mountain, just next-door, so to speak.  That's Island Pond itself visible through the trees. 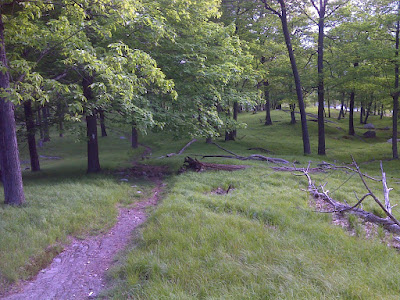 So who would ever expect to be subjugated to -- nay, crushed by -- the famous Lemon Squeezer between these two peaceful venues? 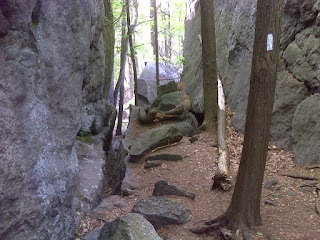 The Lemon Squeezer is actually a gauntlet made of three fun parts. Besides the ever-narrowing, uncomfortably skewed crevice shown here, there's a cave passage somewhat like Virginia's 'Guillotine' or Grayson Highlands' 'Fat Man Squeeze', and there's a seriously difficult 8-foot vertical scramble up a rock face that requires pulling yourself up with your arms because there are no reachable footholds. This is the most challenging bit of rock scrambling that I've seen on the AT. Of course I've not yet been through Mahoosuc Notch and The Whites of New Hampshire. But from what I understand, normally something this difficult comes with a climbing aid, such as a ladder or implanted steel pins, etc. In this case the only 'aid' is a blue-blazed bypass labeled 'Easy Way' ...

A blue blaze bypass of any sort is verboten -- totally out of the question for the trail purist like me.

To the purist, the white blaze is a sacred trust.  It is, in some real sense, like a religion.  There can be only one 'TRUE PATH!'  In my opinion blue blazed bypass trails invite the hiker to start down that slippery slope to perdition.

Verily I say unto you, brother hiker - take that first step onto the 'easy way' around the Lemon Squeezer and before you know it you'll be using blue-blazed short cuts just to save time. Next you'll be road walking, hitch-hiking, skipping whole sections.

Hell, why not just drive the entire route? Google Maps tells me it takes less than 24 hours by car from Amicalola Falls State Park to Baxter State Park.  Wave at some white blazes as you whiz past them on I-81 - Groseclose and Troutville, VA; Cumberland Valley, PA.

Start early, done by midnight. Big deal.  Been there, done that. Send in the application for your 2000 miler badge and move on to the next ""whoop-ass challenge"" (not!).  Who's yo' daddy?  Talk to the hand ...

Whoa ... I think my mind has just been Lemon Squeezed.