Yep, that's all that the AT did for me today - cross roads. No vistas, no unusual trail, just woods hiking through rocky glacier-shaped landscape that was riddled with roads.

South to north this section starts at the NY 403/US 9 crossing, crosses three roads that seem to be associated with the Graymoor Franciscan monastery complex, then climbs a rocky hill and descends to cross the Old Albany Post road (a dirt road) where it intersects with a surprisingly busy dead end dirt road called Chapman Road.  Next comes Canopus Hill Road, then South Highlands Road, and finally I turned around where the AT crosses Dennytown Road at a nice spacious parking lot.

That's it.  That was the main business of the day.  But I also had to go back and hike the Trailside Zoo at Bear Mountain again, because it was closed yesterday evening when I tried to make my return trip through it.  This time I was able to hike it both ways, which is mandatory for me.  Yesterday I had to take the Blue Blazed bypass trail on the way back south.  Today I took my time and enjoyed the views from a couple of side trails.  This view of the Bear Mountain Bridge and Anthony's Nose is about the only photo I took today worthy of publishing: 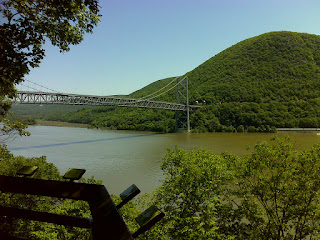 There were some interesting people-encounters today, though. It seemed like most of the hikers I passed this morning I had also passed yesterday. With most of these we just exchanged the usual passing platitudes, but I stopped and talked for fifteen minutes with one couple that I had only a cursory conversation with yesterday. It turns out that Kirk and Cindy were on their way from Cape Henlopen, Delaware to their home in Norfolk, CT via roads and the AT. They had just completed a continuous year-long thru-hike of the American Discovery Trail, doing it west-to-east, which is not common since the available directions are only given for east-to-west hikers. They have also hiked other trails. Kirk has hiked the PCT, the continental divide trail, and the AT twice (1978 and 1983) as well as various other shorter trails – 20,000 miles in all. He took my photo and asked if he could post it on his blog (he gave me a card), and I took their photo as well. It seems he’s a ‘professional hiker’, or effectively so. His web site is ‘HikingHumanitarian.com’ where he lists himself as a hiker, musician, speaker and author. It’s amazing the stories behind the people you meet on the trail, if only you take the time to discover them. 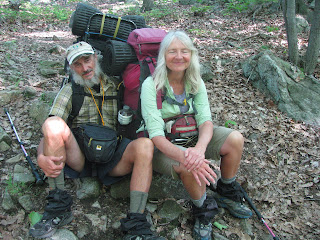 Here's today's track, which looks like a mess because I had to go back to Bear Mountain.  The software that EveryTrail uses connects the GPS points whether it's a good idea to connect them or not.  I have no control over it, unfortunately.  Also included is a link to their site, where I've uploaded many more photos.

AT Day 126 - Graymoor at EveryTrail
EveryTrail - Find the best Hiking near Yonkers, New York
Posted by PJ Wetzel at 8:21 PM