Yep, they've finally hit - or should I say I finally hit them today (Wednesday, April 25th).  Two kinds of rocky trail dominate the 4.6 mile section from 0.06 miles south of Dan's Pulpit to Allentown Shelter where I turned around and headed back over it all for a second time.  (I intended to go farther and it wasn't entirely the rocks that slowed me down today - nagging neck and shoulder pain helped.  But we'll set that story aside and hope I can adapt/adjust.)

One kind of rock is the honking-big stuff with bottomless pits in between where it's rock hopping on uneven surfaces.  At left is an extreme example from just north of Dan's Pulpit, where the AT chooses to take you straight up over this rock pile. 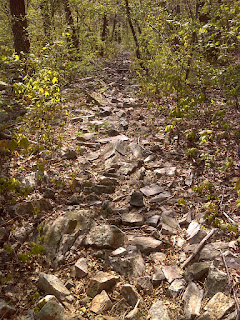 The other kind is concentrated small rock, often on level ground, but with rocks so abundant that there's little or no smooth footing to be found.  Frankly, I'm quite sure that this sort of trail could be cleared of all its rocks - if there were enough dedicated labor available.

Both kinds of rocks slowed me down.  And in this 4.6 miles of trail I measured 3/4 mile of the big stuff, broken into nine sections of no more than 0.1 mile each, and a half mile of the small stuff, mostly concentrated on either side of the side trail to Dan's Spring.

That still identifies the large majority of this section as being not difficult.  But if you measured time spent rather than distance traveled, the rocky sections would appear to have a more significant impact (on the hiker's attention and energy as well as on their schedule).

Note also that the entire ascent from Hawk Mountain Road until you get close to Dan's Pulpit is easy trail (except for the steepness of the old woods road walk as it climbs side-slope up the upper flanks of the mountain.)

So them's the facts - the hard numbers.  But beyond the numbers is the human response.  For me - at least today - the impression left behind is dominated by those rocks.  Oh, those Pennsylvania Rocks!  They feel relentless.  They beat down the psyche.  The fact that the rocky sections are intermittent only gives them more impact - the smooth interludes put you to sleep, so to speak, so the next onslaught of rock comes as a 'rude awakening'.  And after too many 'rude awakenings' just about anybody would begin to get irritated.

There's an argument that says you need to go through rocks if you want to get to the rock outcrops where the good views come.  It's a valid point.  And there were two nice vista points and a monument along the ridge here.  Besides Dan's Pulpit, view shown below, there's Balanced Rock.  Both offer great views of The Pinnacle and surrounding farmland.  And today was a pretty day to take in the views. 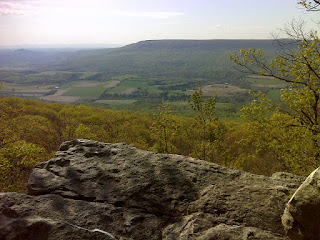 Then there was an extra-curricular rock scramble to get to this nice springtime view of the Tri-County Corner monument, which also marks the point where trail maintenance changes hands from the Blue Mountain Eagle Climbing Club to the Allentown Hiking Club. 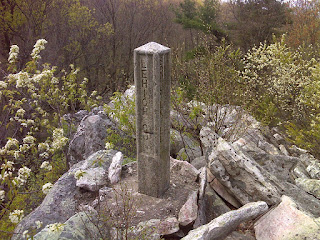 Finally, near the end of today's hiking, I had a pleasant surprise - I ran into ATC Information Services Manager and Facebook friend Laurie Potteiger, out for a section hike with her husband Dick ('Mountain Laurel and Hardy') and friend 'Elf'.


Laurie had posted on my page that she would be hiking in PA sometime soon, so meeting her was not entirely unexpected; but it was a wonderful way to end a difficult day.  They were the first people I had met on the trail all day.  And they're working north too, so we may cross paths again in coming days.  I very much look forward to that.

Below is a map showing today's route and a link to more photos.

AT Day 105 - Dans Pulpit at EveryTrail
EveryTrail - Find the best Hiking near Allentown, Pennsylvania
Posted by PJ Wetzel at 12:15 AM