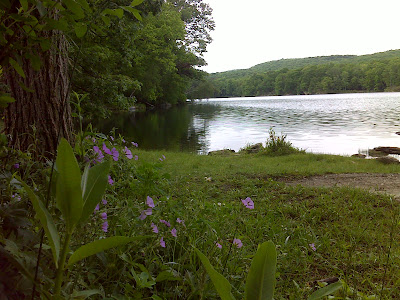 Rain delayed my start today.  Studying the radar I was anticipating it ending gradually, and indeed it did.  I hit the trail at 10AM, starting at the I-84 overpass on Stormville Mountain Road.

The 3.5 mile section of trail from I-84 to Depot Hill Road is described in the guidebook as having some tough rocky scrambles. I think there were three short ones, maybe only two, that really slowed me down. Otherwise it seemed like pretty easy trail to me, and there was very little major elevation change – just small ups and downs. The view from the rock outcrop on Mt. Egbert was great but the overhanging clouds and some humidity made for less than the best viewing conditions.

I bypassed Morgan Stewart Memorial Shelter on my way north. Hearing people talking there, I opted to visit on the way back, as always hoping for an empty shelter so I can take care of my business without distractions. When I got to Depot Hill Road I found that the unmaintained east side section (which I had scouted and chose not to drive earlier) ends at the summit where there are communication towers. The road is actually nicely paved from there on west down the hill. The parking area is a bit more than a tenth of a mile road walk to the actual summit (the trail crosses east of the summit) and was a very nice little off-road space. As I walked back I was formulating plans to use that as my next parking area.

Stopping at the shelter I had it to myself at first, then a couple hiking a long section from Delaware Water Gap to Massachusetts came in for lunch. I sensed some tension or something, and they man seemed fixated on whether I was going north or south (which I wasn’t explaining very clearly, saying I was currently going south but go both ways every day and am, in the larger sense, heading north). They were a nice couple – probably just an off moment to talk with them.

Then another people story: Just as I was emerging at the I-84 overpass about 1PM I ran into the older, smallish bearded man I had passed a couple times yesterday. This time he was without his backpack, compass in hand, studying the trailhead bulletin board. He seemed a little frantic, and upsett. When he started to ask me his question, he was incoherent – the words made no sense to me. He was pointing to his compass and to me, very perplexed. Finally he pulled out a card which explained that he has aphasia as a result of a stroke. The problem with this impairment is that he can’t express his question, but similarly cannot understand my answer. I’m pretty sure that he was disoriented by the road walk and wasn’t sure which way was northbound. But it wasn’t clear to me, and so I’m not sure if I helped him. I don’t know where he left his backpack, but it would seem difficult to mistake where he came from (south) from where he had not yet been (north). Otherwise he has no business alone hiking the AT.  As I repeatedly pointed northbound, saying "Appalachian Trail North" he seemed to suddenly have an ‘aha’ moment and articulated it pretty well. "Okay, Right!"  I left him and went toward my vehicle parked a quarter mile down the road, but saw him still going back and forth at the intersection as if still confused. He must be competent enough to do what he's doing … but I wonder. I didn’t see him again today.

The sky was generally brightening except for a few dark patches with sprinkles. So I headed out to find the west-side access to Depot Hill Road. It was a very nice residential road all the way to within sight of the parking area. I parked there and headed north. In less than two miles, the first half of which was roughly level with little ups and downs and the second half of which was a steady but not difficult descent, I reached civilization again.  I crossed an abandoned railroad that is apparently slated to become a commuter rail route to NYC, then crossed old Highway 55, then new highway 55 then passed the side trail to the parking lot on new 55 – no bigger than the one on Depot Hill Road and similarly configured as a little square lot. A sign indicated that the side trail to the lot was, until 2006, the route of the AT.

By then the weather had turned really nice – some sun was breaking out and the wind was calm. It was humid and the rain had left the air fresh smelling – pretty much my favorite kind of conditions. I had the time (barely) so decided to hike on to my minimum ‘quota’ destination for the day. Perhaps I shouldn’t have because the return climb, coming at the end of the day, wore me out. But I get ahead of the story … I decided to head on and turn around at Nuclear Lake, which I learned is so named because it’s the site of a former nuclear testing facility (until the 1970’s). But now it’s owned by the state and I found it to be an absolutely serene setting on this calm evening. Nobody else was there, and there were no sounds of gunshots – the guidebook says there’s a firing range nearby. It could not have been a nicer place to end my day. I lingered a little and took lots of photos. Above is my pick from among them.

On the way back I wasted time checking out a reroute identified by signs on both ends as being twice as long as the 0.15 mile section it replaces. That’s such a short distance that I decided to check the old trail to see if I could figure out why it was rerouted. I could see nothing other than a couple patches of maidenhair ferns in a little valley – are they rare in this area? Otherwise the old trail looked nicer than the new – no erosion or rock or bog problems at all. I concluded that there may have been some kind of endangered or threatened species there – or perhaps there was a bit of low level nuclear contamination.

Anyhow, now comes a third people story for the day.  After a few minutes back on the trail south I passed a guy who, upon seeing me, immediately asked “Are you ‘Seeks It’?” This turned out to be ‘Bomber’, a guy I met below Gingersnap’s trail magic site near Rock Gap. Once again my ‘face blindness’ was painfully evident. I studied the guy’s face intently and could not recall him. He told me where we met, but even that only brings back vague memories. He was the guy who passed me praising the amazing brownie he had just eaten. I do not remember any more of the conversation, though I told him I had just met Gingersnap coming back from delivering said brownies.  I don’t remember him saying his trail name or saying mine, though clearly the conversation must have been more extended than I remember. I was probably distracted by the long conversation I had just had with Gingersnap.

Anyhow, back to today ( I checked my entry for the date of our first meeting, March 22nd, AGAIN two months TO THE DAY, between encounters - same as with 'Parkside'/Paul) Bomber was headed to the Telephone Pioneers Shelter and would get there just before sunset and wanted to spread out all his stuff to dry it out, so I didn’t want to delay him. We had a nice but brief conversation and he mentioned Trail Journals – he might write in my guest book and post his email there.

I headed on back to my Depot Hill, kicking myself, wishing I could just roll up in a ball, because of my ‘disability’. It happens I was wearing the same Honda hat that I was wearing at Rock Gap, and maybe my beard is distinctive, so maybe ‘Bomber’ had an easier time recognizing me than I did him (he’s a normal looking 20-something with no particularly distinguishing characteristics – medium height, dark brown hair, etc.). But he instantly recognized me and then I’m sure I hurt his feelings by gazing at him, studying his face, puzzled and failing to recognize him. Yes, it makes me just want to roll up in a ball and cry. I don’t want to hurt people’s feelings, but I simply cannot recognize faces unless I’ve imprinted sufficient other memories to go with the face.

So it was with a sense of defeat that I made the climb back up from 55 to Depot Hill.  As I said earlier, it wore me out, coming at the end of the day.  I was hurrying and my mood probably didn't help. Back 'home' all I wanted to do was sleep.

Ahh, to sleep: perchance to dream ... of Nuclear pansies, glowing in the dark ...

Memories of my peaceful interlude at the lake flooded back, and soon I was content.

AT Day 129 - Nuclear Lake at EveryTrail
EveryTrail - Find the best Hiking in New York
Posted by PJ Wetzel at 9:52 PM