Creatures of all sorts 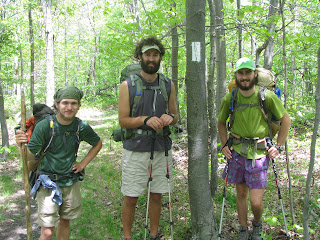 Then on Cat Rocks I spotted this nest of Ravens: 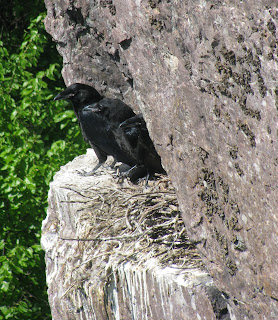 Close up of the four baby Ravens taken from above: 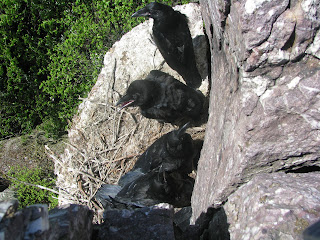 A colorful and harmless milk snake occupying the AT a half mile north of  NY 17A:

And then I saw FOUR bears (all together, about a half mile north of Fitzgerald Falls).  Looked like a papa (scary-huge), a mama and two yearling cubs (who scrambled up trees).  I managed to get this shot of two of them before I spooked them all and they fled, uttering their soft murmuring vocalizations (as if saying: "No, not the trees kids - that's a human - a rock thrower, a gun toter.  Get down and run!  Follow me)": 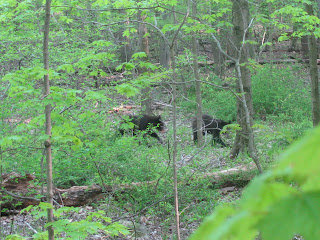 Before starting my hike today I spoke to the proprietor of the hilltop hot Dog stand on NY 17A above the town of Warwick, NY.  He gave me the full rundown on the big party Warwick is having on June 30th to celebrate being the first town in New York State to become an official (ATC designated) Appalachian Trail Community.  Part of that involves the relocation of the trail from where my guidebook says it comes out (near the hot dog stand on Continental Drive), to an abandoned house down the road.  That house is to be town down (by June 30th?) and replaced by a huge new AT parking lot: 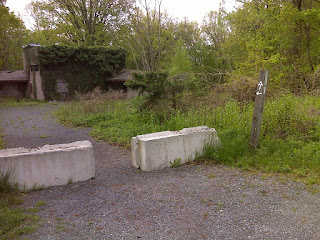 Now that I've mentioned Fitzgerald Falls (in the bear story above), I suppose I need to show you that: 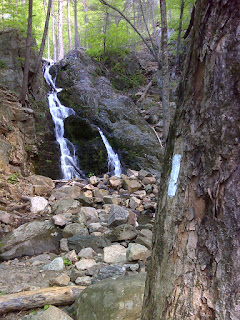 And finally here's the best vista of the day - Greenwood Lake from the ridge of Bellvale Mtn., about a half mile south of the Village Vista side trail that leads to the town also called Greenwood Lake: 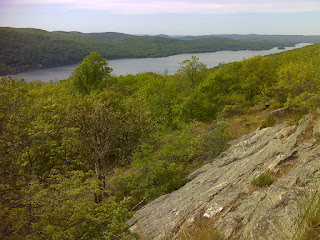 As you can see, it was a beautiful day.  There was more of the ridge-spine bedrock walking today, but only in short sections.  Most of the rest of the trail was normal, some of it downright easy, so I made decent time even though my bones were still a bit weary from yesterday's walk over miles of undulating, sometimes more vertical than horizontal bedrock spine.  Everybody I met today agreed - that four mile section from the NY-NJ state line to the Village Vista side trail was one tough stretch of trail.

Today there were two short bits of the same sort of tough trail, Cat Rocks and the Eastern Pinnacles.  But both were short and both offered blue blazed bypass trails (for wet conditions, lazy or tired or less adventurous hikers, and those who want to leave their packs at the end and then go back and scramble the rocks without the extra weight).  It's nice to have choices ... but for me, of course, there was but one choice - 'religiously' pass every white blaze in both directions.  And once again doing the trail twice paid dividends.  The first time over Cat Rocks I didn't notice the Raven's nest, and the milk snake and bears were nowhere in sight on my first passing of their locations.  In the end, not a bad harvest of photos and memories ... and not a bad day to be out on the trail.

Here's a map and link to more photos.  The straight line segment is an artifact that I don't know how to get rid of.  It indicates that I turned off my GPS while I drove from one parking/access/trailhead to the next.