Let's have a little fun, then I'll attach my dry trail description at the end. Here's probably the only place you can get a train directly on the Appalachian Trail. Hike to here and the next thing you know, you're off to Istanbul. 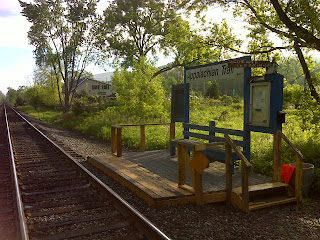 Did you notice the bird sitting on the roof of his house in the above photo? 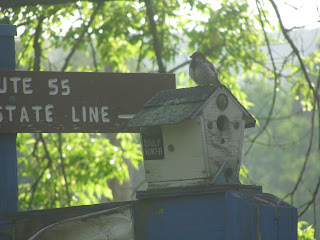 When the trail needs to cross a small swamp ... one that can't be bypassed ... the Boy Scouts of America come to the rescue: 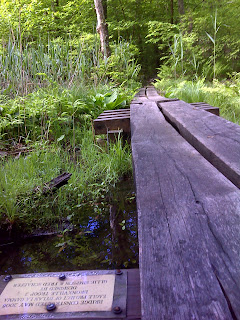 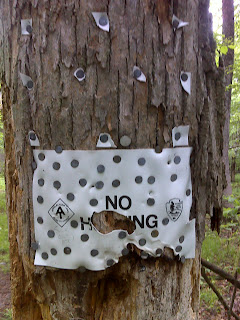 Trash trash. The trashiest place on the AT (Springer to here). Grab some buds, maintainers ... underage drinkers are not going to pack out the evidence. This beautiful vista needs to be better patrolled. 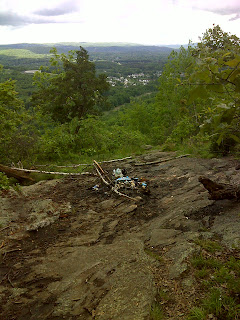 The new luxury boardwalk and the old puncheon and footbridge. There's almost a half mile of new boardwalk here over the aptly named Swamp River valley, so I'm including a couple of pics: 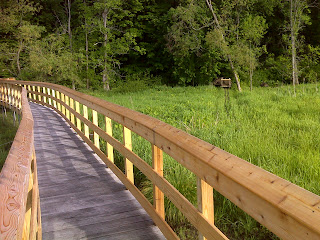 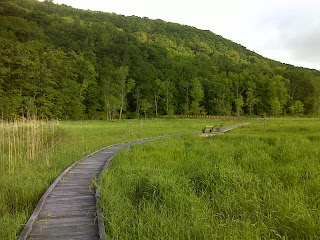 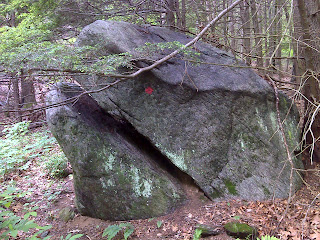 We have a Whale Rock along Rist Canyon Road west of Fort Collins, CO, where I lived in the 70's. That one is much smaller, but it's in a much more prominent place. So the Colorado artists have gone wild. Back in the early 70's they had just painted the eye, and in my opinion, the minimalist approach works best. Wonder if I still have an old photo ... 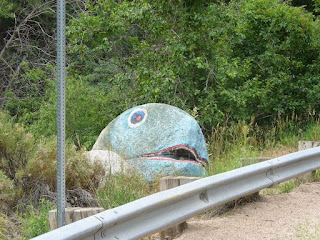 Okay ... humans are man-made, no? Here's 'Bomber' and his rubber chicken 'Henry'. The second thru hiker I've met twice, two months - to the day - separating the two meetings in both cases. 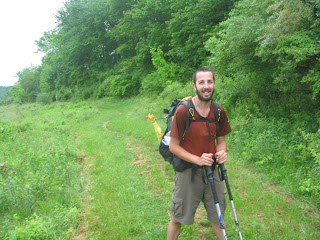 And yes, Nuclear Lake is a man-made lake. I revisited this enclave of serenity again today: 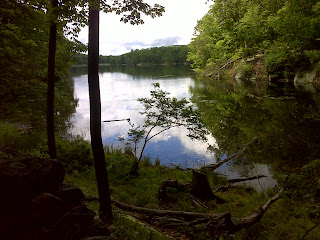 ******************
So now, for the detail-oriented, here's the verbose transcription describing today's hike from my personal journal:

I dressed and headed out a bit after 7:30. It was already summery humid and warm, with the temperature overnight never lower than the low 60’s and dew point to match, obviously.

The hike was interesting from the start and remained so most of the leg south. I first had a road walk past a nursery and landscaping business, which, I’m told, offers free showers to hikers. Then the trail leaves Highway 22 at the Appalachian Trail Metro-North stop, only used on weekends and holidays. Beyond the tracks there is nearly a half mile of spanking-new boardwalk over Swamp River and its attendant broad swamp. There’s even a beaver pond with huge lodge right near the boardwalk.

The trail then climbs a small mountain, Corbin Hill, in the woods and descends the other side in fields with scenic views of a rock outcrop on a ridge to the west. While crossing these fields I met ‘Bomber’ again. We had a very nice chat and took each others’ photos. I hope I can follow his progress as he continues north.

At the bottom of this field walk, the trail passes Dover Oak – a huge old white oak of massive girth, supposedly the biggest on the trail – right beside West Dover Road, county highway 20. Then there’s a little swamp crossing before the significant ascent begins. That ascent starts on a slippery-when-wet bedrock spine. Why they relocated the trail there escapes me – the old trail is visible passing over normal terrain just to the left as you ascend. I suspect it’s pure laziness – bedrock is easier to ‘fix’ than erosion on the old trail. That sketchy bit only lasts a couple hundred yards though, and then the ascent is on normal trail, aka soil, and is fairly easy. It’s interrupted before the summit by the side trail to the Telephone Pioneers Shelter – no historic significance to the name, it was just sponsored by the local chapter of the Telephone Pioneers of America when it was built in 1988. I stopped in there and took a photo and signed the register as I do at every shelter. I had the place to myself, but as I was leaving, the same couple who I’d met at Morgan Stewart Shelter yesterday at lunch time, were arriving to take a break. Remembering my first impression from yesterday, I was a little guarded.  But today these two were pleasant company. We chatted for just a few moments and I learned their trail names: ‘Day-Glo’ and ‘Blue Bird’, section hiking from Del. Water Gap to North Adams, MA.

I headed on out for the second half of the ascent to the ridge top where the rock outcrop I spied on the field walking earlier now presented me with a great view of where I had just hiked and Dover Oak. I’ve marked it on the photo below: 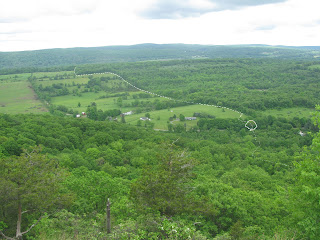 There was a beer-can-littered illegal campfire site right near the viewpoint – dozens of cans – more trashy than any spot I’ve encountered anywhere on the AT between here and Georgia. Underage drinkers are *not* going to pack out the condemning evidence, so somebody has to patrol this area better.

From the summit the trail gradually descends, passing a couple of side trails and an Eagle Scout constructed bridge over a significant swamp area. Finally I reached my turn-around point at Nuclear Lake and had a chance to linger there again on a nearly calm, humid, summery late morning.

On the hike back I finally ran into the late-60’s-ish couple who own the red van with NC plates that ‘Scooter’ is shuttling. They’re a very nice pair, excited to learn of my way of hiking. I was especially impressed by the smiling eyes – very pleasant people. Tomorrow is their last day on the trail for the year. Each year since 1990 they’ve hiked a section, starting in Springer and steadily working north. Next year they hope to do all of CT and MA.

I got back to the NY 22 parking area at 1:30, just as a few sprinkles were beginning to fall. I checked the radar – good internet reception there at the parking area – and it looked like a quick, insignificant shower that would quickly be finished. So I might have headed out right away, except for the fact that I was deliberately taking things a little easier since my ‘watershed’ reassessment and three zero-days. Instead I chose to have some lunch and rest a bit. And that turned out to be a very good choice, because by 2:30 the skies had opened up. There was a nearly stationary shower that had developed, mostly to the south, that was just endlessly dumping heavy rain here. I’m guessing that ‘Bomber’ had already gone far enough north that he missed this shower completely. But I was obviously not going to go out and hike in that. It lasted for more than an hour as I had more lunch and then napped to 4PM. I still had thoughts of doing the planned short leg north in the evening, but it was still dripping rain at 4:30, so I decided to settle for this short under-quota day and use the time to catch up on the blog writing and publishing.

And that I did with this long post.  And I'm back on an even keel, ready for an early start tomorrow.  Hope the weather co-operates.

Below is a map of my hike today.  The title is a hot link that takes you to 22 photos taken along the route.

AT Day 130 - Nuclear Lake to NY 22 at EveryTrail
EveryTrail - Find the best Hiking in New York
Posted by PJ Wetzel at 8:49 PM