Port Clinton in the rain

It's a postage stamp of a town - just a few blocks from end to end, with 288 residents.  It's home to the Reading, Blue Mountain and Northern Railroad, and, as far as I can tell, not much else.

This railroad line is an interesting story.  The corporate headquarters looks like a museum of 1800's railroad history, but the company only dates back to 1990 and is freshly viable as a commercial enterprise because of the natural gas drilling that is getting underway in the extensive deposits in the Marcellus Shale formation.  But I digress. 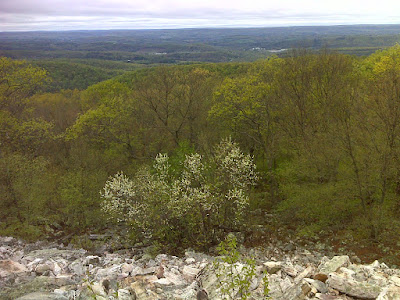 This is, after all, intended to be a report of today's (Sunday, April 22nd) day hike, covering about nine miles of Appalachian Trail.  My walk through Port Clinton came at the beginning and end of the day.  In between I headed south out of town, climbed the steep section up to the ridge of Blue Mountain, and then passed the one nice vista of the day, called Auburn Lookout.  Views north have been rare along the trail since Duncannon, so this was a treat.

There were rocks, of course, but only a few annoying spots.  A big percentage of the trail today was actually rock free.  Otherwise it was the same old semi-annoying pick-your-way-between-rocks sort of walking that has become familiar.  In fact, the only other thing (besides the walk through Port Clinton and the view from Auburn Lookout) that made today's hike special really doesn't lend itself to a photograph - the rain.

Rain was in the forecast.  I expected it by afternoon; but it began early, at 10:15AM.  By 11:30 it was raining steadily and the stiff north wind was picking up.  The temperature was in the upper 40's.  Since I had expected these conditions, I was dressed for them.  And I had my trusty poncho at the ready.   But the rain stayed light enough - at first - that I didn't feel the need to get it out.  As it kept getting steadily heavier, I still didn't see the need for it.

It's like the old 'frog in the frying pan' story.  You put a frog in a cold frying pan and then turn on the stove.  The pan gradually warms up and the frog doesn't notice the change in heat and doesn't jump out.  Drop a frog into the same scalding pan and it leaps to safety immediately.  Same for me.  If you had thrown me out into the rain at 3PM today I wouldn't have been able to get my poncho out quick enough.  But slowly turn up the rain intensity and I never sensed that I was getting seriously wet.  In fact,  I was staying nice and warm despite the wetness steadily encroaching through my clothing.  So in the end I never did break out the poncho.

And what surprised  me most about today's rain was that it made the day fun!  It was something different on a day when the trail was not.  It was an adventure and a challenge.

So in the end, as I straggled back into Port Clinton dripping wet, I didn't even make for my vehicle.  Instead I did the walking tour of the town in the rain.

As I came down Broad Street a black Labrador retriever came sprinting across its yard barking, defending its territory.

"Don't you have enough sense to get out of the rain?"  I scolded; then I muttered to myself with an ironic smirk: "Stupid dog!"  I was talking about me.

Here's the map of today's hiking route with a link to more photos:


AT Day 102 - Port Clinton at EveryTrail
EveryTrail - Find the best Hiking in Pennsylvania
Posted by PJ Wetzel at 12:53 AM