The mythos of Zero days 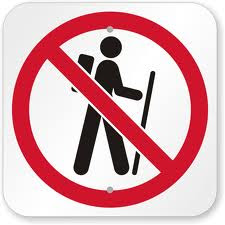 No, this is not a post about internet hackers and cyber-security threats. Long before the web even existed, a "zero day" was Appalachian Trail thru-hiker jargon for 'a day when I hiked zero miles or made no significant progress'.

So this is a post about not hiking when you're hiking: taking a zero day.

I don't need zeros, I don't want them, I resent them! But I gotta take them once in a while to take care of business in the outside world - maintaining those lingering vestiges of my (former and potential future) life beyond the trail.

But I heartily resist being forced away from the trail. The trail has become my de-facto home - much more so than I had ever anticipated. And I don't do transitions well, thanks to my sub-clinical Asperger's Syndrome.

When I was planning my year-long adventure on the AT, I had expected that I'd want to spend at least a night a week in a motel and would welcome such breaks, including the breaks back 'home'. I had read many accounts about how much thru-hikers look forward to their time in trail towns. It seemed to be a universal truth - hikers need a zero day now and then.

But as *my* hike went from theory to reality, I found a different truth: I didn't want my evening and morning routines complicated by a move into and out of a motel, or even a restaurant. And as time stretched to 26 consecutive AT hiking days, it turned out that I only ate three restaurant meals, and the only over-nights I spent in a building of any kind were the two consecutive nights at Woods Hole Hostel when my daughter came to visit and hike with me. I just preferred the simplicity of getting up before sunrise and going, getting back at sunset and stopping. Copy, paste, repeat.

Don't I miss showers? I thought I would, but my answer is no. I slap on some underarm deodorant most mornings, use some hand sanitizer to 'de-cheese' my smelly feet at the end of those hiking days spent in four-day-old socks, and I'll 'spruce up' with a pre-packaged moist towelette each time I switch to clean underwear (which I do "once a week whether I need it or not"). And that's it - that's all the hygiene I seem to need.

My stock answer regarding modern civilization and all its trappings is: humans did just fine in a 'natural state' for 100,000 years and more. What up? We're more adapted to life without smart phones and sporks and body-gel than with them.

I'll make one concession, however: It's great to be able to do laundry in an automatic washing machine rather than using a rock beside a cold stream as a washboard.

OK - I'll make one more (theoretical) concession. If the weather ever got bad enough - like a blizzard - I would take zero days to avoid it. But so far that hasn't happened. So as I approached a month of continuous hiking, I had to select a time to get off the trail and take care of business when the weather was 'hike-able', but worse than average. So I picked this weekend (Starting Friday 1/27) when two waves of gusty 'widow-maker' winds and icy temperatures were pushing through southwest Virginia.

It was a flash tour - pick up mail, pay bills, water plants, do laundry, and (just because it was available) take a shower. It was a strange feeling heading to the beach not because I wanted to but because I had to. And yet the intoxicating allure of warm ocean breeze, soft sand, and soothing surf quickly sank talons into me and threatened to sweep me off my trail feet.

Yes, I do hate transitions - both ways. Zero days are bad. Double bad. Bad to start, bad to finish. Bad to the bone!
Posted by PJ Wetzel at 9:02 PM