Beautiful day in the wilderness 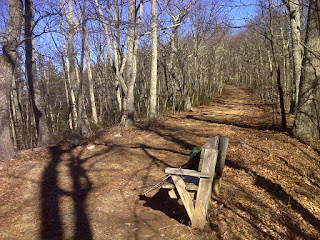 Friday, January 6, 2012 - Day 6:
The weather returned to unseasonably warm. Temperature in the valley hit 60 with wall-to-wall sunshine. And it was a very different trail day compared the the last few. The trail took me through Brush Mountain East Wilderness - a newly designated (2009) wilderness area. It was 14 miles of pleasant walking through interesting geography, but with none of the spectacular vistas of recent days.

The photo shows where the AT emerges from the Wilderness Area after a 1500 foot climb from Craig Creek Valley (at left). The trail then proceeds along the former Brush Mountain Road, passing the only landmark of the day - the Audie Murphy Memorial: 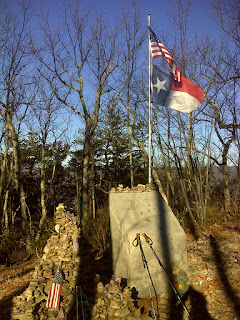 Audie Murphy was said to be the most decorated soldier in WWII. He wrote an autobiography modestly describing his exploits entitled "To Hell and Back" and later starred in the hit 1955 movie by the same name. He was killed in a plane crash near this spot in 1971. As you see, the monument has become somewhat of a shrine.

I did today's hike in two out-and-back segments starting at trailheads at each end, which is why the elevation profile below shows a gap.  The actual miles hiked, as shown on the GPS track map, were 14.48.