What I did while I was playing hooky from the trail

Well, I drove a lot. But I had some fun, too. I took some time to drop in to the Appalachian Trail Conservancy's office and visitor center in Harpers Ferry, WV. There I was greeted by none other than 'celebrity' volunteer Judith "Judo" McGuire, who just had a feature article about her in the July-August 2011 issue of AT Journeys magazine. (She didn't tell me this - I accidentally discovered it later). What an interesting person - she's done a thru-hike and hopes to go back and do another one when she can take the record as the oldest woman thru-hiker. And she's a smart cookie too - Ph.D in nutritional biochemistry. "Judo" has traveled all over the world, both for her career and to do some hiking.

Also had a chance to talk with ATC information services manager Laurie Potteiger - a hard-working staff member. I'm going to, at least partially, take her advice and build some time lag into my public trail reports. That should help make them a little more coherent - they'll have time to 'settle' and get one more revision before I click 'publish'. 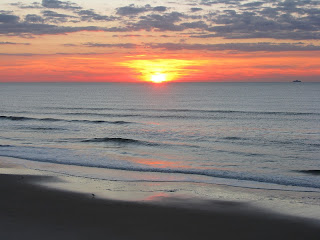 I could have finished all my off-trail business in 48 hours, but it would have been one long frenzy of activity, so I took an extra day to be just a little lazy. That gave me a chance to spend a night at the beach and wake up to this pretty sunrise.

Then it was time to get back on the road, heading 'home' to the trail. I drove a highway I've never driven before, and suddenly, while rambling up US 52 northwest of Greensboro, NC, approaching the VA border I came upon this: 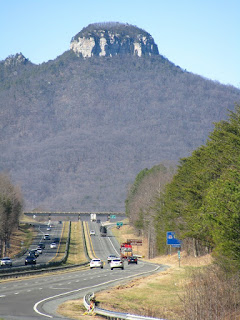 This is Pilot Knob, or Pilot Mountain, and it has its own state park. I didn't even know this existed! It was a day of unlimited visibility and there's a road that takes you up to the secondary peak you see in the left of the photo above. So without bending my schedule out of shape, I had a chance to get to know Pilot Knob up close and personal. 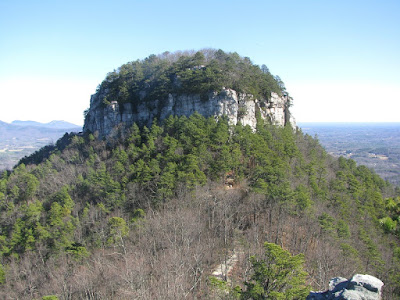 I ran across a park ranger and asked him about a trail to the top - seems there used to be one, a stairway, but it fell into disrepair back in the 70's, and then they discovered some rare species up top, so now the peak is basically closed to the public. Serious rock climbers can still get permits to climb some of the challenging routes and faces, but that's about it.

It's really an isolated mountain in the midst of the flatland. It reminds me of a mini (east coast scale) version of Devil's Tower in northeast Wyoming. And today it was visible from 50 miles away as I drove up the east front of the Blue Ridge Plateau on I-77 - that long, grueling climb that truckers dread.

When I got up to these higher elevations it was chilly and quite a bit more windy--just the weather I had hoped to avoid by taking my zero days now. The forecast for the next few days looks better - pretty darn good, in fact. Can't wait to get back into full-bore hiking mode!
Posted by PJ Wetzel at 6:36 PM