Playing in the rain 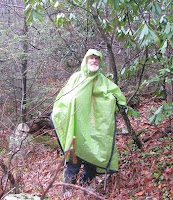 Wednesday, January 11, 2012
Rain was forecast for today and logistics of the upcoming trail crossings reinforced my choice to take an easy 6 mile day. What's more, today's six mile section had two access points from VA 635, so it was a perfect day to play with rain gear. If something didn't work out, I could switch gear quickly.

I broke out my poncho/tarp for the first time and tested it, learned how to work with the 'sauna' it creates inside its non-breathing fabric, and generally tromped around in the rain. The poncho keeps the rain out, but only keeps me dry if I can avoid sweating. You have to wear about a layer and a half less underneath to keep from overheating. Bottom line is that I now have two equally viable alternatives for hiking in a cold rain - what I choose will depend more on whim than logic.

Other than being absorbed with gear testing, the highlights of the day were three:

First was a massive tangled blow-down across the trail that could only be negotiated by crawling on hands and knees - worst trail blockage I've ever encountered. 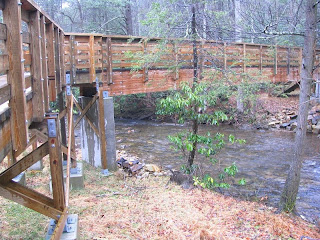 Second was the spiffy new (2009) foot bridge over Stony Creek. This seems designed to withstand a magnitude 11 earthquake, a thousand-year flood, and a tornado all at once. What a statement! It's clear that the AT is increasingly becoming a magnet for well-funded government projects. That's good to see in the sense that the future of the AT seems secure. But I sometimes wonder how many starving children in Somalia ... 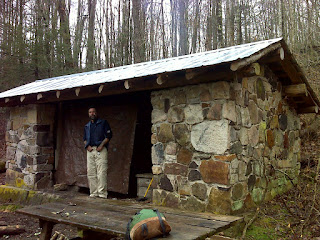 Highlight 3 was a visit with 'Thor', a long distance hiker going northbound from Springer Mountain, GA to Harper's Ferry WV. He was holed up in Pine Swamp Branch Shelter taking a zero day because of the rain. This shelter is one of very few stone shelters with a fireplace inside. Thor seemed very cozy in there despite the miserable weather. He had met Peter, the SoBo hiker doing exactly the same section of the trail whom I met on Monday. Peter looks to get into Pearisburg today.

OK, those were the three highlights on the trail. But there was another highlight - I finished my game playing in the rain at 1:30PM, so had a chance to head to the Kroger in Blacksburg where I splurged on a little brew: 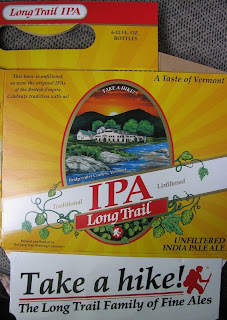