Sunday, January 15, 2012
When you hike in snow, you either need snow boots (which are brutally heavy), or you hike in less-than-waterproof shoes that let your body heat melt the snow, then let that meltwater percolate ever so perniciously into your socks.

That happened to me yesterday hiking in half an inch of snow wearing my lightweight trail running shoes. Today there was another half inch of snow on top of yesterday's.

First was the morning two miles from Sugar Run Gap parking area to Doc's Knob Shelter and back--weather was cloudy/foggy, spitting snow and accumulating hoar frost on every twig and needle, easy grade and smooth trail and one vista at which the clouds parted enough to give me a view. I won't bore you with the hazy view. At left is the ambiance shot.

Now ... I need to vent here ... at Big Horse Gap the former AT, now called the Ribble Trail, blue blazed according to the guidebook, splits off and provides a serious short-cut for the non-purist. It took me nearly half an hour to find any sign of that side trail. It is notably NOT MARKED along the AT, which is either a gross oversight or a deliberate, puckish attempt to keep the non-purist, non-local hikers from finding it.

I finally found a sign that was posted well out of sight of the current AT where an unmarked crossing that simply looks like another fire road intersects with the main forest service road at Big Horse Gap. Furthermore, I could find NO blue blazes anywhere along the stretch of the Ribble Trail from Big Horse Gap past where the current AT crosses it - NONE (and I really looked) despite the protestations in the official guidebook that it is blue blazed.

To further beat the dead (Big) Horse, this seems a deliberate attempt to hide, conceal or obscure the presence of the Ribble Trail shortcut. And the presumed pettiness or incompetence of the trail stewards of the Roanoke Club became the focus of my flaming ire. Rather than serving the trail users, they seem to be deliberately withholding information from them. The guidebook and latest map edition are vague and inadequate in describing the crossing ... and it NEEDS TO BE MARKED. ... Okay, enough ranting (big sigh). 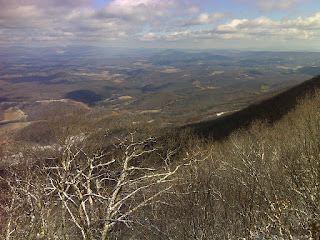 From Big Horse Gap to a broad ridge topped by communication towers (barely visible through the trees in winter), the trail is gently sloped and winding. Then it picks up an old road grade and follows it for 1.8 miles. That road grade just ends in the middle of nowhere. The trail doesn't veer off the road. It reaches a cul-de-sac and *has to* decide where to go on its own. It decides to ascend to the well-defined spine of Sugar Run Mountain where there's an excellent viewpoint, with a broad panoramic view of Pearis Mountain, the Wilburn Valley, and far off to the southeast to Walker Mountain (the original location of the AT *very* long ago) and beyond (shown at left).

Finally, Sugar Run Mountain comes to an end and the trail begins a fairly steep 1500-foot descent to the Wapiti Shelter in the Dismal Creek Valley.

Dismal Creek is a big stream, even this far up the seven-mile-long section of AT that follows it. You have to cross it before you get to Wapiti Shelter. Correction ... you have to FORD it. The 'steppingstones' are under water. There's no way to stay dry this time of year with the creek as high as it is.

Important tip for day hikers - carry a set of dry socks. Fortunately, I had been clued into that tip, so my feet were dry and toasty for the return trip.

All in all, it was a long, wearying, but memorable day. I hiked eighteen miles and what did I get? A little bit stronger with my daily goal met.

Here is today's detailed GPS track with an elevation profile thrown in for good measure: