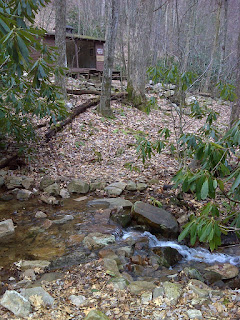 Vaught Branch is a tributary to the Middle Fork of the Holston River. It comes down off Glade Mountain, tumbling like a gymnast over mossy boulders. The AT follows it gleefully for more than a mile. In the first volume of my distant future trilogy, The Ice King, I describe such streams in terms of their playful living spirits:

"Their path took them through a stretch of primeval forest new to Adam. As with most of Willam’s trails, it followed a skipping run, pure and innocent as a child’s laugh. The little brook gurgled and darted like a mischievous sprite among the boles of lordly hemlocks. It tugged on mossy beards of cranky root, tickled toes of scowling boulders, played tag with ghostly crumbling skeletons of the forest’s severest fallen monarchs; then it dashed away and hid under mounds of leaf and litter, only to spring forth and join the teasing game again." 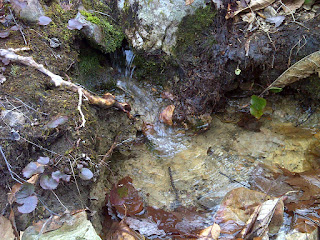 Vaught Branch starts here - spilling vigorously out of the ground literally right on the AT at 3500 foot elevation with its pure cool goodness. And down it tumbles, with all the energy that a thousand foot of elevation change can provide. The AT crosses it seven times, one of which is right beside the Chatfield Memorial Shelter, shown above.

In more than 500 miles of the AT that I've hiked, this is the shelter with the most delightful ambience - nestled among Rhododendrons and within sight and sound of the cascading stream. It's where I want to live! 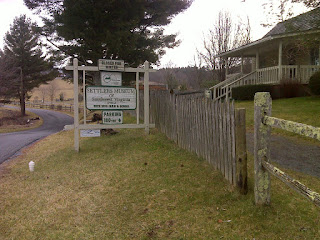 OK, to put this in some perspective, I started the day at the very pretty (but closed) Settler's Museum, where there is a huge parking area that explicitly welcomes AT hikers. I hiked north to the vicinity of I-81 and its rampant civilization: 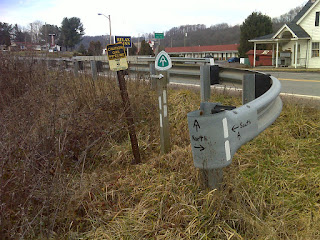 On the way I passed plenty of varied and interesting terrain in a convoluted 2.7 miles of AT hiking that takes only a mile by the (not straight) road.

Then, after returning to Settlers museum I hiked south, quickly taking up the idyllic ramble along Vaught's Branch. The trail finally tops 4100 foot Glade Mountain with a wonderful vista of the Great Valley (the domain of I-81 for hundreds of miles): 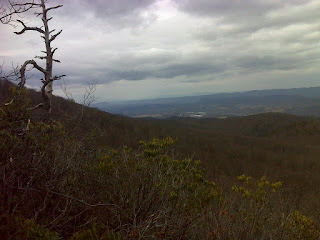 Then there's the spooky 'Enchanted Forest' along the ridge of Glade Mountain. This photo almost grosses me out. I call it "Say 'ahhh'". It's a cherry tree that has somehow sent a root *into* the gaping maw of an adjacent tree. How this could have happened escapes me. 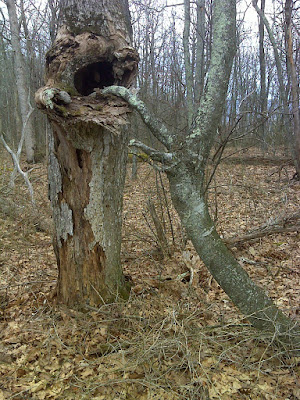 What's more spooky is that this root looks like a hand sinking its fingers greedily into its neighbor's mouth: 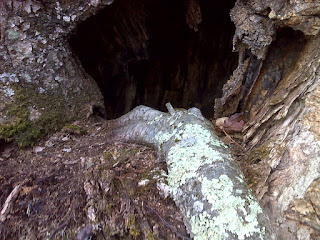 Then there's this example of a bewitched tree - just one of many, many distorted, contorted, tortured, and twisted specimens. 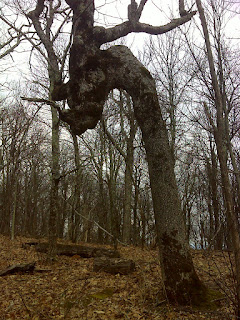 And the enchantment seems to spill down the mountain as well. I later found this 'Howling Apple Tree' while returning to town on the mile of road between US 11 and the Settler's Museum: 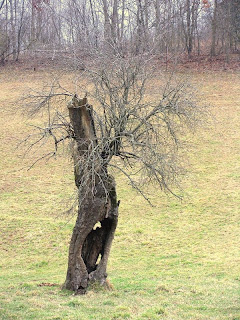 Apple trees are notorious for refusing to die even in the face of unspeakable torture. I've seen other examples over a lifetime of observing and admiring what trees manage to do.

And finally, back to Glade Mountain - on the upper slopes, in the shadow of the Enchanted Forest, and right on the footpath of the AT, I found this ... this ... uh ... WHAT IS IT? It appears to be a fungus or mushroom, ... which takes on the appearance of a flower. Does this fungus require some sort of 'pollination'? 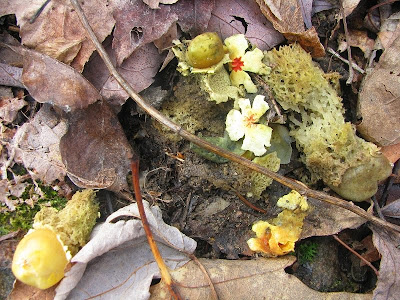 In all, a stupendously interesting day, and unseasonably mild as well - temperatures in the 60's all day. And it was another day of human isolation - no one else shared the trail with me.

Of course there's always the evenings back in town. Back in Marion, I checked Macado's in the old Historic District - pretty place, very upscale restaurant, and they confirmed that 'Rambunny' worked there, but she wasn't there at the moment ... and they refused to tell me when she was working. That was the end of that, excuse me for asking! And then ... AYCE at the KFC buffet! I can't believe how much I can pack in -- and they gave me the Senior Discount! Life's good :-D

Thirty Six photos along the 15 miles hike today, all available as they are located along the GPS track. For details click below:

AT Day 26 - Great Valley and Glade Mountain at EveryTrail
EveryTrail - Find the best Hiking in Virginia
Posted by PJ Wetzel at 8:56 PM