A walk in the Rice Fields 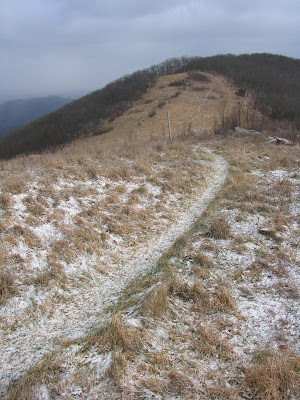 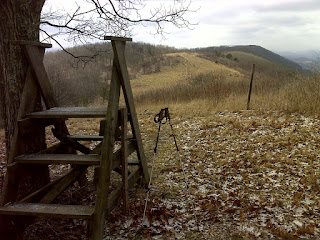 I never tire of walking these rolling mountaintop pastures. Even on a day when the wind seems to eat through every layer of clothing you've mustered against it, even when the sky looms gray and pallid, laden with snow, there's just something idyllic about following a gently meandering trail that you can see spread out before you.

The official Appalachian Trail guide is silent on how the Rice Fields got their name. I couldn't find anything on the internet either. So I'm left to speculate that the land was once owned by a farmer named Rice.

In 1996 the US Forest Service, in conjunction with the Outdoor Club at Virginia Tech built a shelter there: 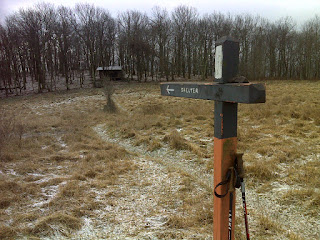 And in that shelter was their logbook. There I was delighted to find that the last two entries were from the two long distance hikers I've met in the last several days, and the only two human beings I've met on the trail since Sunday. I met Peter on the first rainy day of two this week. And I was sad to see Peter write that his 'expensive' rain gear had failed him, so he was going into Pearisburg to buy some 'plastic'. Hope all worked out well. Thor's entry was dated 1/??/12. He's that kind of guy - I'm sure he really didn't know what day it was, because it really doesn't matter. He's been hiking the AT since he was 8, and according to his count, he's now 51.

And yes, for the second day in a row I hiked (seventeen miles today) without seeing another human being ... until ... near the end of the day when I hiked through the little hamlet of Bluff City (a 'suburb' of Pearisburg - if sleepy little mountain towns are permitted to have suburbs) I greeted a young fellow crossing the street on one of three short road-walks along this bit of trail. His comment: 'sure got cold' pretty much summed it up.

Beside walking that residential neighborhood, your AT experience in Pearisburg includes emerging from the woods to see the huge Celanese industrial complex, walking the company's private underpass of whizzing US 460, climbing a substantial AT-exclusive staircase, and crossing the New River on a dedicated walkway. 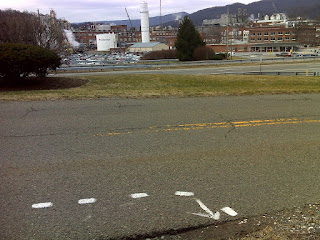 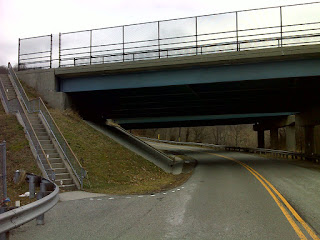 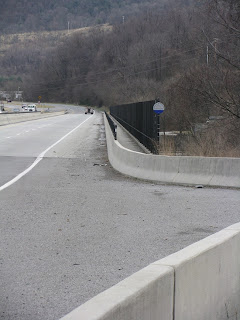 So the day ended far from the idyllic Rice Fields, but the variety made it an entertaining day despite the bleak weather. It's all good. Tomorrow I get to tread where ... 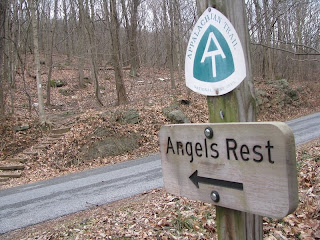 See below for the detailed GPS track I laid down today, along with the elevation profile.