Are Trekking Poles just a fad? 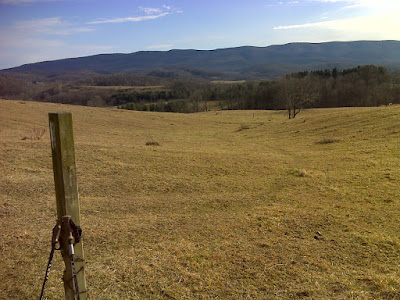 ... or nothing more than a hiker chichi fashion statement?

This is a surprising question, coming from one who has sworn by and defended trekking poles ever since I bought mine four years ago. I find they help with balance when you slip or trip, and they can keep you dry on a dodgy stream crossing. But do you really want to drag them for all those miles just to help help you get through a few precarious moments? The answer, I suddenly realized today, is a definitive *NO*!

So why have I sworn by trekking poles all these years. The one constant they provide me is a set of 'front legs'. I actively use my poles to support my weight and help 'pull me up' when ascending. And sometimes I use them as 'brakes' on steep descents. I'd estimate that with poles I do about ten to fifteen percent of my climbing with my arms. It makes hiking a bit of an 'upper body workout', and I like that.

But when my right arm went 'lame' a few days ago (actually a pulled or strained muscle in my back, just below the shoulder blade), I found that the use of the trekking pole to support my weight only aggravated the injury. So suddenly I found myself just dragging that pole along most of the time, or carrying it like a drum major's baton, except when I needed it for balance, which was very seldom.

Yesterday afternoon I left my poles behind and didn't miss them. Today, out of habit, I brought them along, using them as I always have until my back muscle started reminding me that it wanted more rest. So after a mile and a half of a seven-out and seven-back leg, I decided to stash the poles, to be picked up on the way back.

Instantly I felt a significant sense of relief - suddenly I didn't have to drag those useless poles around any more. Suddenly I realized what a burden they are - keeping your hands tied up, making it tougher to do micro-adjustments to clothing to regulate temperature, or just to grab a bite to eat without stopping. Suddenly I felt liberated, and shocked that I felt so!

Had I been deluding myself all these years? Had I simply assumed that poles were 'the thing' because all the serious hikers used them? Were all those 'serious' hikers really not? Were they 'posers', interjecting themselves into the realm of the 'serious' by spending a hundred bucks for this fab piece of gear? Well, I don't have the answer to those questions. But what I do know is that until my 'lame' right arm gets back into business, I'll be hiking with one pole or none, and the better for it.

The internet is full of trekking pole pro-and-con discussions. Here's the one that popped up first in my Google search.

OK, now to today's sixteen miles. I don't have any more 'knock-you-out' photos to show, though the hike held my interest as I traversed varied terrain, ending with a road walk under I-81 at Groseclose/Adkins. Most of the day was in woods, but the vista from the pasture provided the best scenery.

Today's section of trail, as described from north to south, began at the top of Tilson Gap on Walker Mountain. The actual low point of the gap is a quarter mile from where the AT crosses the ridge, in order to connect with its narrow public corridor on the western flank. On the way down the east side the trail first follows the old deeply eroded Tilson Pass Road/Strawberry Road. About a third of the way down the 900 foot descent the trail designers decided this road wasn't good enough for them, so despite the fact that the trail closely parallels the road all the way to the Reed Creek campsite and trail junction at the bottom, it never again makes use of the road bed. 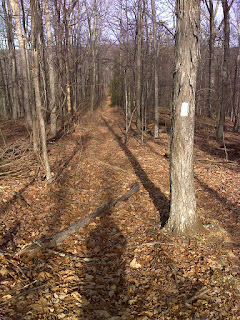 From the valley campsite the AT begins a pleasant 700 foot ascent up Gullion Mountain through varied wooded terrain. 'Gullion' means 'person of little worth' or 'stomach ache' depending on who you ask. Yet I found the mountain to be entirely worthwhile and free of stomach pain. As you reach the summit, you pass between two tall old white oaks, then traverse the summit ridge on several sections of 'straight path', to borrow a phrase from Islam.

As you descend off Gullion Mountain you find a short steep section of 54 log steps; and then for the next mile and a half you follow the arc-shaped feeder ridge over half a dozen knobs each with its short but strenuous climb and descent. The trail only finally gives up this knob-hopping in order to wend its way down past the former Davis Path Shelter, which was demolished in 2009 'due to misuse'. What remains is the platform on its foundation, the picnic table, and the composting privy. You ascend briefly and then follow a spur downward through unremarkable open woodland all the way to the pasture shown at the beginning of this entry. Beyond, you cross Davis Valley Road (VA 617) and cross overgrown meadows, a wetland and stream called Dry Run, and then emerge at the I-81 underpass on VA 683.

There I checked out The Barn restaurant where three-time thru-hiker and former hostel owner 'Rambunny' worked until recently. But the boss informed me that she's moved on. She now works at Macado's (pronounced MACK-a-doo's), a franchise restaurant in downtown Marion, which, I'm sure, rarely sees an AT hiker. Near the interstate I met one short-distance day hiker in shorts and t-shirt out enjoying the balmy 60 plus degree afternoon.

Having crossed I-81, I've completed 180 miles of trail (measured one way), and the entire Virginia section of the AT that lies west of this interstate. That was my original goal for January. I finished way-early because the weather has done me right. I expected some zero days because of snow.

And I hike on. Everything else I accomplish this month, with or without trekking poles, is pure 'gravy'.

For full detail, photos, and data from my step-by-step GPS track, click below:

AT Day 25 - Walker Mountain to Interstate 81 at EveryTrail
EveryTrail - Find the best Hiking in Virginia
Posted by PJ Wetzel at 7:31 PM