Bit by the Dragon

Had big plans for today - between 14 and 15 miles to hike. And then I ran into the
Dragon. Or to be more specific, the Dragon's Tooth. 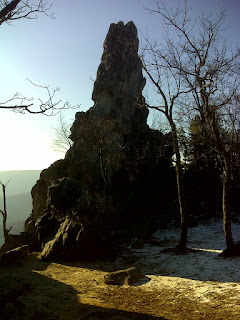 Now the problem wasn't this impressive crooked monolith itself, but the climb to get to it. The Appalachian Trail on either side of this summit consists of some nasty rock climbing - Class 3 scrambling in places (meaning you have to use your hands and can be seriously injured if you fall). There were even two places where they had installed metal bars as steps to get up a rock face.

The problem: To borrow a line from Robert Frost, I had miles to go before I sleep. It took me 3 hours and 20 minutes to travel just four miles up Dragon's Tooth and down the other side. Then I had to do it all over again.

Now I'm not complaining, mind you, and I wouldn't have missed the experiences of today. But when the old Dragon came face to face with my overactive human propensity to anticipate - to make plans, set goals, and have EXPECTATIONS - the Dragon won.

OK fine - I'm way behind schedule. One thing I refuse to do is hurry down the trail and sacrifice the full experience for the sake of logging miles. I've seen too many grim-faced thru-hikers racing along, huffing and puffing, eyes focused on the ground in front of them (there's an important rule about AT hiking - if you want to look at the scenery, stop! Otherwise you'll twist an ankle, trip, or worse.) They look entirely unhappy - and entirely out of touch with anything but 'eating trail' to get to their planned destination. Sad.

So it was time to consider plans B, C, and D. I could shorten today's hike, I could do my first late evening hiking (using my headlamp), or I could walk faster between stops for 'smelling the roses'. In the end I chose a little bit more speed, particularly on the uphill sections where my knees don't complain, and I resolved to finish in the dark if necessary. (Since I'm going out-and-back, covering every step of trail twice, I'd still see everything in daylight at least one way).

Well, as it happened, the trail smoothed out much more than expected in the latter half of today's route, so I finished just after sunset anyhow. Normal service resumed. The ol' Dragon bit, but he didn't have the stomach to swallow me whole.

Most of the day was spent walking the rocky spine of Cove Mountain. There were some nice views, and I'll leave you with the best of the lot: Looking northeast toward the mountains I've hiked all week. McAfee Knob is the mound left of center. Below it, extending to the right, is Sawtooth Ridge. And if you squint through the haze, you can see the two Peaks of Otter (Flat Top and Sharp Top) to the right of McAfee. 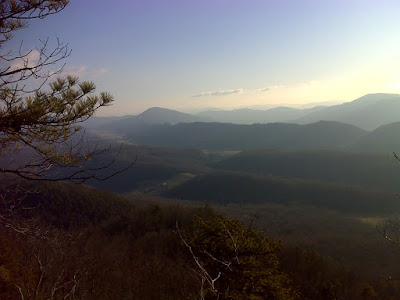