A day in the valley (for a change)

Monday, January 16, 2012
Most of the Appalachian Trail seeks out mountain ridges and peaks. It gravitates to them because of their scenic vistas, their rugged remoteness, and their outright hiking challenge.

Sections of trail that follow stream valleys are much more rare, but they always delight me because I love the sound of water (as in babbling brooks, cascading falls, and (yes) rolling surf on the beach). The problem here in the east is that most stream valleys are productive, private lands.

The Dismal Creek valley is an exception to that. Because of its black shale substrate, the soil is very acidic and poor for farming, so this seven mile stretch of scenic valley is unpopulated. The designers of the AT pounced on the opportunity.

I'll feature three highlights of the varied terrain on today's fifteen miles of hiking. The first was right at my starting point for the day: the impressive AT-dedicated footbridge at Kimberling Creek - a cable-suspension bridge: 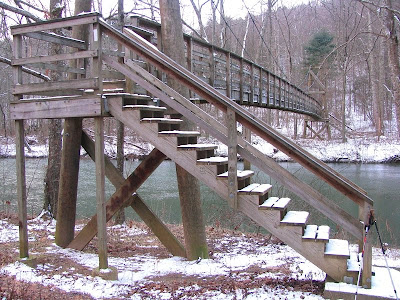 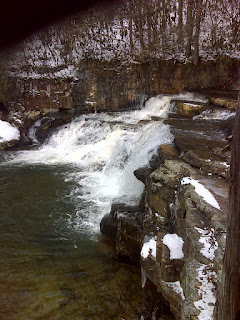 Second is Dismal Falls - a quarter mile side trip from the AT. For my tastes, Dismal Falls rates a 'meh'. It was worth the side trip on an otherwise relatively routine stretch of wooded trail if you're not in any particular hurry. It's really little more of a cascade than the thing called 'McKeldin Rapids' in Patapsco State Park back where I lived in Maryland. I was following two sets of footprints going my way this morning (no return prints), and they did not bother to stop at Dismal Falls. (I did not see anyone in person on the trail again today - third straight day - but these footprints provided a little 'company' and entertainment - I'm easily amused).

Finally, after spending some enjoyable time following close beside Dismal Creek, the trail took a 'walkabout' and passed through some stately groves of mature white pine with their cathedral-like canopies and complete lack of understory. Here's a typical view. I like to feature nice trail views that include white blazes, so as to be able to demonstrate that the shot was taken right on the AT. In this image, if you look closely, you can identify five white blazes: 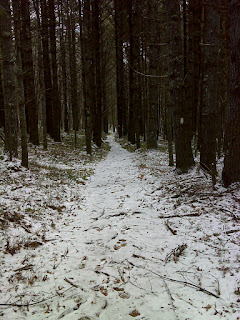 The weather gave me a break today. It got above freezing for the first time in three or four days, and a line of showers held off until I was done hiking.

Day sixteen is in the books. I've completed more than 1/20th of the trail now, and looking forward to the other 95%.

Here's the day's GPS track followed by the Elevation Profile: