From Standing Indian to Seated Squaw

Stop. If you believe the word 'Squaw' is a demeaning term, then you've been brainwashed. A vocal, perhaps well-meaning 'politically correct' movement spearheaded largely by Caucasian, western-(European)-oriented activists, wasted their lives through the '70's and '80's trying to censor words from languages and cultures of which they had *zero* understanding.

"Squaw" is a proud Algonquin word for the 'totality of womanhood'. Check here and here for some comprehensive discussion.

Standing Indian is the prominent peak whose profile, rimmed by sunlight, greeted me as I headed south out of Deep Gap on this beautiful summer-like morning (Tuesday April 3rd): 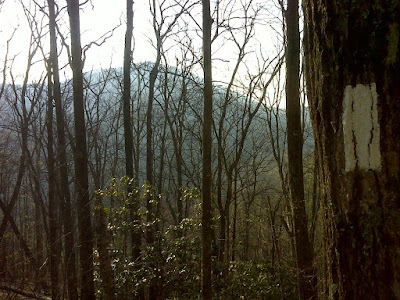 'Seated Squaw' is my name for the distinctive trail tree (with white blazes on both sides) at Bly Gap, at the other end of today's fourteen mile hike: 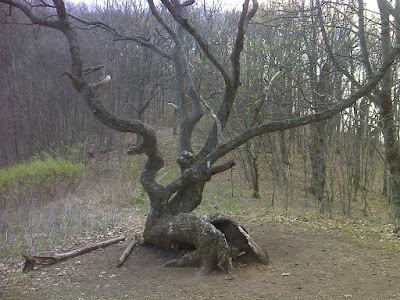 This is Manigebeskwa, Algonquin for 'woman of the woods'. She seems to be holding a child (yes, I have a rich image-ination), and at the same time her other hand is grinding grain using a naturally rounded mano-stone. Her tool was gleaned from the glacial till in far-off 'New England' and passed southward through many generations, by barter and trade, to regions where no glaciers ever existed and where hard quartz rounded stones that perfectly fit in the palm of the hand are items of rarity and value. Manigebesquaw sits nursing her baby and busily grinding the day's gathering of wild grains into flour while the men are off hunting. This is an image I've held in my mind ever since I found such a stone, bearing clear indications of long use as a grinding implement, far from its glacial origin, on property I owned and gardened in central Maryland. 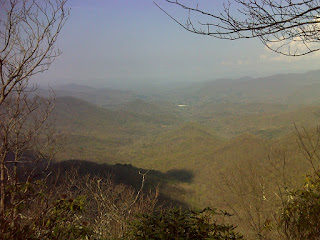 In between the Seated Squaw and the Standing Indian are some tough short climbs that greet the northbounder fresh from Georgia. I had heard multiple accounts of the toughness of this "welcome to North Carolina" gauntlet; and I have to agree with these thru-hikers. The double-step ascent up to Courthouse Bald from Bly Gap is a tough challenge. It starts with a cardio-challenging steep climb, has a 'false summit' at Sharp Top, which leads the hiker to believe the worst is over, but then offers an even tougher climb to this nice vista, and then on to the not-at-all-bald summit of Courthouse Bald.

Once this challenge has been surmounted, the trail eases up some. You drop down to Sassafras Gap and then negotiate a more gradual climb up to a pretty ridge walk with winter views of Ravenrock to your left. There is a half-mile side trail going west to the top of this impressive cliff, which I didn't take - I should have.

Then you reach Muskrat Creek Shelter. I arrived there to find it empty - a rarity in this season of thru-hiker frenzy. I had a few minutes to read the log book, and found a typical cryptic entry from long-ago friend 'Lasher' (WV-GA), whom I met twice near Blacksburg, VA back in January. He had passed through here on February 28th, almost to his goal. Good for you, Lasher!

Then a young woman arrived to take a break, on a NoBo thru-hike. She had red curly locks tucked back into a pony-tail - 'Fire Fox' is her trail name - and we had a nice chat before I moved on. (And as I walked away I began composing imaginary humorous second-meetings with Fire Fox: "Hey, Mo!" "Mo?" "Sorry, I just assumed your first name was Mozilla"). 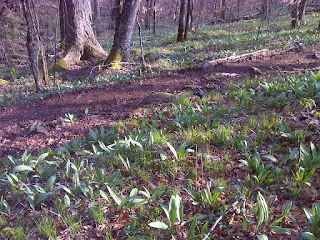 You pass White Oak Stamp (cattle herding locus), Chunky Gal Trail (which may be named for another Squaw, or may be just a distortion of a Cherokee place name), and Wateroak Gap before making the gradual climb and descent to Deep Gap - this two mile section is frequently rocky but not steep. On the descent to Deep Gap I passed this dense concentration of 'Rampant Ramps' - virtually non-existent everywhere else I've hiked this spring. Both slopes rising from Deep Gap seem to be favored locations for this choice edible relative of the leek.

The final story for today is the weather story. I had studied the weather forecast models and expected a strong chance of showers this afternoon, so started my hike early in hopes of beating the rain. Well, somehow, for at least the second time in 2012, luck (my Dad says there's no such thing as 'luck', but ...) seemed to be on my side. Thunder began soon after noon. It sprinkled intermittently as the storms grew and multiplied. All around me heavy rain began shrouding the mountains. Thunder became frequent, lightning scary. Finally, in the last 100 yards before I reached my vehicle, the skies opened up. If I had been five minutes later I would have been soaked to the bone. But I hurtled into my vehicle only superficially wet - my socks, for example were still completely dry. Exactly the same scenario happened to me as I returned to Davenport Gap in the dark after my first 32 mile Smoky Mountain Park hike a few weeks ago. This time the rain was a true deluge, a gully-washer, a blinding downpour that didn't let up for a couple of hours.

It's days like this that I'm ever-so-grateful for my 'two-ton steel tent'. And I don't even have to set it up.

Below is a map of today's hike and a link to more photos: