I have an extra day to kill, so I only hiked ten miles today, then did some extensive scouting of the remote (I thought) Forest Service Road access points along the rest of the 20 miles of Appalachian Trail between Woody Gap (where I started this morning) and Springer. 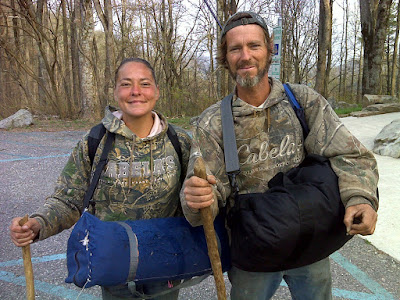 So - to the hike first. I wasn't ten steps from my vehicle when down the trail comes a couple whom I've been shadowing. Today was the fifth time we've crossed paths. Meet the 'Sarasotas'. They are definitely your non-standard AT hikers. First of all they're headed south (started in Franklin - took a bus from their home in Sarasota FL to get there). Second of all, they will keep walking south beyond Springer - road walks I think, rather than the Pinhoti and Alabama Connector and Florida Trail - but I'm not clear on this. Third of all ... just look at their gear! What's in the duffels? Blankets. They do have a tent. And most importantly they have the grit ... and the unquenchable enthusiasm. They say they now have the money to buy some better gear and they want to do more AT hiking. They're naturals - salt of the earth - It will be great to have them back on the trail.

Among the newbie fully-geared northbounders whom I passed today, there was an ever-increasing crop of huffing-puffing struggling folk (of all ages) with huge heavy shiny-new packs, crisp boots, immaculate gaiters, brand-name outfitter 'stuff' overflowing and dangling every which way. (Today's section of trail was 20 to 25 miles north of Springer.) What is it about the mystique of the Appalachian Trail that seems to send otherwise reasonable people's common sense into a tailspin? Yes, there are the fit ones, fast moving, getting on with business. "You - you'll make it" I wanted to say a couple of times. But only a couple, from among the throngs. And finally there is the AT's version of Venice Beach - the 'freak show'. Passed a guy with a bongo today - not a tiny little one either. Yesterday it was funny stuffed duck hats. 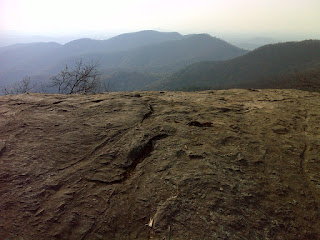 The trail from Woody Gap up to Big Cedar Mountain's summit (with excellent bare-rock viewpoint) is a popular day-hike section; and it shows the wear and tear. It's tougher than most of the rest of the Georgia 'Bunny Trail'. But from Big Cedar Mtn to Jarrard Gap (my turn-around point) the pathway resumes its fairly gentle grading though with quite a few ups and downs of a few hundred feet each.

And speaking of 'Bunny Trail', my afternoon scouting of the road network confirmed a new feature that most hikers may not even be aware of: The first 20 miles of AT has a very competent 'baby-sitter' just out of view, but keeping a protective eye on the hikers nonetheless. The 'baby-sitter' is the road called FS42, or Cooper Gap Road. It starts across from the lake in the idyllic little hamlet of Suches (just 1.5 miles down from Woody Gap) and parallels the trail, intersecting and/or providing parking at Gooch Gap, Cooper Gap, Horse Gap, Hightower Gap and at the Springer Trailhead (just 0.9 miles from the terminus).

FS42 is a high quality gravel road - not at all what I expected because the official Appalachian Trail guidebook for Georgia says (page 202) “all roads are unpaved and often very rough and muddy”. Simply not so. You can drive FS42 end to end at 20 to 30 mph and feel as if you're driving conservatively. It is nearly level, has no sharp turns, no potholes or 'corduroy' spine-rattling sections. Nowhere is it narrow 'single track' road - vehicles can easily pass one another at will. And even after a whole night of hard rain it was *not* muddy anywhere. Yes, it's the AT's baby-sitter - its safety net. An emergency vehicle with a fit crew can get to any point on the trail in under half an hour, I'd estimate.

You're in good hands, dear newbies. You are free to imagine that you have immersed yourself in the wilderness, but it's a wilderness with training wheels. And that's probably a good thing.

Here's a map of today's walk. Click on the link (the title) for a connection to more photos.

AT Day 84 - Big Cedar Mountain at EveryTrail
EveryTrail - Find hiking trails in California and beyond
Posted by PJ Wetzel at 8:07 AM