Some of the easiest trail in the southern half of the AT is located in the Southern Nantahala Wilderness, through which I hiked today (Monday April 2nd). It was easy even though it hit me immediately with a long climb from Deep Gap up more than 1000 feet to Standing Indian Mountain - easy because the climb was accomplished on an old woods road with very gradual grade. Then it was an even more gradual descent on the north side. Finally you reach Ridgepole and Little Ridgepole mountains with an interesting tunnel-walk through Mountain Laurel along a knife-edge ridge. The one and only break from the woods walking all day was 'the light at the end of the tunnel' this vista at my turn-around point. 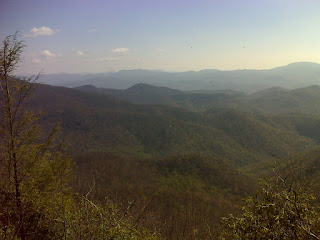 There really wasn't much else to photograph. When the trail gets ordinary, sometimes I like to spice it up. The 'AT Logo Phantom' made another appearance this afternoon. This only took me 30 seconds to construct: 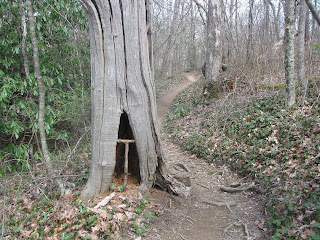 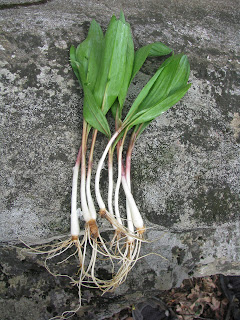 At the end of the day, I also found a southern delicacy that I've been hoping to try - wild leeks, called Ramps. I picked and cleaned a few and hope to incorporate them in a dip or other recipe when I get home for a break in a couple of days. The flavor is a distinctive combination of wild garlic and water cress - a strong clear flavor worthy of its reputation as a spring treat.

But the headline story of the day wasn't about the trail directly, but about the people I met. Here's that tale, transferred from my personal journal:

First of all, at Standing Indian Shelter, just a mile in from the start, I barely stopped to photograph the shelter before resuming the gradual climb on an old road up Standing Indian Mountain. A couple came out of the shelter soon after I passed and were following me up the mountain at almost exactly my pace. I picked up my pace a little and they were out of sight, but caught up with me again on the way down the other side. It was a funny situation because they didn’t talk to me (and, stupidly, I didn't initiate a conversation) and they didn't seem fast enough or interested in passing me. So eventually, preferring to hike out of earshot of them, I increased my pace on the totally smooth trail.

I didn’t see them again until the next shelter – Carter Gap. And the story at that shelter only added to the interest. I was taking my usual photos of this shelter – one of the less easily photographed because it faces a tangle of woods – when someone from the deep shade inside asked if I was ‘Seeks It’. It turns out it was ‘Gutsy’, who I met much farther north as she was hiking with ‘Patches’ and two guys they had just met. Patches has the ‘WatchBethHike’ blogger blog, which I may have mentioned.

Gutsy decided to get off the trail after a heart-wrenching phone conversation with her young granddaughter who missed her terribly. Apparently she’s very much of a hands-on grandma. She said she ‘has them’ two days a week, referring to grandkids, I assume. So what was she doing on this section of trail that she had already done this year? She was with two friends who began their thru-hike March 18th, just offering them her hands-on support and advice and encouragement. Gutsy, it turns out, did a thru-hike back in the late 90’s (if I got my facts straight). Now she was hiking with ‘Navigator and JK,’ who were working their way into shape doing just about 8 miles a day.

Navigator, it turns out, is Sandra Friend, who is a published author of fifteen guidebooks about Florida, half of which are hiking books. She has a good web site at ‘FloridaHikes.com’. JK is her husband. It turns out that ‘Gutsy’ is Sandra’s ‘idol’ regarding hiking, at least AT hiking. They met hiking around Lake Okeechobee.

Gutsy seems like the kind of person who has other accomplishments that would be interesting to know about, but she's too modest to volunteer the information. She has a son who lives in Fairbanks, AK, so I mentioned Kris Capps to her – my friend from grad school days. This is sort of an oblique connection since Kris wrote the definitive book on hiking around Denali, and Gutsy seems to gravitate toward such authors. 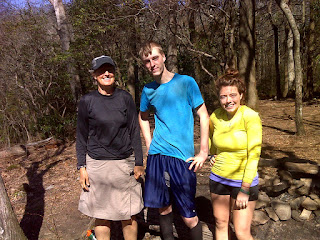 While we were talking at Carter Gap Shelter in comes the couple who had been tailing me. Turns out they had met Gutsy, Navigator and JK previously, staying at the same shelter at some point. More connections. So soon I was talking with them also, and got a photo of them with Gutsy. They are obviously in seriously good shape – doing a 20 mile day today to get to Franklin (started the trail on March 25th). Their trail names are Smoke Hawk and Snake Runner. Snake Runner does marathons, and Smoke Hawk didn't admit to any pre-hike training, but it's clear he's pretty physically active, and a mentally tough guy.

Some of this information I learned at the vista on Little Ridgepole where we all met again. It was bittersweet letting my five new trail friends go on north while I had to backtrack to Deep Gap. But I have a feeling I may run into them again. Even Gutsy suggested she may get back on the trail farther north later in the year. I hope she does.

Here's the route of my hike plotted on a map. Click the link for more photos.