The Dragon of Shikellimy Rocks

The young Dragon of Shik'limy Rocks
Hates when hikers start passing in flocks.
-----Last week he, in ire
-----Set the AT on fire,
So NOW they'll get ... 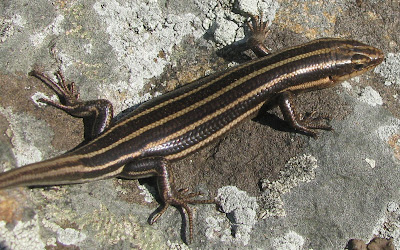 You see ... he lives directly on the AT, at a ridgetop rock outcrop on Peters Mountain with a half-decent view called Shikellimy Rocks, and he doesn't like to be disturbed when he's sunning himself. 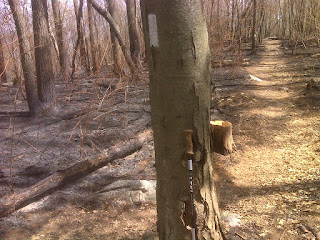 So here's the result of his little temper tantrum: The fire was under control by last Tuesday, and was reported to me last Thursday by the receptionist at the ATC regional office in Boiling Springs, but she said not to worry, the trail was open. When I passed, it still smelled of smoke, but I couldn't see anything smoldering.

OK, I can't prove that our little dragon friend actually started it. But since the fire is reported to have started on private land down from the trail, my guess is that he's actually innocent.

No, I couldn't see any smoke or embers, but the whole trail felt like it was on fire today (Monday, April 16th). Under a relentless sun the temperature reached the upper 80's by early afternoon and stayed there until sunset. Thankfully I had a short day planned and was off the trail by 2:30PM. 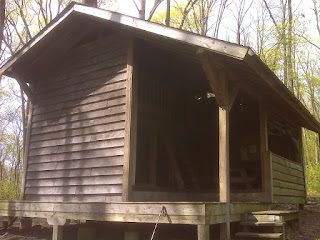 In the morning I met my three North Carolina NoBo section hiker friends again. They had stayed at Peters Mountain Shelter, a near-palatial structure by comparison with the PA shelters I've visited so far. It has two huge sleeping levels and a partially enclosed picnic table area. The guidebook says that the trail down to the spring has 270 rock steps, but I didn't personally check that. 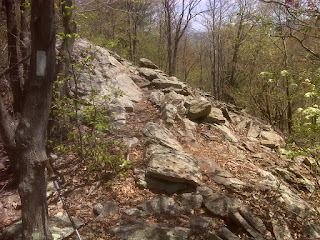 I hiked the remainder of Peters Mountain today and dropped down to PA 325. The ridge walk was easy - there were only three or four very short sections where the footing was difficult, and worthy of the 'Rocksylvania' reputation. I'm talking a few hundred feet total in seven miles of trail. One of those short sections was, of course, where I encountered our little Dragon friend. 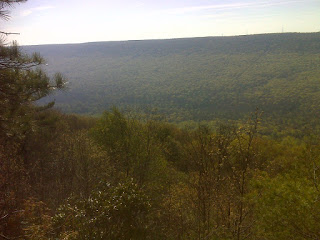 But there were two better spots to view the Clark Creek Valley than Shikellimy Rocks. One is called 'Kinter View', with the vista shown here. The other is Table Rock, at the north end of my walk today.

After my hike I drove back to Duncannon and visited the Municipal Building, where I bought an AT hat and got the official word on where AT hikers can park in town -- the municipal lot on the south side of town near the tracks (between the old train station and the ball field), and the park and ride lot across the river on the east end of Clarks Ferry Bridge: 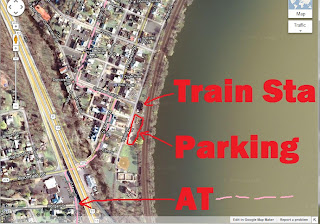 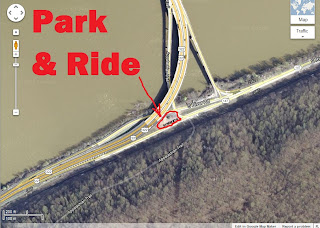 (The preceding has been a public service announcement brought to you by 'Seeks It', who always seeks the most useful information for AT day hikers and other strange animals who may wish to bring their vehicles along on their hike.) 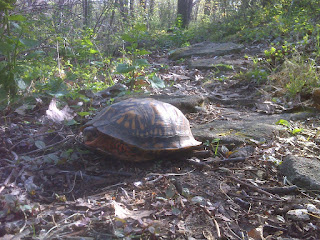 Below is the map of today's route and vicinity, with link to a photo at every spot marked with a red 'pin'.

AT Day 96 - Peters Mountain north at EveryTrail
EveryTrail - Find the best Hiking in Pennsylvania
Posted by PJ Wetzel at 1:58 AM