I'm sorry I have to do this, but time is so short tonight that I'm simply copying my cryptic report from my personal journal.

I was on the trail at 6:45AM, hiking south across the scary, busy highway 183 then past the Fort Dietrich monument and on through a long stretch of eroded ridge-top trail where there are deliberate and ad hoc relocations beside the original eroded trail.  I began to descend from the 1700 foot summit where there are several ‘vernal ponds’, completely dried up because of this dry spring.  The trail drops to 1100 feet at the Hertlein campsite in a pretty valley with a stream springing out of an impressive boulder field. This is the best photo of the day: 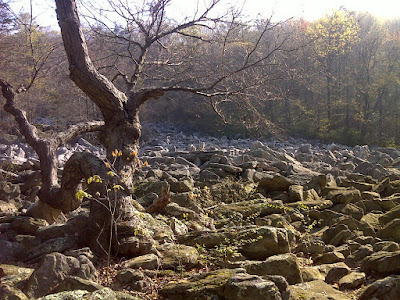 Then the trail ascends again, passing Shikellamy Lookout (not to be confused with Shikellimy Rocks on Peters Mountain a bit west/south), which has rocks where birds clearly perch (white poop stains abound) and a great view.

On from there is a long stretch of occasionally rocky winding trail which gradually ascends with ups and downs until you reach the Round Head lookout – another nice viewpoint and the beginning of the Showers Steps side trail.  There’s also a granite monument near there with an etching of the AT logo in stone made in 1934, and it looks that old – precious addition to my photo collection of AT logos.


From there another long stretch of ordinary but consistently rocky trail took me to the vicinity of PA 501 where the trail begins to level out and smooth out.  I decided to visit the Rt. 501 shelter again before turning around, in hopes of talking with caretaker Bob again and getting more detail about his heart attack on his aborted 2007 thru hike.  I found him in the backyard of the caretakers cabin and we had a great rambling 45 minute conversation during which I got the fascinating basics of his heart attack story (published in yesterday's post).  Then I made the return trip.  I had met no one on the trail all day yesterday or on the trip outbound today, but – perhaps because it was the beginning of the weekend – I met 14 hikers on the way back.  The hike back gave me a significantly different impression of this trail section.  I had considered the rocks relentless on the way out.  On the way back only the truly rocky quarter mile section near the former Kessel Trail (now closed by the landowner – the other end is the Showers Steps) was any problem at all.  The rest barely seemed an issue at all – more in line with the way Caretaker Bob characterized it.

Rocksylvania report:  In summary today's hike had 0.25 miles out of about 9 that were rocky.  The rest was occasionally annoying because you have to watch your footing, but the rocks don't slow you down.  Yesterday was similar.  There was just 0.15 miles of big nasty rocks to traverse, 0.1 miles of somewhat difficult medium sized rocks, and two short 0.05 mile stretches of small rock in concentrations that prevented me from going at full stride.  There was an uninterrupted 3.5 mile stretch with NO rock south of PA 645, and the rest of the ten miles of trail beyond the four rocky bits described above was like today's majority - sometimes annoying but not a real problem.

I stopped again to soak up the view at Shikellamy Lookout, something I don’t often do (revisit a lookout that is not directly on the trail) because it was such a pretty day and there as a nice cool breeze there.  I watched the hawks soaring effortlessly in the updrafts – it must be such a joy to be a bird.

Here's the track of today's hike.  And all the photos I've chosen from today are available from the EveryTrail trip link.  Just click on the title above the map.

AT Day 100 - Showers Steps at EveryTrail
EveryTrail - Find the best Hiking in Pennsylvania
Posted by PJ Wetzel at 4:41 AM