Jesus was only the first anointed human child of the Mother of the Universe.

Because, as prophesied in Micah 5:5, there will be seven messiahs before the end. He prophesied "Seven Shepherds", raised up to defend humanity from the enemy: the inanimate, inscrutable, always destructive Chaos that forever assails us.

Each new Shepherd will teach humankind a more direct 'higher bandwidth' connection with the Eternal.

Jesus taught us how to *pray to* the Maker, to finally achieve that first real connection, through him ('dial-up' bandwidth). The Seventh will teach us to *be* the Maker (unlimited bandwidth).

When you write distant future fiction you get to think outside the box - to play with big ideas - to be irreverent if you choose - to shake up the status quo the way the patient passage of time always does. You get to leap through these great chasms of the temporal chain and bring back results that seem shocking only because of our limited context, locked in one small corner of space-time.

Imagine: an evangelist of the distant future (the eighth Prince of Men, as Micah 5:5 would call him - John the Baptist was the first) mounts his soapbox at a popular Appalachian Trail intersection, raises his arms to gain attention, and cries out: "I bear Amazing News, my faithful flock. Heed my words now: for the day we have been awaiting has finally arrived! The Seventh Shepherd has been born - the seventh Immaculate Conception! ... and he comes among us just in time, my dear people ... to stave off the final extinction of our noble species and to lead us beyond eternity..." 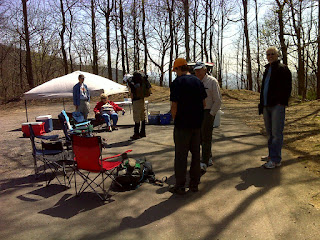 Perhaps that's what an evangelist 'trail angel', set up at a parking area in some far future time, will tell an AT thru-hiker of that era. Well, Richard 'King Tutt' Tuttle, at right, is the kind of 'listen first' evangelist who would indulge me such thoughts. His way of 'witnessing' is all about respect for the individual and their views. Good for him, and Bravo! Not to mention his selection of yummy goodies ...

The parking area is Tesnatee Gap, also my base of operation today (Tuesday, March 27th). I hiked both north and south from there - pretty hefty climbs in both directions, and pretty views from the summits reached. Dueling views in fact. Both Cowrock Mountain to the south and Wildcat Mountain to the north have Stone-Mountain-like surfaces of solid smooth bedrock which look much alike when viewed one from the other. Here's the look from Wildcat: 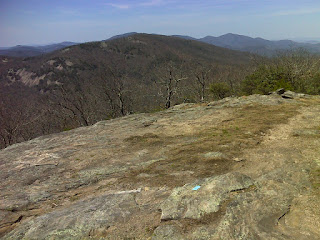 And here's looking back atcha from Cowrock: 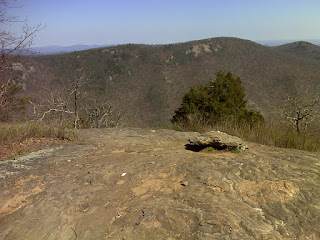 I only got as far as Cowrock to the south. To the north I went on past Hogpen Gap and hiked about five miles of undulating, quite easy trail to Low Gap Shelter. It's up-and-down but on a relaxed scale for the most part - more of Georgia's 'Bunny Trail'.

I didn't count the hikers today - got tired of picking up pebbles. And I failed to ask 'King Tutt' how many he counted (if he counts). It seems I need to focus on my core mission - out-n-back hiking past every white blaze, visiting every shelter, and reporting what I see. The rest is secondary. Life is so full of exciting possibilities, and you just can't do them all. Choices - I've made mine for 2012, and so far it seems a pretty good one. On to Springer!

Here's the route of today's hike plotted on a map, and a link to more photos:

AT Day 82 - Hogpen Gap at EveryTrail
EveryTrail - Find trail maps for California and beyond
Posted by PJ Wetzel at 5:53 AM