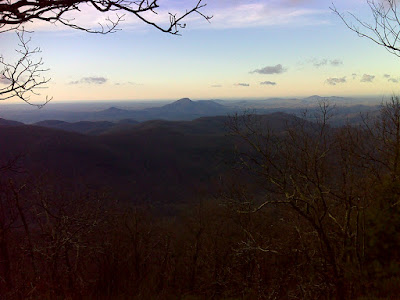 Today, Sunday March 25th, I hiked a marathon distance-wise, but at a pace and over terrain that made it a fun twelve hour trail walk. There were three major mountains, each with 1000 feet of climbing on either side, and each with wonderful views from the summit. So the day was not lacking in highlights.

Nor was it lacking in company. I met 27 southbound hikers on my northbound leg, including a Boy Scout group training for a trip to Philmont (a premier Boy Scout destination in New Mexico). Then I met 67 Northbounders, mostly thru-hikers, and probably missed at least a dozen more because they had already settled at Tray Mountain Shelter when I passed the side trail to it at 5PM. Notable among the thru-hikers today was 'Brightflower' who is a fellow Facebook fan of the Rainwater family. She hopes to catch up with them during the coming week. Likely they'll stay at the same shelter at some point and have a chance to really visit. 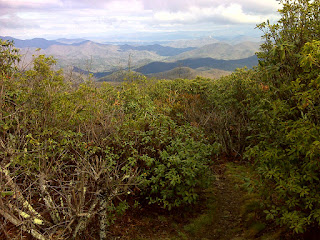 I'm just fifty miles from Springer now. The fresh 'newbie' attitudes of some of the hikers is charming. I hear debates about how much water to carry up the next mountain. Standing at the summit of Tray mountain overlooking the expansive vista (example at left), one hiker remarked "Now that I'm doing this I'm wondering why everybody doesn't want to." It adds a strange skew to the 'sense' of this part of the trail. Ninety percent of these people won't make it, and yet the enthusiasm (or bravado) is rampant. Yes, I pass a lot of huffing-puffing-struggling hikers (including a few hobbling dogs) climbing mountains with pained looks on their faces, asking how much farther to the top (the dogs just lick my hand to get some salt). Having hiked about 1300 miles of AT trail this year already, I suddenly feel like a hardened veteran by comparison. The people watching should only get ever more entertaining in the coming days.

Here's the map of today's hike and a link to more photos:

AT Day 80 - Three mountains with views at EveryTrail
EveryTrail - Find hiking trails in California and beyond
Posted by PJ Wetzel at 5:49 PM