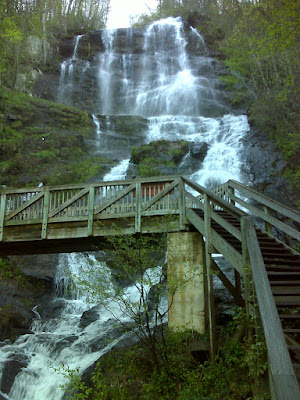 Frankly I had expected Amicalola Falls to be just another excuse to put a state park somewhere - just a pretty place that also just happened to be conveniently situated near the original Appalachian Trail so that it could become a serviceable jumping-off point when encroaching development ruined the Mt. Oglethorpe area's natural setting.

In other words, I expected Amicalola Falls State Park to be nothing special.

I'm a lover of waterfalls. To me, they're a multi-sensory experience. The mesmerizing sight of flowing water set free to tumble, the all-pervading roar and rush that drowns out civilization's clamor, the smell of fresh-water spray, of moss and perennially soaked vegetation, the feel of the mist and the gusty downrush of water-driven air. Yes, I have a taste for waterfalls. And Amicalola Falls is one of the really good ones. 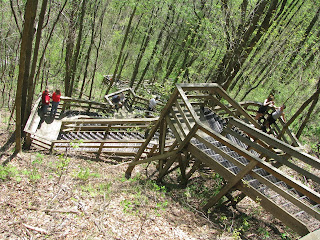 It's good, not just for the show (and recent rains made for an especially good performance) but for the care with which the park developers provide the viewer with a front row seat. The extensive walkway with more than 600 steel-grate slip-resistant steps takes you up and across and around the falls, so that you can fully experience it in a way that you can do with few other great waterfalls. The only thing missing is the opportunity to walk behind the curtain of falling water, but this waterfall isn't structured right for that.

Now, here's my surprising conclusion. I've now hiked essentially the entire southern half of the Appalachian Trail; and today's portion (which isn't even actually part of the trail but is an integral part of most thru-hikers' experiences) is my favorite. It was well worth the $5 fee to get into the park, which I originally grumbled about and begrudgingly doled out. This part of the Appalachian Trail is a toll-route; and it ought to be, with views like these right from the treadway: 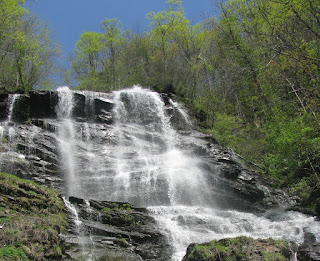 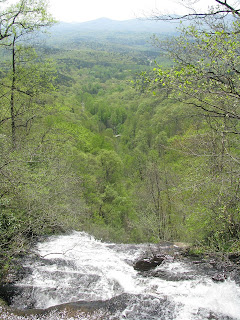 Once the trail leaves the State Park and enters the National Forest, it quickly acquires the typical flavor of most of the next thousand miles. Some sections have that distinctive Georgia red clay underfoot, but those are rare (and are symptoms of unwanted erosion). Although there's another 1200 feet to ascend from the top of the falls to the summit of Springer, almost all of it is accomplished with a gentle grade and smooth footing. There isn't really a picture worth showing until you get to the very end of the Approach Trail, where the sign identifying it is accompanied by a picturesque mountain-top white oak: 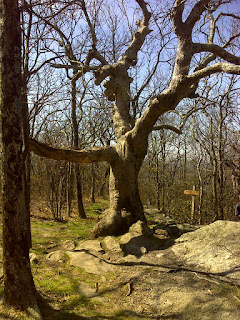 So I have to take you back to Amicalola Falls State Park, because the other end of the Approach Trail is cool too. And for me it marked the end of an 87-day-hike odyssey. From here, I flip north to southern Pennsylvania and begin the trek toward Maine. 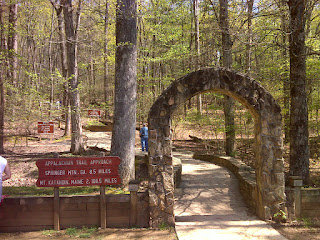 Here's the track of today's final walk in the South. The title links you to a lot of additional photos.

AT Day 87 - The Approach Trail at EveryTrail
EveryTrail - Find the best Hiking in Amicalola Falls State Park
Posted by PJ Wetzel at 8:51 AM