I've come to call the AT in Georgia the 'Bunny Trail' because it's so well maintained and relatively easy walking (although today - Saturday March 24th - there were quite a few semi-steep ups and downs). Novice thru-hikers start on this relatively easy walk, and build up unreasonable expectations. Then come the Smokies! I had this opinion reinforced today from none other than the official AT Conservancy paid Ridgerunner for the state of Georgia. He said that the maintaining club has good financial support and some really dedicated workers.

This is Rhea Patrick. He's actually the second Ridgerunner I've met and spoken with on this adventure - the other was in Smoky Mtn National Park. 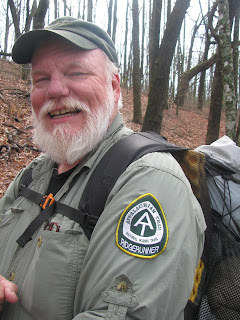 Ridgerunners are always a delight to talk with, and they enjoy sharing their extensive knowledge of the trail. When you run into one, be sure to thank them for their service.

Today's 16 mile hike took me from the very crowded Dicks Creek Gap parking area north to the North Carolina border and back. It offered not one decent vista, so for me the non-human highlight of the day was this tree, which doubles as a natural planter. I'd love to stick some pansies in there and then watch the reaction of passing hikers. 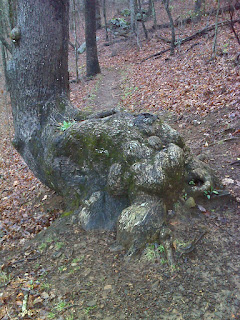 In the people arena, other than the distinguished Ridgerunner, I counted 44 NoBo hikers. I tried a new method to keep count today: picked up a small pebble each time I passed someone. At Plumorchard Shelter I met a couple of young guys getting ready to head out for the day, then I met them again at the state line on the way back. They are Anthony and Tomás, both from Blacksburg, VA. Tomás took my photo, but I failed to get one of them - too caught up in the conversation. Again, I need to become a better reporter. He's carrying a full sized good quality camera. Tomás is of Brazilian ancestry. He has dark hair and those unique Brazilian light hazel eyes. Anthony, on the other hand, has light brown curly hair and looks to be out of the all-American melting pot. He likes to carry a bit of whiskey with him for evening sipping - prefers that to beer.

Tomás and Anthony are 'waiting for trail names to pick them' rather than the other way around. I like that approach - its the true thru-hiker way. Hope to see them up the trail and learn their monikers and hear the stories behind them.

Here's the route of today's hike plotted on a map, and a link to more photos:

AT Day 78 - Into North Georgia at EveryTrail
EveryTrail - Find trail maps for California and beyond
Posted by PJ Wetzel at 5:21 PM