Easy trail (except for the short struggle up the south side of Albert Mountain) made for a relatively easy 25 miles today. Both fog and the geography made for limited photo opportunities, so I'm showing just the one - the afternoon view from the fire tower atop Albert Mountain (see, the struggle was worth it!) 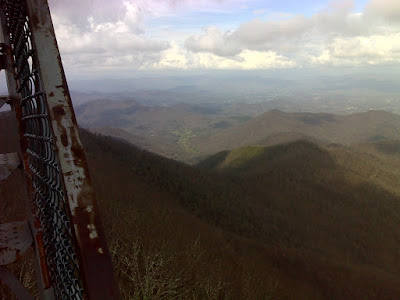 And, for a change, I'm cutting and pasting my rather verbose entry in my personal journal for today, because today the words are worth more than the pictures:

I headed out from Rock Gap fifteen minutes before sunrise, at 7:20 and hiked the fairly short leg north. As I crossed the highway at Wallace Gap my two day hiker friends, who have been hiking south using their two vehicles, came by after dropping one vehicle off at Rock Gap. Today they’re hiking from Wayah Gap (where I had noted their vehicle yesterday but never saw them) to here, so I won’t see them on the trail today either, but I suspect we’ll cross paths again farther south.

I hiked on up to my turn-around point on the ridge of Rocky Cove Knob, just 2.2 miles in all, and then headed back to Rock Gap. I passed a handful of NoBo hikers on the way, and at Rock Gap there were no fewer than eleven thru hikers gathered there waiting for a shuttle to Franklin. One of them made overtures to me: “Are you going to Franklin?” to which I snapped “I’m not going anywhere, I’m hiking.” This kind of thing is what I dreaded, but in this case it wasn’t a big deal. I talked to a few others there when I noticed a car with MD plates, asking if it belonged to any of them. One older guy said it belonged to a red haired young woman who had taken off hiking south, so I asked for more description, hoping to meet her at some point along the way.

I wasted no time with a quick restock, wished the crowd good luck and headed south on the long leg of the day. I reached the Rock Gap Shelter, which is just a quarter mile away at about 9:30 where I met the last two to leave, packing up and talking with one another. One was a middle aged woman named “Blessed Child” and the other was a hiker (can’t recall his trail name unless it’s ‘UK hiker’) from Bristol, England – but he’s not a football fan at all. They both headed out and I wrote in the register and then left.

As I was coming back to the trail the red headed woman was coming down, headed back to her car. I said I knew she was from MD and we struck up a conversation. She’s ‘Gingersnap’ who is a park ranger/law enforcement student at a govt. installation in Franklin. She graduates May 9th and still doesn’t have any job lined up. She thru-hiked the AT last year and was out leaving ‘trail magic’ (food) on up the trail a ways – turned out to be a half mile up from the shelter. She wants to hike the Pacific Crest Trail next, but needs to work for a while first in order to save enough money to do that. She was very talkative and seemed to enjoy our conversation, but we both had places to go (she had class), so we cut it off and headed our separate ways. I learned that she’s on Trail Journals when I got to her elaborate bear-proof hoist at a switchback. There was a sign there written by her. I arrived there just as Johannes from Munich, Germany arrived, so we chatted as we pulled down the container of brownies and sweet bread. There was a log book there too, which we both signed. I couldn’t resist taking a brownie – really delicious home baked goodness.

It was already apparent that the hiker count was going to be huge today. One of the eleven at the parking lot said that 200 people had signed in at Springer on March 15th alone (obviously he must have been one of them). In the end my rough count (lost track of the exact number) was 63 north-going hikers!

I hiked ten miles south in cloudy, foggy weather with a tiny bit of drizzle and one shower serious enough to make me put on my poncho. The hike was largely on very smooth footing with very gradual slopes – good for making fast time. The only exception was the ascent and descent of Albert Mountain, which has a fire tower on top (stairway open but hatch to the observation level locked). It was totally socked in with fog so I didn’t even bother climbing it. Fortunately the weather improved and I got quite good views from there on the way back. Beyond that there wasn’t much but easy trail without views until my turn-around point at a heavily used 25 foot side trail to a vista at a rock outcrop on the ridge of Little Ridgepole Mountain.

On the way back I found the crowd at the Big Spring Shelter just north of Albert Mountain was prodigious—a veritable tent city. That shelter is the closest to a ‘shack’ that I’ve seen – cheap looking particle board, etc.

I checked Gingersnap’s trail magic box and found it well picked through, but still some sweet cakes left. Back at the parking lot I made an attempt to hike to the now dead, but formerly second largest Tulip Poplar in the east (or something like that), but the trail was descending into a hollow and seemed very long (0.7 miles to the dead tree as I learned later), so I gave up and turned around.

I need to mention that both yesterday and today, while on the trail I picked up hiking sticks and worked them on rocks I passed in order to smooth and improve the handles. Today’s stick was slender (easily broken) but very comfortable. I developed a kink in my neck a few days ago which bothers me on ascending unless I hold my left hand up in the air, so I tried using a stick just to prop up the hand (originally the stick from yesterday was just to help me get across a precarious log at a stream crossing, but it turned out to have a quite comfortable tilted handle, so I kept it and found that it did help with the kink if I didn’t use it to support my weight other than just the weight of the arm itself.) Today I deliberately sought out a stick with a similar handle-shaped kink and found quite a good one fairly quickly. Both are freshly dead birch sticks. Tomorrow I may try taking one of my Leki poles instead, though I’ve saved both sticks.

I was back at the start at 7:15PM and headed out before changing in order to check out the Forest Service road to Deep Gap – my parking area for the next leg. As expected (based on the phone calls made by my two day-hiker friends a few days ago) the road was gated – may not be open until April 1st or shortly before that. Deep Gap road is the only access to a very long remote stretch of trail. I need to park there and hike ten miles of trail on each side of it. So I’ll have to defer those two legs –the last two in NC. So tomorrow I’ll move to Georgia.

Here's where I hiked, plotted on a map. And with it is a link to two dozen photos documenting the hike: