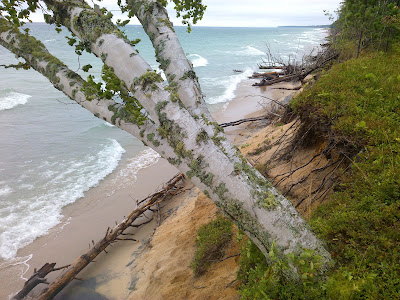 The North Country Trail follows the shores of Lake Superior for a long way across the center part of Michigan's Upper Peninsula.  It's one of the big attractions of this trail.  This part of Lake Superior is so wide that the shore on the other side is out of sight.  Because it also has long stretches of beach, it's feels more like an ocean than a lake.  In this report, I cover two days of hiking these great shores, both cloudy summer days, cool with temperatures in the 60's F and wind off the lake bringing the wonderful sound of the surf.

But I couldn't walk as much beach as the trail offered.  The first of the days was shortened by rain, and found me abandoning the trail route in order to finish.  I had to skip another section of lake-side trail the same day because it required a significant river ford.  Here's Hat number 54 with the river in question. 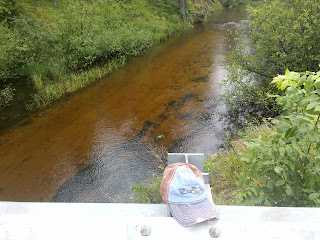 It's called the Blind Sucker River.  Fantastic name!  That's *exactly* the way I felt, not knowing what conditions would be like at the actual site of the ford without walking several miles in from the nearest road.  This photo was taken at a bridge where the Grand Marais Truck Trail crosses it.  The North Country Trail crosses it where it empties into Lake Superior, and there's no bridge there for hikers.

So ... I was here at the bridge in order to assess the flow before deciding whether to attempt the ford.  It's been a very rainy year, and river gauge levels are running at 90th percentile and higher, meaning 90 percent of the time the water is not this high.  What I saw was fairly swift current in water two feet deep or more.  The bottom would be soft sand.  I could ford that.  It's not a safety risk, but one slip in swift current would mean everything I carried would get wet unless I used waterproof bags.

Too much hassle.  It had just finished raining for 12 hours, so water levels would be rising.  With more rain threatening, I didn't want to take the time to do the prep work needed.  So I walked the Grand Marais Truck Trail instead of that 5 mile section of North Country Trail.  It made me sad, and it means that I will not claim to have walked the entire length of the North Country Trail across Michigan's U.P.  Here's the GPS Track of that day.  Too much road walking on a sloppy, muddy dirt road. 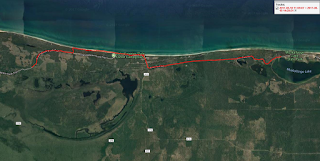 But as you can see from the headline photo and in the photo below, the beach that I did walk was gorgeous, despite the dreary weather. 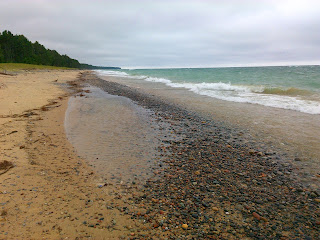 The second day brought me a little sunshine as I came through the quaint tourist town of Grand Marais.  Here the trail follows the shores of a protected bay before hitting some beach west of town. 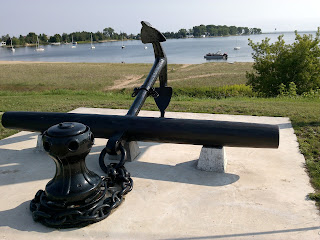 Unfortunately this beach-walk section of trail was essentially closed.  Fresh erosion had dropped a clump of big trees across the route, so I would either have to wade around them out in the lake or bushwhack high up along the edge of the eroded dune.  I chose the latter, and got nice views for my trouble. 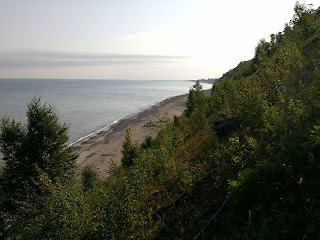 This hike ended at Sable Falls, which marks the beginning of Pictured Rocks National Lakeshore.  Here's Hat number 55 with the falls. 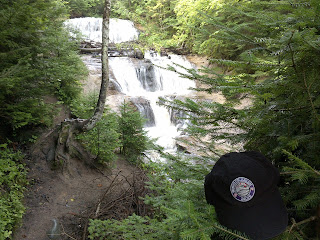 Here's the GPS Track of that day's hiking 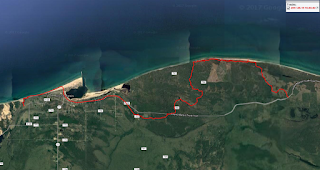 Pictured Rocks is a unit of the U.S. National Park System, and it is arguably the defining segment of the North Country Trail.  I am very much looking forward to being 'spoiled' by the scenery.  You can't overdose on bliss.
Posted by PJ Wetzel at 5:24 PM