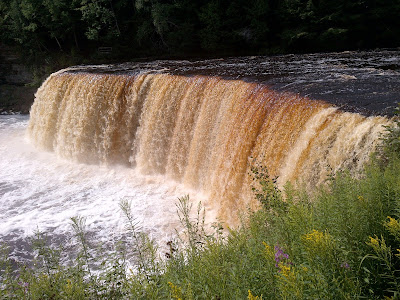 The bit of North Country Trail that goes past the upper falls at Tahquamenon State Park, shown above, may be the most hiked piece of that trail in all of its 4600 miles.  There is a giant parking lot a quarter mile from the falls, which was filled to overflowing on the Sunday afternoon that I arrived, and the only way to view the falls is to walk the North Country Trail.  The flow of walkers on that paved trail was almost as voluminous as the flow of the water.

It has been a wet summer in Upper Michigan.  The river gauge level here was above the 90th percentile, about ten times the normal volume, and the result was a deep rumbling that could be heard half a mile away, and which cranked up to a thunderous cacophony close up.

There is a lower falls about four miles downstream by trail and a lot of people hike that as well.  The lower falls is the kind you could appreciate in a more interactive way. 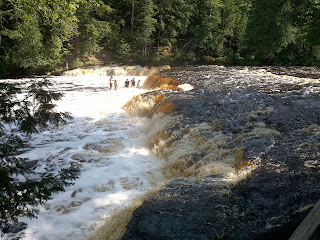 Though I'm not sure whether park regulations allowed it, the river here was full of bathers.  There is another cascade below this, and getting swept over that brink didn't look like something people would enjoy. 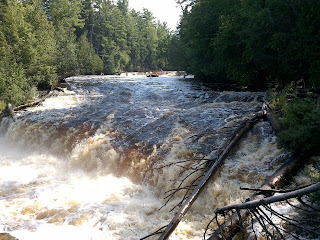 In any case, these points of concentrated interest for non-hikers were far from being the only special sights in the area.  That's where the dedicated hiker gets his/her real reward.  Further downstream you would never know that this was the same river.  This calm morning view shows a river that is about as languid as rivers get. 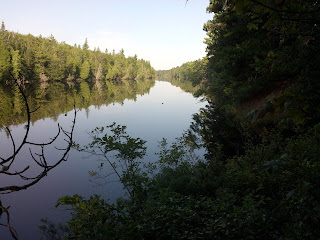 Away from the river there was a sand dune climb with a glimpse of Lake Superior.  It's there, to the left of Hat 49, although it was too bright to show up well in this shot. 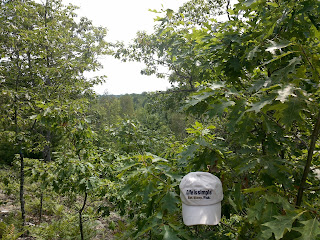 And there was a wetland boardwalk. 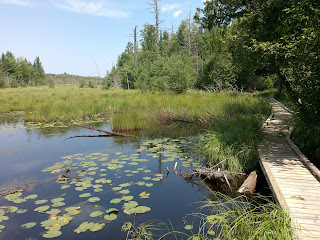 There were giant pines.  The sign said so; and the former Hat 50, now hat 90, was there to confirm it. 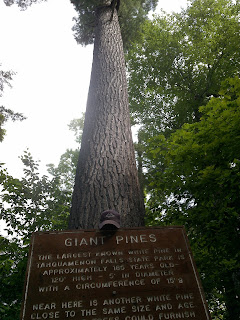 Hat 50 became hat 90 just a few minutes later when I stopped in at the park concession and found a nice new hat on sale for $7.  It was only appropriate that this should become the hat of the day. 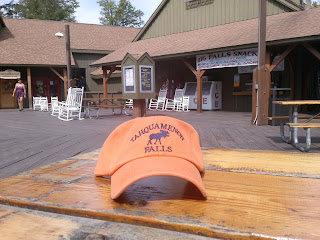 Even farther out there were some very impressive Sphagnum peat moss bogs. 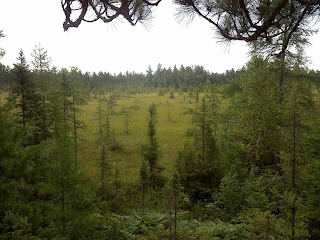 These are actually floating mats of moss that can cover deep water.  The stunted little spruces manage to grow in the floating moss.  Try walking out there and you'll soon realize you're in over your head.  The spongy "ground" sinks under your weight.

One such bog was inhabited by thousands of carnivorous pitcher plants. 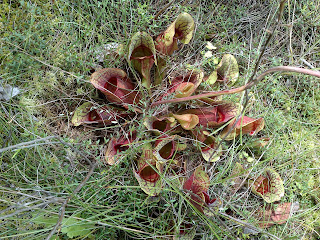 These are a common species, Sarracenia purpurea, which grows from Florida's panhandle to Canada's Northwest Territories.

On the other end of the moisture spectrum, I found these dry, sandy soil loving lichens in 'bloom'. 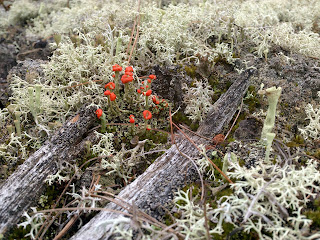 This is the lipstick powderhorn lichen (Cladonia macilenta), and yes, the 'flower' is meant to attract insects.  It indicates the availability of mature spores, and the insects help to propagate them.

An enjoyable section to hike, for sure.  And in the end I was back to the upper falls. 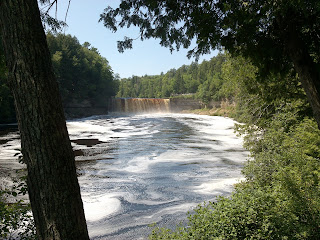 How did that work?  Well, this report covers two days of hiking.  On the first I started at the upper falls parking lot and traveled downstream. 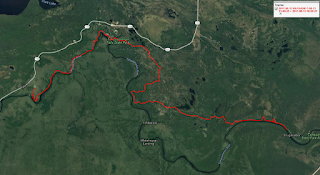 On the other, I started fifteen miles or so to the northwest and rambled through some very remote country (where all the bogs were), ending the day at the upper falls. 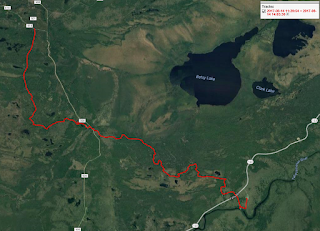 For a more comprehensive look at my hiking, or to zoom in on any individual segment, check the interactive map of my Personal Continuous Footpath on my Wikiloc page.