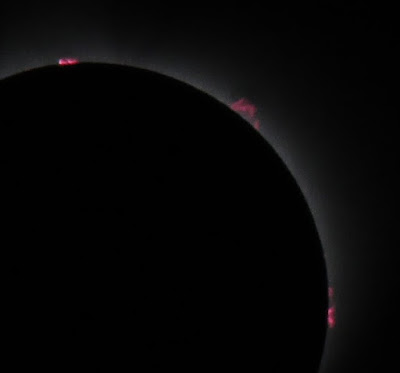 Well, I did; and it was worth it to get to where the sky is crystal clear and those few minutes contained a total solar eclipse.

I left Marquette, in the upper peninsula of Michigan, where I am hiking, at 6AM Sunday morning and got to the place I had chosen, near Powder River, Wyoming, 26 hours later.  That means I had time to stop along the way for a couple hours of sleep as well as rest and gas stops.  One of the rest stops along I-90 in central South Dakota was notable for its 50-foot statue of Sacagawea overlooking the Missouri River. 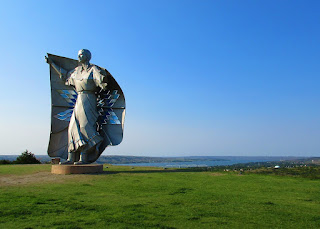 Hat 56 was the hat of the day on Sunday, so when I pulled over to watch the sunset at a badlands overlook, also on I-90, I had it pose. 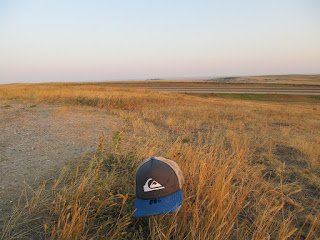 Then I grabbed this shot of the sunset. 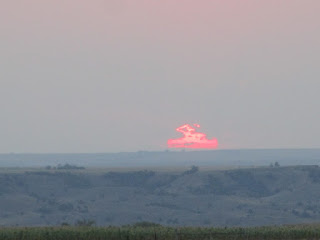 See the ragged clouds partially obscuring the sun?  They turned into a full-blown thunderstorm over the Black Hills, and I was worrying about tomorrow's eclipse viewing.

The place I chose for my eclipse view is near Hell's Half Acre, and there were probably a hundred cars parked at the overlook there as I passed.  Even on gravel Gas Hills Road, which I chose for its flat but high ground with good views of the horizon in all directions, there were a couple dozen cars already set up when I arrived.  I stopped at one concentration of campers and we shared past eclipse experiences and talked about the clouds.  They had seen the storms last night and had been worried too.

There were some clouds rolling in again as we chatted.  Here's Hat 57 posing with the southwestern sky where the clouds were coming from. 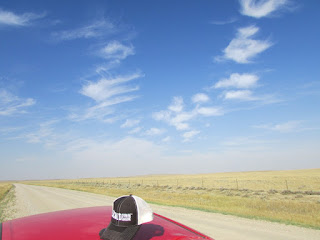 They were moving fast, but there were big gaps between the various globs and streaks and bands, and they seemed thin, so we all thought it was worthwhile to hang in there and take our chances.  I moved down the road a couple miles to where nobody was parked and where I had a superb flat landscape without crude oil collection tanks or power poles obscuring the view. 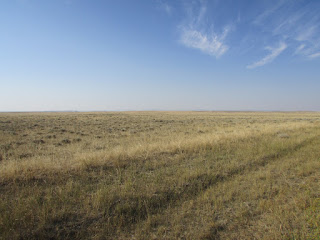 Some of the clouds were in that shot too, adding to the interest but also to the worry.  The distant mountains were almost lost in the haze.  Even there in the high desert there was more haze than I had expected.  I wanted to see how the light played on those mountains as totality arrived, but the haze muddled the view too much. 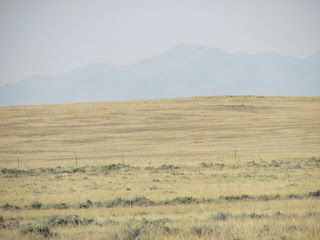 While waiting for the total eclipse I used my reading glasses to project the image of the partial eclipse on a gallon jug of water (something that wouldn't burn was required).  Here's what the images looked like, good enough for me.  It was the total eclipse that I was there for. 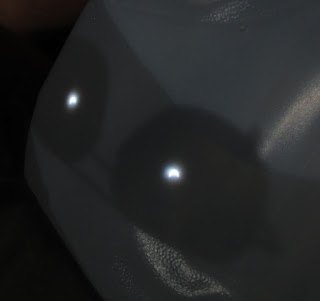 As it arrived, the high clouds actually added to the experience, as the under-sides reflected the sunlit ground beyond. 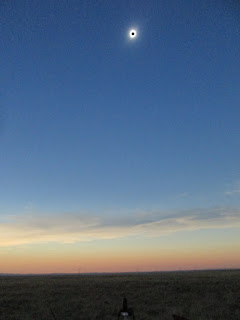 Darkness comes fast in those last moments when the last direct rays of the sun produce the so-called 'diamond ring' effect. 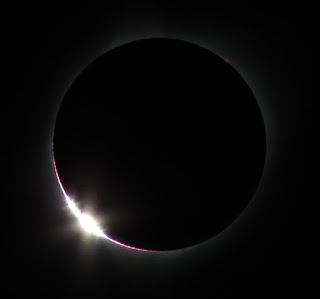 Then I had two minutes of glory before daylight flooded back in. I was careful to divide the time between just being there and being human, experiencing the moment naturally, and being the tech-burdened reporter, operating my cameras, including capturing the shot that stunned me later, shown as the headline photo.   I had no idea that my little $250 Canon PowerShot SX500 IS could get this much detail.  Here's Hat 59 with the set-up I was using. 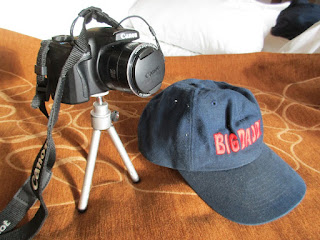 The solar flares are not visible to the naked eye.  The glow of the corona is far too bright.  My camera captured them using the same settings that I used for the 'diamond ring' effect.  With that much 'stopping down' (under-exposure) the corona is too dim to show up, but the pinkish-red flares stand out.

For comparison I've provided a photo taken in Oregon and posted on Flickr by moshen, which is free for me to share as long as I provide that link. 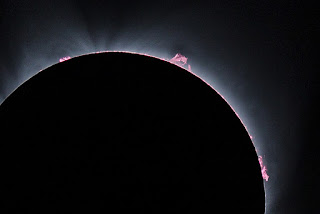 Moshen had his $1400 camera body attached to a $2400 telescope, and got a whole lot more vivid detail for his money.

So even the dreary 29 hour drive back was well worth it (including massive grid-lock on I-25 as the eclipse viewers all seemed to begin heading back to wherever they came from at the same time).  I got back to Marquette at 7:30PM Tuesday, my little red car no worse for the wear. 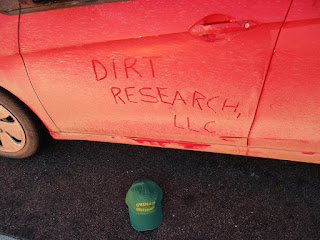 It was here in Michigan, driving the Grand Marais Truck Road after a rain, that the car accumulated the 'USGS certified class-one Lake Superior dirt'.  But it was in the idle hours on the road home from the eclipse that I concocted this variation on the 'Test dirt, do not wash' idea to have Hat 58 pose, pretending that this was a company car of a private research firm that had a creative form of signage.

Okay, well, the eclipse mania is waning now.  Back to hiking.