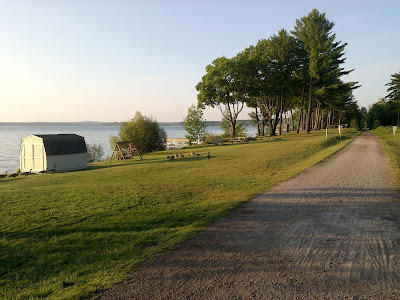 Northern Lower Michigan's trail choices are many.  As I was studying the North Country Trail route out of Petoskey, I noted that it used a rail trail called the North Western State Trail for a few miles.  As with the White Pine Trail, this connection proved to be just the tip of an irresistible iceberg. 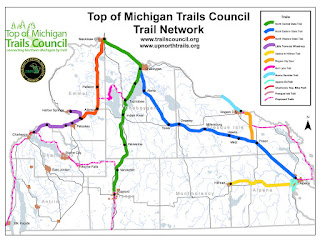 Starting with this cue, I learned about the Top of Michigan Trails Council and their fully connected network of trails.  The one that appealed to me most was the green line--the 62 mile North Central State Trail.  Along its southern half it goes right beside huge Mullett Lake, as shown in the headline photo, and in this morning view from the trail at the town park in Topinabee. 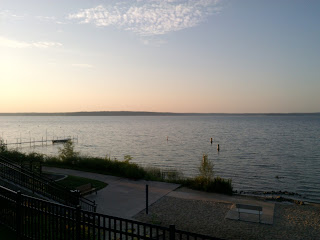 It follows the Sturgeon River along a popular section used by rafters and kayakers. 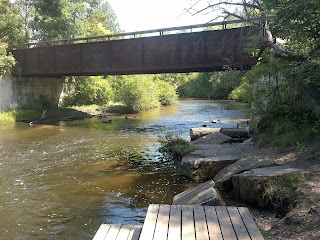 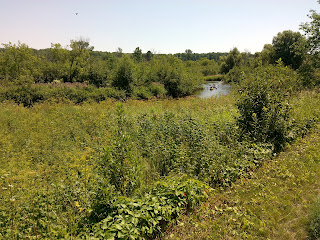 As with the White Pine Trail, it was too good to miss.  So off I went.

Water views included this wetland plain with real hills behind. 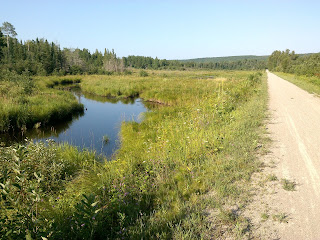 The trail uses mile markers that reflect the old original mileage of the rail line.  Hat 37 photo-bombed this documentary shot.  Again, the hills are in the background. 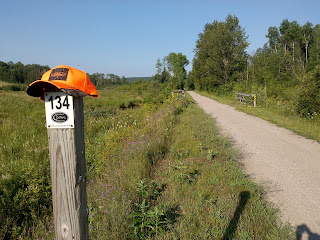 The town of Gaylord, where the North Central Trail begins, is up on those hills.  The trail gradually descends about 700 vertical feet between Gaylord and Mullett Lake.

Non-water views featured aspen trees with their iconic white trunks lit by the summer sun, and a field with a few stunted cherry trees. 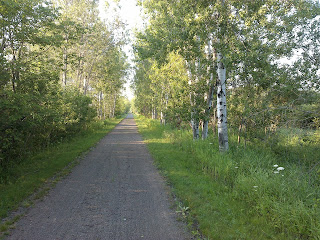 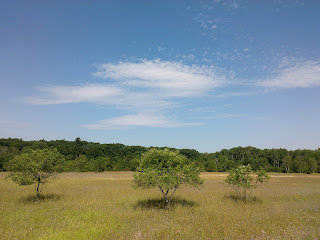 The trail visits the tourist town of Indian River, 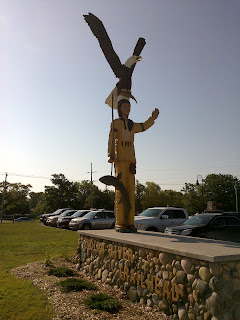 where Hat 38 found a pink pig willing to pose with it. 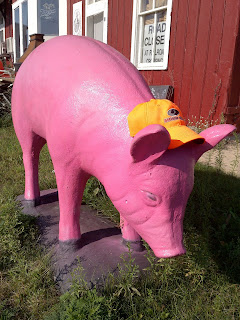 This NCT did not disappoint.  Life is about choices.  I think this was the right one.

Here are the GPS track screen shots of the two days covered in this report. 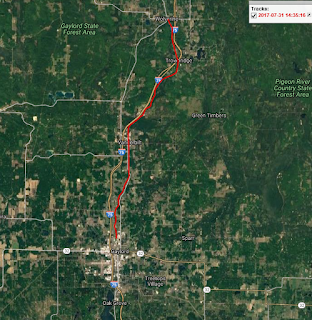 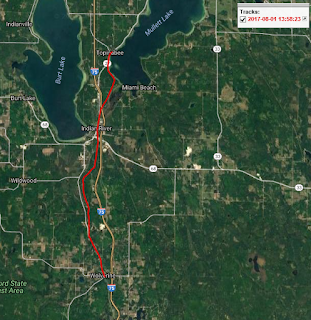 Two more days will get me to the Mackinac Bridge and a leap across to the Upper Peninsula.  There I'll be returning to the 'real' NCT, North Country Trail, and am going to try to stick with it faithfully all the way to Wisconsin.  There are choices up there, but not many.  The North Country Trail rarely comes out of the woods there--very little road walking.  I'm looking forward to it.
Posted by PJ Wetzel at 7:04 PM