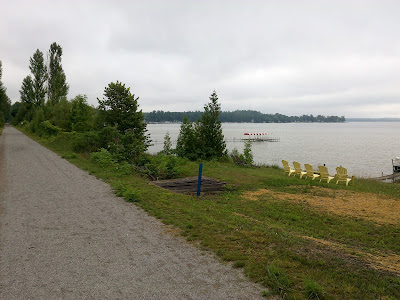 Lower Michigan is a wrap!  In my next report I'll be traversing the land of the 'Yoopers' (U.P.-ers -- the Upper Peninsula).

I finished the North Central State Trail with two more days of hiking.  The second was all alongside Lake Huron.  Here's the best view, taken at the US 23 Roadside Park about halfway between Cheboygan and Mackinaw City. 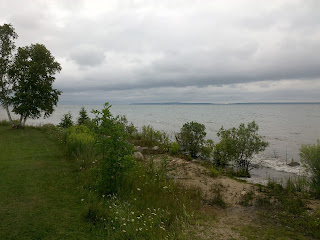 In Mackinaw City I took the obligatory hat photo, hat number 40, with a trail sign at the trailhead parking area.  Hmmmm.  I did the same thing in Cheboygan with Hat 39.  Well, both days were cloudy and dreary.  I guess I wasn't in a creative frame of mind. 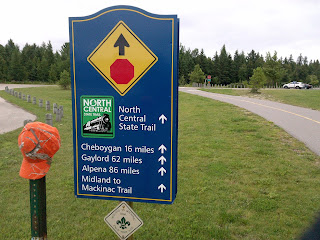 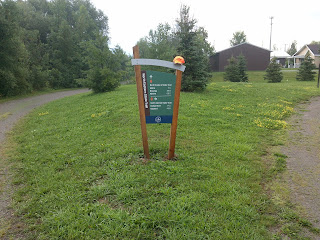 Interesting trivia that I learned.  Mackinaw City is the gateway to Mackinac Island.  Half the city is parking lots for people taking the ferry to the island.  "Mackinac" is pronounced "Mackinaw".  Go figure.  The word is an abbreviation of "Michilimackinac", Ojibwa for "Big Turtle", named for the visual appearance and shape of Mackinac Island.

The Island has been kept free of motorized vehicles almost from the very start of motorized transportation - the late 1800s.  It was the second national park designated by the US Congress in 1875, just three years after Yellowstone, yet it is no longer a national park.  All the federal land was turned over to the state in 1895 and it became a state park.  I didn't know national parks could be decommissioned.  There is only one other one - the vastly famous (or not) Sully's Hill National Park - though there are 24 other abolished units of the national park system (recreation areas, national monuments, etc.).  The entire island is, however, a Registered National Historic Landmark.

Okay, enough trivia.  Back to the subject at hand.  The first of the two days had no better weather but more up-close-and-personal encounters with fine scenery.  For seven miles I was walking beside Mullett Lake,  sometimes separated from it by no more than a bulkhead of big rocks or a sandy beach. Not beach weather, though.  Duck weather.  Temperature in the upper 60's F.

Okay, that's it.  Short report.  Here are the interactive maps of the route.  Zoom in if you wish to see more detail from the point of view of all those stratus clouds.