Hiking my own route again.  I'm leaving the North Country Trail at Alba and hiking east to Gaylord where I'll pick up the North Central State Trail for the rest of Lower Michigan.

To make the connection I hiked a snowmobile trail and then a country road called Sand Hill Road that is little more than a jeep track.


What I saw along the way made the last busy highway walk into Gaylord worthwhile.

Along the snowmobile trail, which parallels a railroad track and busy US 131 I happened upon one of those special moments of convergent elements that a photographer has to be vigilant for. 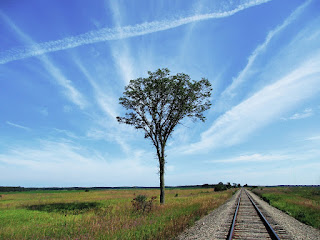 Sky and tree in simple synchrony seems to be one of my favorite subjects.  I have several great examples to brag about, but my favorite was along North Carolina's Mountains-to-Sea Trail at Jones Lake. 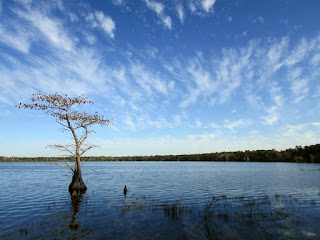 I spotted half a dozen monarch butterflies about a week ago, but failed to get the fast moving buggers to hold still long enough to get a photo.  They're at the northern end of their migration cycle and I worried that I'd missed them, but I got my shots today.  A bunch of them were flitting around, sunning themselves, and feeding. 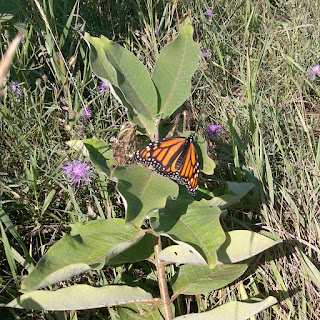 Nature's showy displays sometimes come in miniature form.  Have you ever looked closely at the ubiquitous wild carrot flower--Queen Anne's Lace?  Some of the flowers seem to have a bug stuck right in the middle of the 'doily'.  But it's not a bug.  It's a single dark purple, or sometimes reddish flower. 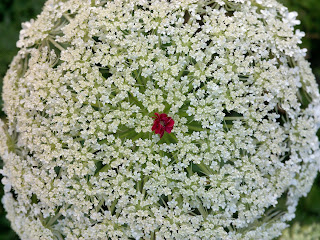 Nobody seems to know why it's there.  It isn't fertile.  The best suggestion I've seen is that it is a vestige, like the human appendix.  Once upon a time it may have been the prominent flower on some ancestor plant, but over time it was superseded by the constellation of small white blossoms.  The above example seems to be more of a throw-back to that ancestor plant than most.

Let's see ... what else?  Well, there was a caterpillar as showy as a monarch on the shoulder of M-32 on the way into Gaylord. 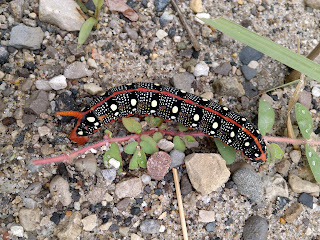 And I had Smokey Bear model my hat of the day.  Guess what number. 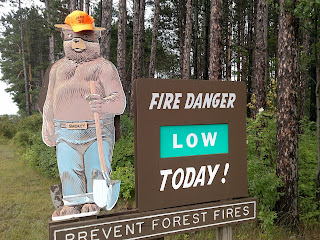 Even in Gaylord's suburbs, this giant new Meijer store made a nice counterpoint to a field of mid-summer bloom.  Unfortunately the lavender cloud of flowers is made up of a serious invasive species, the 'spotted knapweed' Centauria stoebe, a native of eastern Europe.  Does that diminish the beauty of the scene?  It depends entirely on one's personal perspective ... on what you define as 'beauty'. 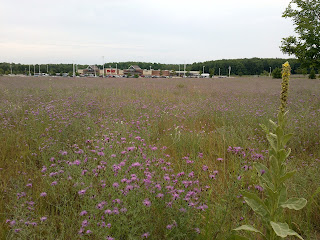 I approached this road walk section with no expectations.  Sometimes that's when the best things happen.

Here are the GPS tracks of the two days cover in this post.  In the first I've circled an area where some copycat tree art has been planted, much more recently than the "150" I posted in my last report. 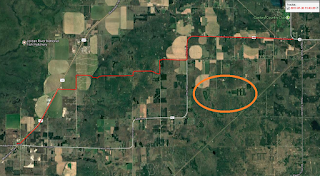 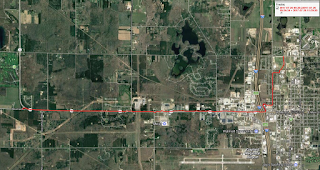 Zooming in, here's a closer look at the sky-art. 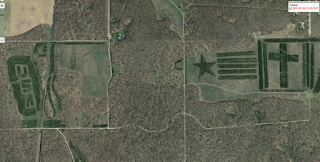 You can check it yourself by zooming in on the interactive map below, courtesy of Wikiloc.