From my personal journal:

I headed out for the long drive to Katahdin Iron Works. I was at the gate at 6:45 and found that the gate was closed from 9PM to 6AM, so I wasn’t terribly late. I checked in with the nice lady at the toll station and paid the $10 fee to drive in and park at the Gulf Hagas trailhead, which is also the AT trailhead (there are many trails in this area). And I must report that the area is anything but a ‘wilderness’.

The AT mystique of a 100 mile wilderness is pure hype, or at least a skewed viewpoint limited to thru-hikers. The Gulf Hagas parking area was bustling with day hikers today, and there are loop trails that offer several fine day hikes that include parts of the AT. I even passed a family with a young girl of 9 or 10 , all dressed in casual street clothes and hiking in flip-flops - I met them twice, so I know the loop they hiked - eight miles! This is so far removed from my preconceptions of this section of trail that it might as well be hiking in Central Park, NYC.

I came to the AT seeking ‘fellowship with the wilderness’ as the three 1934 bronze plaques down in Georgia promise. If there is anywhere on the AT that civilization should not yet have encroached and turned every significant stopping point (summits and shelters in particular) into yammering people-infested 'town squares', you’d think it would be here in the final hundred miles of trail in Maine. Fail. At least not on the week before Labor Day.

I found myself longing for those chilly January days down in SW Virginia where I would hike for days without seeing another person on the trail. No, “fellowship with the wilderness” is not to be especially found in the only section of the trail given the informal title of ‘wilderness’, and that leaves me deeply disappointed today.

Okay … so it was an ordinary summer day anywhere on the AT. Fine. I got over it.

The section I hiked started with a short walk along the West Branch of the Pleasant River, then begins the very civilized climb up toward Chairback Mountain. It’s civilized (good footing, steady slopes) only until you reach the foot of the cliffs below the summit. There the trail gives you a little taste of Mahoosuc Notch (huge boulders with no obvious way through) followed by a little taste of Beaver Brook trail (steep scrambling on big gnarly rocks), followed by a long steep section where extensive stone step work has been done (reminiscent of St. John’s Ledges). In all, it was a notable little climb because of the severe steepness and the memories it evoked. I had been warned of this scramble by Ridge Runner Audrey: Maine native who sought the city life in Chicago and then came back to her roots.

Up on the summit ledge of Chairback, the trail gives you views across the Gulf Hagas area (apparently the 'grand canyon of Maine' itself is hidden by a low ridge flanking the mountain) toward Whitecap Mountain, and with another glimpse of Katahdin. But the views seemed mundane – nothing but wooded mountain slopes across a wide valley.

Coming off Chairback Mountain (continuing southbound) the trail drops into a narrow gap or ‘notch’ and then climbs straight up a horribly eroded wall of a trail to where the Chairback Gap Lean-To sits. Down in the ravine the trail has been relocated to avoid a bog. The signs on the south side of the bog seem to direct the hiker up a false side trail to the shelter, when in fact there is no side trail at all—The AT literally passes under the overhanging roof of the Lean-To.

Beyond the shelter the ascent continues and the trail remains fairly difficult as it reaches the summit of Columbus Mountain. The reward for reaching this high-point is a very limited viewpoint from some rocks. The actual summit has no views.

The best views of the day, in my opinion, came from the exposed bedrock slabs on top of Third Mountain. Here there is a fine view of the sprawling Long Pond. 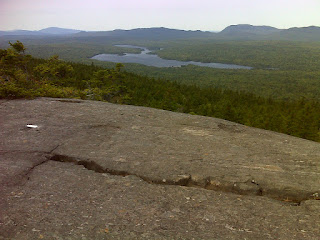 Between Columbus and Third Mountains the sag crosses the outlet stream of West Chairback Pond. There’s a side trail leading 0.2 miles to the pond, but I didn’t have time to hike it. I reached my turn-around point at the Third Mountain side trail after 5½ hours of pretty strenuous hiking, and just wanted to return ‘home’. But on the way back, I had to take some time and linger again on top of Third Mountain and enjoy the views again. Even Chairback’s views gave me reason to slow down. But otherwise I trooped along and made it back to the parking area in 4½ hours: a civilized ten hour hiking day in a civilized and popular hiking area.

Here's a map of today's civilized hike and a link to the civilized photos:


AT Day 219 - Chairback Mountain at EveryTrail
EveryTrail - Find the best Hiking in Maine
Posted by PJ Wetzel at 11:45 AM