Can you identify this guy?  I mean what kind of snake it is?  Well, I met him on the trail today.  He was pretty much stalled, headed northbound, obviously not in much of a hurry.

Yesterday (though I forgot to mention it at the time), I met a more personable trail companion - because he was a person!  After only two days of hiking in middle Virginia I made my first connection with someone I had met up north.  I expect to be hiking north through the SoBo bubble as days progress - only a few have made it this far south this early, so I was very surprised when this hiker looked up from where he was seated snacking and talking on his phone and said "I saw you in Maine."

I honestly didn't recognize him.  "How could you get here from Maine so quickly?" I asked.

Turns out he was doing a Flip-Flop.  'Bobcat' hiked north from Harpers Ferry to Katahdin, summiting on Sept. 3rd.  Then he took a couple weeks off and was now making his way south from Harpers Ferry.  He said we met near Andover.  I vaguely remember the horn-rimmed glasses, but he said we didn't talk much back then ... even though he knew who I was from trail talk with other hikers.  Apparently word about me (and my description) had spread up and down the trail much more than I realized.

Anyhow, today Bobcat and I had a nice long conversation.  He's from Baltimore and, like me, has hiked a big chunk of the middle of the AT in previous years, so was covering familiar ground.  We both agreed about the luxury of these easy trail conditions after leaping from Maine.  And Bobcat noted that we both have about the same distance left to hike: about 700 miles.  It was nice to be able to share so many common experiences - and then off he went south and I north, sadly never to meet again.

Now ... back to today's hike.  I expected rain late in the day, so planned my hiking so I would be able to stop early if necessary.  I hiked a leg south from Bearwallow Gap to Cove Mountain Shelter and back and then moved to the nice parking area down at Jennings Creek and hiked back up to the same shelter and back.

It was a foggy day after some pre-dawn showers.  The fog broke enough in the early afternoon that I could get this half-decent view from the only opportunity for a view that the trail presented all day - from this rock outcrop a quarter mile north of Cove Mountain Shelter.  There's even some premature fall color evident in the woods - more because of drought than because of the change of seasons.


Otherwise it was walking in the foggy woods, or in what was left of woods after a major fire swept part of the ridge just a few years ago.


And just as I expected (for a change), the rain started as I was returning to the Jennings Creek parking area, so I did not hike the section north from there that I might have.  Just as well - after two 20+ mile hikes, my body was telling me I was overdoing.  An easy day today was not a bad thing.  There's likely to be another easy day tomorrow - even a zero - with a huge storm system pushing in that isn't forecast to clear the area until late tomorrow.  I'll keep you posted. 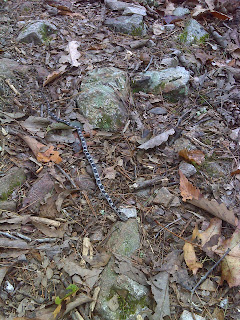 It's a baby black snake!  Yeah, who'd-a-thunk?  Seems they hatch out in late summer and early fall sporting this bright pattern, which disappears after they shed their skin a couple times. It took me a lot of internet searching to finally get the ID.

Here's the map showing today's hike.  The title line provides a link to the eleven photos I took that I thought worth sharing today.  They can be viewed as a slide show or individually.

AT Day 232 - Cove Mountain at EveryTrail
EveryTrail - Find the best Hiking in West Virginia
Posted by PJ Wetzel at 5:32 PM