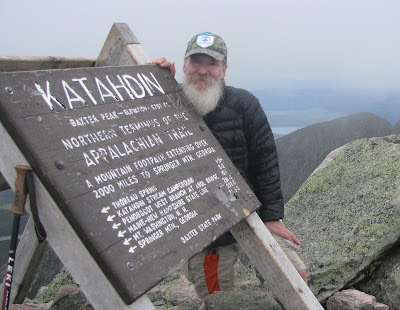 This was Katahdin summit day.  It was a tough day ... tougher than I had expected.  The weather was providing clear evidence of the change of seasons.  But it was a great day.  Here's my personal journal description:

I headed back to Katahdin Stream Campground, finished preparing and was on this final day hike (Day 229) of the northern leg of my adventure at 7:20AM. Only the lowest couple of miles of trail up to Katahdin are fairly easy – gentle slopes then some well-constructed rock step work after you pass the beautiful Katahdin Stream Falls. 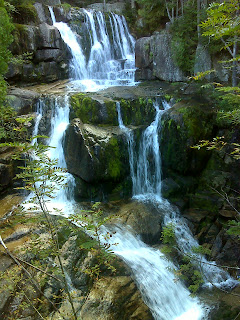 Then the rock scrambling begins. I have to describe today’s activity as a ‘climb’, not a hike. It was very physically demanding. First there were scrambles through boulders in the woods, some of which rivaled Mahoosuc Notch, then the exposed climb through ‘The Boulders’ with the aid of 4 or 5 strategically located metal hand/foot holds.

Above The Boulders, Hunt Spur levels out for a bit but you can see the steep ridge of exposed rock awaiting you as you climb. It just keeps getting steeper and more exposed. By the time I got to The Gateway (the beginning of the Katahdin ‘Tableland’), I felt as though I had been through a super-tough weight-lifting workout. Muscles I don’t use had been pushed to their limits. Not having expected such an extended workout, I probably plunged into it too intensely, rather than pacing myself.

The weather was marginal, with clouds on the mountain almost all day. But as I climbed, the cloud base seemed to rise with me. There were even a few brief appearances of the sun, so although when I got to the Tableland there was a lot of fog, I also managed to see nearly all the views that Katahdin has to offer.  Here's a look toward the SE at the lakes around Millinocket with some of the tundra's fall color in evidence:


That traverse across the Tableland is all easy hiking and would have been a perfect delight on a sunny warm summer day, but today was pretty chilly. Yet I still really enjoyed the tundra, as I always do.  Thoreau Spring is such an unexpected sight!  And for some reason they seem to make the trail walk *through* it rather than past it. 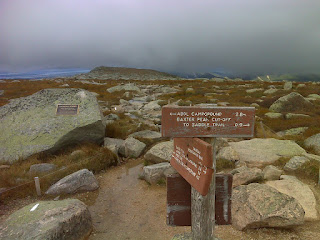 As I said, cloud base kept rising, so I got views of the summit as I approached it, and views from the summit too. There were a handful of people at the summit including thru-hikers ‘Secrets’ and ‘Shenanigans’, who had passed me on the way up. I had met ‘Secrets’ yesterday at Daicey Pond as well. They had seen my entries in shelter log books, and wanted to take my photo. Needless to say, I got my obligatory mug shot with the summit sign.

Some people were having lunch at the summit, but it was a little too blustery and chilly (probably around 40F) for me, so I headed back down pretty quickly. I took my time on the descent. By then the wind had really picked up, so I felt buffeted around on the tough, steep, very exposed rock scrambles on the upper part of Hunt Spur—just adding to the difficulty. But descending was not such a grueling workout, just a serious rock scrambling challenge.

I think I was at the summit during the best weather today had to offer, because it was getting more cloudy as I came down, and then we got some showers – enough to wet the rocks. But I had reached the woods and the less difficult parts of the trail by that time—thank goodness! I was back at the campground registration box at 3:55.

Today was a milestone day, of course.  It marks the day I completed hiking the entire Appalachian Trail, though not all of it this year.  My 2012 quest still goes on.  I want to hike the entire trail both north and south in this calendar year.  So in this respect Katahdin is just a waypoint along the journey.  I still need to hike 354.2 miles of trail (both ways) between Daleville, VA and Caledonia State Park, PA.  I want to start that ASAP.  I'll be taking a few travel days and a few days off to visit family, but then it's back to the trail.

Here's the map of today's climb and a link to all the photos worth printing:

AT Day 229 - Katahdin at EveryTrail
EveryTrail - Find the best Hiking in Maine
Posted by PJ Wetzel at 6:44 AM