There was no rain in the forecast today.  Zero percent chance.  It was a hot and humid morning, and  by afternoon the hikers I was passing were wishing for some relief.  I was agreeing with them.  Be careful what you wish for!  About 3PM a little dark cloud formed overhead - there was blue sky off to the north.  When it began to rain I was happy to see it - I expected a little cooling relief.  I guessed that it would probably end before it did much good.

Three hours later ... well ... I had my cooling relief.  I was, in fact, close to hypothermia.  It had hailed.  It had rained as hard as rain can fall - for three straight hours.  I had been nearly struck by lightning three times.  Four to six inches of rain had fallen, and the trail had become a morass of rivers and lakes.  That spot shown up top had been a dry wash when I came through earlier.  I had noted it because of the erosion and the jumble of rocks - very difficult footing.  Now I could see how it got that way.  I had to climb that cascade, because that's where the white blazes took me. 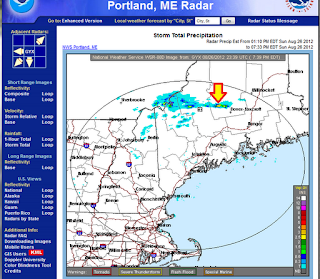 The Portland Radar estimated rainfall for today tells the tale.  That little yellow and gold bulls-eye marked by the yellow and red arrow is where I was hiking.  The forecast of zero rain was actually a pretty good one for 90% of the area.  The area just to the north of where I hiked got nothing.  That's where the sky remained blue - that's blue sky showing through the pouring rain in the photo up top.  Amazingly I could see that blue sky much of the time, even during the heaviest rain and hail.  But the 'little black cloud' over me just didn't move for three hours.

When the rain finally did end, the weather returned to warm and sultry, sunny and calm.  Thank goodness ... I warmed up quickly despite being soaked through and through.

So the 'monsoon of Monson' was the big headline today.  I was parked at the big trailhead parking lot on ME highway 15 3.5 miles north of town - the traditional jumping off point into the 100 mile wilderness for Nobo thru-hikers.  But first I headed south for a five mile leg in the morning before doing a second five mile leg north in the afternoon.

Beside the heat and the rain, the headlines of the day were two:  First was a return to difficult trail.  Actually most of today's hiking was not that tough, though there were more ups and downs of between 100 and 600 feet.  But in the vicinity of Leeman Brook Lean-To, which is listed as located in a 'slate ravine', the rock scrambling got serious - hands needed to get up and down both sides of the ravine, and a bit of a tough stream crossing at the bottom, right beneath the shelter, made even more tough on the way back when the water flow had increased ten-fold.

Yes, on my return leg, after hiking for three hours in the monsoon, when I got back to the shelter ... the rain stopped.  Of course it did.  It's some sort of perverse extension of Murphy's Law. 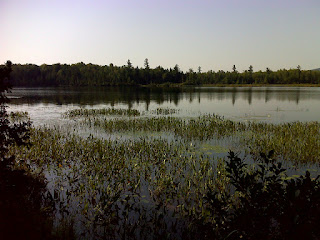 The other headline for today was 'ponds'.  They were the featured elements today.  The trail seemed to be going out of its way to take you past every one, especially north of Highway 15.  South of there, the trail passes Hebron Lake (shown at left.  Okay, it's not called a 'pond', but the end of it that you could see from the trail was no bigger than a pond).  Also south of the highway you had the option of taking a short side trail to Doughty Ponds.  There's a new 'emergency reroute' due to beaver pond activity that's flooded the trail near Doughty Ponds.  But neither the original trail nor the reroute actually give you a look at that pair of ponds.

It was a different story south of the highway.  First you pass Spectacle Pond: 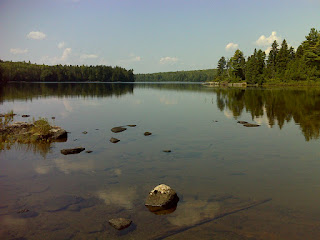 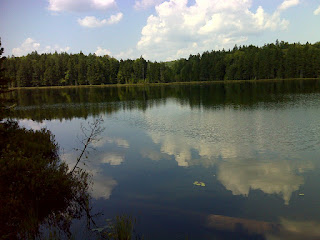 Next the trail drops down a few hundred feet to pass Lily Pond: 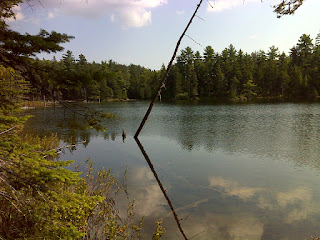 Then it climbs back up and passes the incredibly picturesque North Pond.  The headline shot above is taken from the same spot.  Below you can see the 'little black cloud' beginning to form in the upper left: Then finally I turned around at Mud Pond.  Obviously it had begun to rain by then: 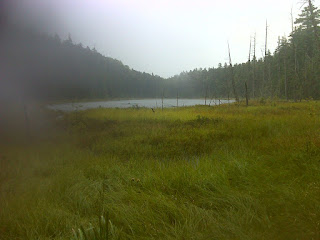 So it was a day that I won't soon forget.  The only serious casualty seems to be my cell phone.  I carry it in a zip-lock bag, but I hadn't replaced that bag in a while and I guess it had developed a few little pinholes from routine wear and tear.  With four to six inches of rain, that was enough to get the phone wet.  Now all my phone does when I try to turn it on is obnoxiously demand that I use a "genuine battery" and that I immediately power down until I get one.  It's probably a lost cause, but all the rest of the lingering effects of today are just the memories - they'll make great subjects for future fireside tales.

Below is a map of today's hike with a link to more photos including a shot of a curious owl and another shot of the monsoon:

AT Day 216 - Monson area at EveryTrail
EveryTrail - Find the best Hiking in Maine
Posted by PJ Wetzel at 1:34 AM