Another wonderful day in central Virginia.  This time of year in this part of the country is just magical.  And to top it all off, after my 20 mile hike, I had a totally unexpected surprise.  Here's my personal journal account:

I got up at first light, dressed and headed to the James River parking area. On the way I stopped to take a photo of the sea of fog below, with top at about 1400 feet elevation and island mountains sticking up – pretty view.

The drive took most of half an hour so it was 8:15AM before I was on the trail. I crossed the James River Foot Bridge (*not* 'Footbridge' - no, no, no - you see, it's named after William Foot, so it's the Foot Bridge, or the Foot footbridge, if you will) and headed on southbound along the river then up Matt’s Creek to the shelter. There the trail begins a steady side-hill climb to a ridge, follows the ridge, and then goes side-hill again, crossing Big Cove Branch and then climbing via switchbacks to the junction with the Sulphur Springs Trail at 2600 feet elevation. 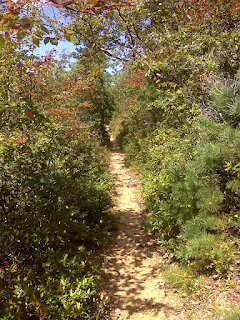 From there the trail remains mostly level, except for one rocky and eroded section where it drops 150 feet then regaining that elevation gradually, losing it again, and regaining it again, all very gradually as it meanders through some early fall color in the James River Face Wilderness to the Marble Springs campsite, site of a former shelter. I tried to learn the reason this shelter no longer exists via a quick internet search, but couldn’t find any information.

To this point, all of the trail I hiked was very smooth and easy. Then came the climb to and descent from Highcock Knob. The trail in the upper part of this peak is pretty steep and rocky and uncomfortable, with one surprise climb to a secondary knob where the only viewpoint exists but offers a pretty limited and uninteresting view. On the south side of Highcock Knob I turned around at Petite’s Gap at 1:25PM and headed back, enjoying limited views of the James River from the ridge. 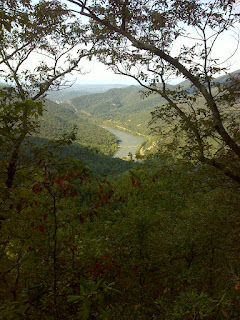 Weather was getting hot but it was a very pretty sunny day. On the way back I began to meet some hikers, all of whom appeared to be (and two said they were) thru-hikers. There were five in all, a much higher count than any previous day since I got to Virginia.

For a while my left ankle was complaining – must have slightly turned it, but fortunately as I walked on that complaint faded away and I was left with just the usual aches and pains from a long day of hiking.

It was 6:15 when I got back to the parking lot. I was changing when a park ranger pulled up in his SUV and told me that two guys who I knew were looking for me.  Two guys I knew?  Yep, they were camped up Hercules Road (side road nearby that the AT crosses). He said one was named Harry. Was the other Leo? I asked, and the answer was yes. I could hardly believe it. I dropped everything and drove out to look for them, eventually finding them in a pull-off not at any AT crossing.

What a shock to see these two guys again when I had assumed they were still making their way south from Maine since I last saw them on August 5th. But it turns out that they had been doing many more bits and pieces than I realized, and were going to complete the entire AT tomorrow at Lynchburg Reservoir. They had started on February 23rd, and had only spent a handful of nights on the trail. The rest of the time they were doing very much what I am doing, usually sleeping in their vehicles and doing day hikes, except they were only hiking one way between their two vehicles.

What a coincidence that I ran into them again for the third time (First time was March 18th way down south near the N.O.C. in North Carolina, and we crossed paths on several subsequent days down there as we were both headed southbound) – it truly defies the odds. After tomorrow they would be finished and off the trail.

We had a very long enjoyable conversation, comparing notes, talking about people we had both met, etc., exchanged contact information and promised to keep in touch. It was dusk before I finally said a reluctant good-bye to these two (by now) old friends and headed out.

Here's the map of today's hiking route, and a link to many more photos: