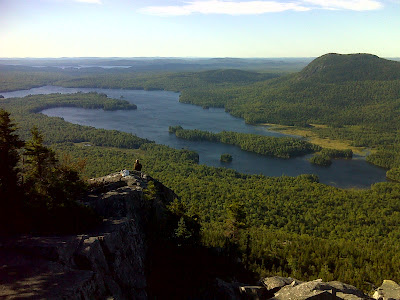 I expected the views from the Barren Ledges to be great today.  They were better than that.  For the rest of the story, I'm relying on my personal journal:

I was on the trail at 7AM. I took the right fork where the access trail forked and found that it came out just 250 feet or so up the trail from the other fork. I hiked on north ascending fairly steeply over fairly rough trail to the Barren Ledges where the views off to the south and east over Lake Onawa were super spectacular this morning because of the high visibility. That's the view up top.

It was also fairly windy and chilly – windy enough in exposed areas that I had to hold my cap down, and cold enough that I had to put on a long sleeve shirt. I hiked on along easy trail for most of a mile then made the climb to Barren Mountain summit, sometimes a bit difficult. The summit has a skeleton of an old fire tower, but not worth climbing since all the views were basically available from the ground.

On I went down the other side, though this was nearly level trail with no significant descent. I took the 0.4 mile side trail to Cloud Pond Lean-To. The shelter does not have a view of the pond but the access trail goes right by it and there are tenting areas beside it also. 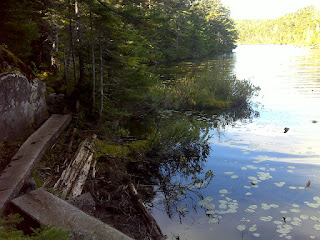 From there I hiked on for a mile or so at high elevation (2500 feet) and then made a steep drop, with a short section of tough trail reminiscent of the Whites, getting easier near the bottom where the trail crosses a wide saddle to Fourth Mountain and crosses Fourth Mountain Bog on a bunch of bog bridges, mostly single logs. It’s a pretty bog with lots of pitcher plants that were flaming red, I think that’s a fall color change.

The ascent of Fourth Mountain is steep and somewhat tough also. There is a limited view to the north and west from the summit, and there was a good glimpse of Katahdin from there (it was hidden behind another mountain at Barren Mountain). 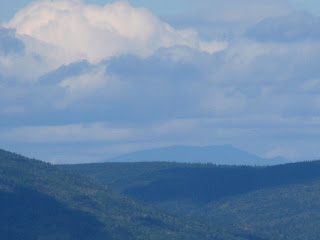 I continued down the north side of Fourth Mountain, another steep fairly difficult short piece of trail, then crossed a rough wide saddle with ups and downs and an area of open bedrock ledges with views back to Fourth Mountain. Finally I turned around at the Third Mountain side trail, which forms a nice day hike loop with the section of AT that continues on north. But I turned around and headed back south. The wind had continued all day but the temperature moderated enough under the warming sunshine that it had become a very comfortable day for hiking.

AT Day 218 - Barren Mountain at EveryTrail
EveryTrail - Find the best Hiking in Maine
Posted by PJ Wetzel at 11:05 AM