Which of these views would you rather camp beside - Billy's View ... 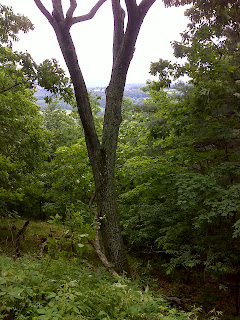 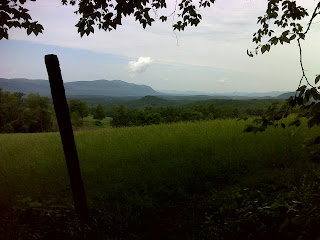 Both occupy just four miles of trail, which is all I hiked today after spending my very first night, of 137 trail hiking nights this year, in a motel.  (Ahhhh, it's nice to feel clean again). 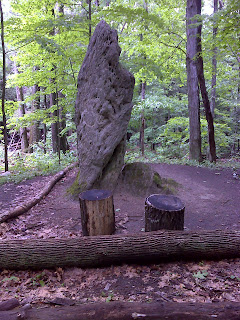 Or perhaps you'd rather risk camping in the 'vortex' surrounding the Giant's Thumb, which just happens to be between Billy's and Rand's domains. 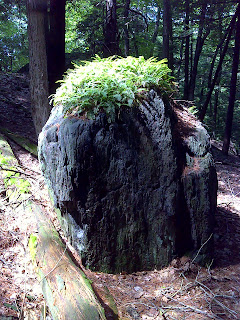 The Giant, whose thumb it is, may be this guy, sporting a fine head of hair. 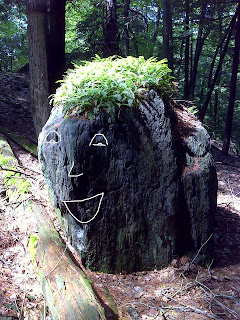 If your imagination needs some help, below is my interpretation of the Giant's face.

The trail between Undermountain Road and Limestone Spring Shelter features all of the above as well as a tough climb from US 44 and another tough one on the half mile blue blazed side trail to the shelter.  But the latter was for a good cause.  It takes you within digit-dipping distance of a cascading stream, whose cascades culminate in this free-fall of a dozen feet.  It didn't hurt that we had 2 inches or rain last night.

I met 'Wisconsin' again today twice, on the way out I passed him slogging along, hoping to get to Riga Shelter.  On the way back he had curled up in his sleeping bag right on the trail just a half mile shy of US 44.  He could not go farther.  He was feverish and said that every joint in his body ached.  He had called his father who was on his way down from Dalton, MA.  I worried about 'Wisconsin' all evening, as it rained heavily again starting about 5PM and lasting until late evening (it was about 3PM when I passed him).  Hope his Dad made it to Salisbury in time.  Hope he's Okay.  *** update on 'Wisconsin' - five days later he passed me on the trail - perky and chipper as could be.  Turns out it was Lyme Disease - some people can get such severe symptoms in as little as 72 hours after being bitten.   The prescribed Doxycycline had him feeling fine in no time.  He's once again headed for Maine.  Good luck ... or as the college fight song of my Dad's Alma-mater goes:

***************************
As an afterthought, I found two more photos I wanted to share:  First is the great vertical-drop waterfall that you pass on the steep side-trail to Limestone Spring Shelter.  It's a long trip down to this shelter, but worthwhile, though I had to bushwhack a short steep slope to get to this viewpoint, and the recent heavy rains surely helped make this a better shot.

The other shot is of some very resourceful fungi that collect and store rain water. Here's the glitchy GPS track for today's hike.  I have no idea why my GPS 'phased out' for a while and missed about a mile of trail on my way outbound.  Fortunately the track is true on the way back.  The title is a link to more photos.

AT Day 137 - Rand's View at EveryTrail
EveryTrail - Find the best Hiking in Connecticut
Posted by PJ Wetzel at 6:26 PM