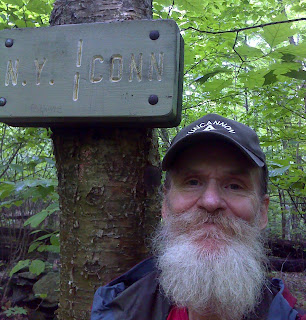 Connecticut has place names like the Housatonic River and Schaghticoke Mountain, both sites I visited today, along with more manageably named places like Bulls Bridge and Tenmile River. Bureaucrats gnawed the guts out of the middle of my day - four hours on the phone. But when I was back in the bosom of Mother Nature, it was all good. Here's the story as told to my personal journal: 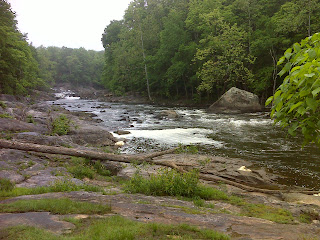 There was a small shoulder area to park at the intersection of Bulls Bridge and Schaghticoke Roads right where the AT comes out of the woods and begins a road walk up Schaghticoke Road, so I parked there and was on the trail about 7:30. I hiked south along the river, very surprised to find it to be a roaring cataract rather than a lazy silent drifting river as I had pictured from Ives’ symphonic rendition ‘The Housatonic at Stockbridge’. Apparently it is a quiet river up there. Here it’s a raging torrent so a great accompaniment to the walk. 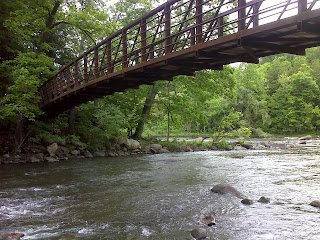 The iron footbridge over Tenmile River is an engineering marvel to my eye. Immediately south of it is a tenting area, then the trail turns and follows the Tenmile River up past the Shelter, which I bypassed on the way out since it was so early that the overnighters would still be there. 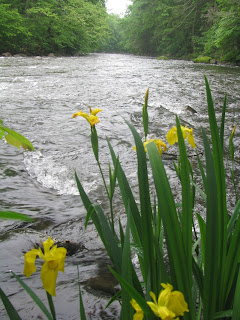 Upstream, just before the AT leaves the river to climb Tenmile Hill there was a spot where wild yellow iris plants were growing right at the downstream point of an island separated from the mainland only by a small channel with rounded stepping stones. I opted to head there to get the photo of those iris plants and lost my footing on the smooth slippery rocks and fell backwards into shallow water getting my backpack soaked but remaining otherwise dry.

It was worth it to get the photo, but I felt humiliated – my balance is just really bad. The backpack wassoaked and some of my jacket was splashed, and things would not dry in the foggy weather, so I was a bit wet for the rest of this leg, though not cold – temperature in the low 60’s.

On the way back along the Housatonic a man in dress pants and black patent leather shoes and a white business shirt came by carrying nothing but a hand-free ear-plug phone.

He stopped me and asked “How far?”

So I had to explain to him that it went all the way to Georgia ... if he chose to go to the end ... which amazed him. But I suggested that the footbridge over Tenmile River would be a good destination for a pleasant walk. I was back at my parking spot a bit after 10AM and spread out the few things in my backpack that needed to dry out. Then the bureaucrats took over my life ...

Finally at 2:30 I got back out to hike a short leg south. Just as I was ready to go, a car with Maryland plates came by and turned around at the intersection and stopped. Out popped ‘Salty’. He hadn’t told me before, but he’s taking two zero days. It was his wife driving the car, and it turns out they live on Kent Island – eastern shore. We chatted for a minute or two and noted that we’d probably meet on the trail again. Once back on the trail, he’ll pass me as he roars on north. He then went off for some R and R with his wife (he had hiked into Kent this morning to meet her) and I headed out on my hike.

It began with the quarter mile road walk down Schaghticoke Road, then the trail enters a pretty woods with gigantic boulders strewn about and begins to climb Schaghticoke Mountain. There are some steps, some mud, a few rocky bits, but mostly it's an easy, smooth climb.  On top there’s a vista point looking south (all fogged in) then one to the west (beginning to clear). Then after a mile of mostly level walking on easy trail I came to the NY-CT border point where the AT northbound leaves NY for the last time. 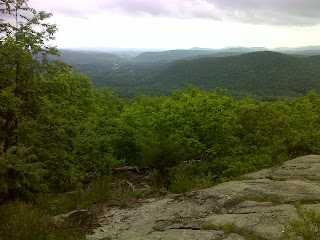 I turned around there and headed back, finding that the fog had lifted so that I got a great look at the Housatonic River valley from the vista point at the summit looking South. 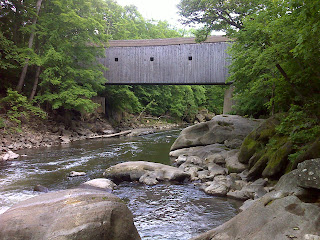 I was back at my parking spot at 5:30 and deposited my backpack and then walked down the road to the covered bridge where there are also side trails to the roaring river – a nice short side trip that I’d recommend for AT hikers. 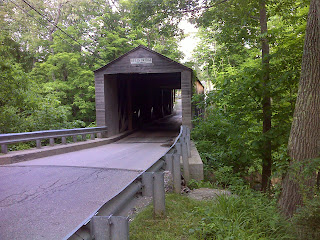 The bureaucrat maggots may have eaten the guts out of the day, but it went perfectly fine without guts, thank you very much :-)

Here's a map of today's hike.  The title is a link that will take you to all the photos of note along the way:

AT Day 132 - The Housatonic at Bulls Bridge at EveryTrail
EveryTrail - Find the best Hiking near Waterbury, Connecticut
Posted by PJ Wetzel at 4:06 AM