P is for Peak-bagging 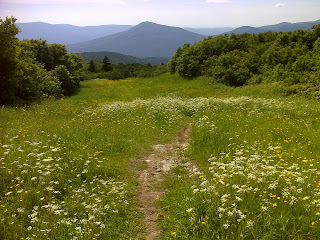 Me? ... nahhh.  I wanted to bag a 20,000' peak - didn't much care which one - and that was about it.  Now I'm just bagging miles - extending what I call my 'Personal Continuous Footpath'.  Then there are my friends the Troverts (X and N), who have bagged all 397 units of the US National Park System (including some really remote ones up in Alaska) and are currently thru-hiking the Appalachian Trail (they're somewhere near Harper's Ferry as I write this).  Whatever the list, it seems to be a common thread among travelers and adventurers - defining goals, checking them off, moving on to the next one.  It provides motivation and focus.

For me, as I said, the 10.1 miles of AT were more significant than the three peaks.  I surpassed the 2600 mile mark today - 59.61% of the way to the finish line!  But the peaks were darn pretty.  The landscape here in Vermont above 3000 feet is virtually identical in character, climate and ecology to the landscape above 6000 feet down in SW Virginia, western NC, and eastern TN.   It felt like old times revisited.  And the views were wonderful.  The shot shown up top is from Bromley Peak, where the AT descends the south side of the summit on a ski trail.  Looking down the ski-lift the view was equally splendid: 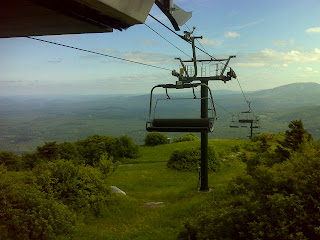 Styles Mountain had a viewpoint at its summit too. 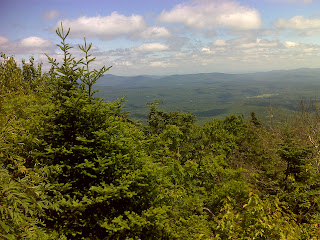 Peru Peak supposedly did too, according to my guidebook - on a short spur trail.  But I never did find it, not going northbound, not on the way back southbound.  And I was really scouring the trail.  I guess you 'can't win 'em all', as they say.  But I won't complain.  Today felt like a *short* but hard day (some steep climbing), when it was actually a *long* hard day.  I think I'm getting my second wind!

Map and link to photos:

AT Day 156 - Bromley Peak at EveryTrail
EveryTrail - Find trail maps for California and beyond
Posted by PJ Wetzel at 5:29 PM