H is for Highpoint

And H is for Hot.  Height or Heat - that was my choice today.  The summit of Mount Greylock is at over 3600 feet.  It's the Highest point in Massachusetts.  And it was about twelve degrees F cooler than the towns of Cheshire, Adams and North Adams down below.  It was already hot down in Cheshire as I walked the streets at 9AM after climbing up to the Cobbles again to see how Mt. Greylock would look from that perspective: 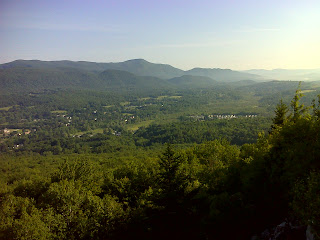 You know ... when you look at that photo, you wonder how a person could hike from where it's taken to the top of that distant looking mountain in one day.  But it's only 9.2 miles away via the AT.

There were some pretty field walks in the Cheshire environs before I began the serious business of climbing up to the Massachusetts Highpoint.


But it was good to leave the heat behind.  There wasn't much wind today, so it was purely the effect of elevation (the 'dry adiabatic lapse rate' to us meteorologists) that caused the cooling effect.  Mt. Greylock had a secret surprise for me - a cute and entirely unexpected little pond within just a hundred yards of the summit.  You had to hike the AT to get there - no other access to this little gem. 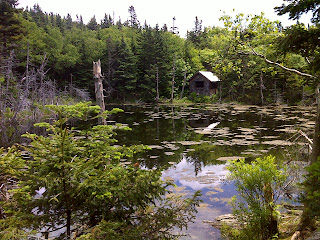 And the summit was the place to be on this Sunday, so the crowds were there ... the parking lots were full to overflowing.  Motorcyclists were out in force.  The hang glider pilots were waiting for some wind - don't think they ever got it.  This view is of their launch point overlooking Adams, MA, taken from the top of the tower.  The inside of the tower was not ventilated, and the crowds were there too - glad to be back out of there and in the fresh air again ... 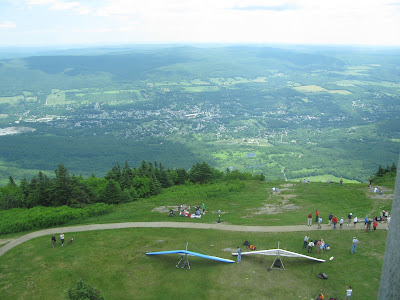 ... but not glad to have to make the descent back to sweltering Cheshire where I was parked at the intersection of the Appalachian Trail with another 'AT' - the Ashuwillticook rail Trail - just rolls off the tongue, doesn't it? 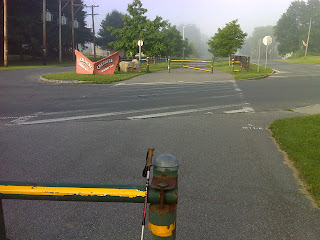 The real High point of today - Mt. Greylock - was my turn-around point.  So I get to go up there again tomorrow from the north side and experience it on a much more sedate Monday.  Weather looks to be much the same.  It will be good to be back up there, High above the Heat.

Here's a link to many more photos, and a map of the route of today's hike:

AT Day 148 - Mt. Greylock at EveryTrail
EveryTrail - Find the best Hiking in Massachusetts
Posted by PJ Wetzel at 6:50 PM