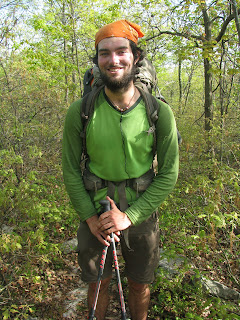 This sad news really hit me hard.  This is Paul Bernhardt, aka 'Parkside', the very first person I had met down south (near Max Patch) as I was working my way southward toward Springer, and then met a second time up north, on my way to Katahdin.  He was just the eleventh thru-hiker to check in at Harpers Ferry: 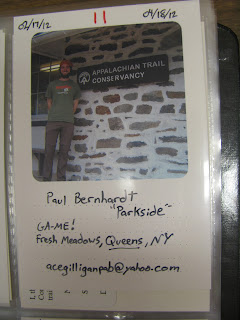 Paul passed away on the trail in Maine on the evening of Friday, June 15th while swimming in Pierce Pond after doing a 20 mile day.

Because Paul was the first such encounter during my hike, I diligently followed his entries in the trail registers, and took photos of most of them.  Here's a sampling - a super-intelligent, inquisitive kid! :

As you see from the last entry, Parkside hooked up with 'Iceman and Viking', whom I met along with 'Achilles' in far NE Pennsylvania on the evening of April 29th and again on the morning of April 30th, just before Delaware Water Gap.  I know for a fact that Achilles was there at Pierce Pond the day Parkside met his end, and dove in to try to save him.  I don't know yet where Iceman and Viking were that day.

And then there's this, in which the punch line at the top of the next page is edited for family rating -- from the Morgan Stewart Shelter:

Finally, and stunning to me in its timing, is the entry I read on the last hike before I heard the news.  A little insight into Paul's motivation, perhaps.  This was a super intelligent, inquisitive kid.  The world will miss him and the productive life he would have embarked on after his thru-hike.

But what brings me closest to tears is the simple fact that Paul will never make it to Katahdin - that his thru-hike was the last thing he knew.  I can only hope that it made him happy.  And judging from our meeting on May 6th, I believe it did. 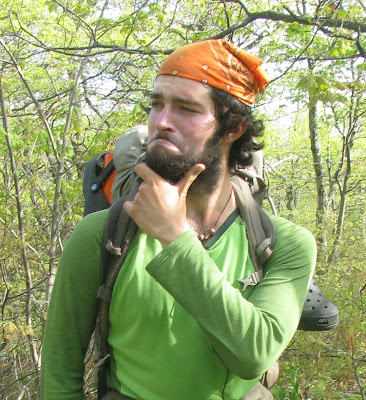 Rest in Peace, my friend.  It truly is the journey, not the destination.  Enjoy your thru-hike to Forever ...

This is the 'Parkside Fellowship'. They all summited Katahdin together on June 29th carrying Paul's ashes. I met so many of these people ... 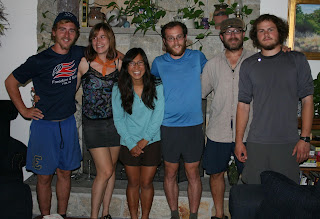 Left to right: Drop Out (met him at a Cable Gap Shelter just south of Fontana Dam on March 13th and again the next day on the trail). Next is Catwoman (who I don’t believe I ever met), Swivel, Spiral (met and photographed this couple on Bear Mountain, NY, coming down the granite steps to Hessian Lake on May 18th), Germanator (face looks familiar but if we passed we just exchanged pleasantries) and Achilles (met April 29 in the evening and the next morning either side of Leroy Smith Shelter near Wind Gap, PA when he was hiking with Iceman and Viking – who also hiked with Parkside for a while in late May)

Tragedy brings people closer. The AT does the same. I feel part of this family ... and family is forever.
Posted by PJ Wetzel at 5:02 PM