N is for Nagging

I found out today, from the caretaker at the summit of Stratton Mountain, who came out of his little hut at 8AM all decked out in tight fitting clothing, long sleeves and pants drawn tight at the cuffs, gloves and a hat with a face net tucked into his collar, that these ubiquitous little flying pests that I call 'gnats' are, in fact, the Notorious ... yea, Nefarious ... Nemesis of the North: the black flies.

To which I responded: "Do they bite?"

He was flabbergasted.  They eat him alive.  They've been  known to kill livestock.  But on me all they do is buzz me.  A few land on my skin and crawl around aimlessly until I smack them.  Most don't land on me at all, or land and take off again.

Yes, they were so thick at high altitudes yesterday and today that they drove me crazy just with the buzzing and swarming, but for some reason they don't bite me - at least not yet.  I'm undeservedly blessed. 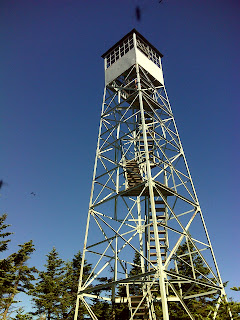 Blessed also with perfect weather for the third day in a row ... Nearly Nirvana is the N phrase!

The views from the Stratton Mountain Fire Tower were spectacular.  Let me give you a quick 360 degree tour.  First (of course, N is for) North to the adjacent summit where the Stratton Ski area Gondola runs on weekends all summer and is free for AT hikers.  Also in the shot is the Bromley Ski Area:


East - a seemingly endless line-up of ridges.  Can't give you names: 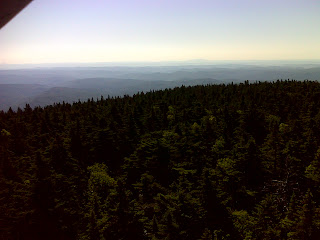 South to Somerset Reservoir and the closer, smaller Grout Pond:


and West to Stratton Pond:


The AT takes you past Stratton Pond: 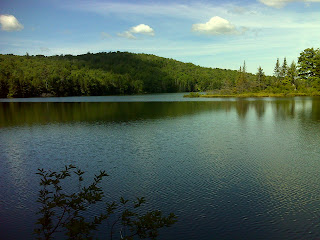 Then you wander along mostly level easy trail for two miles until you come to the Winhall River. 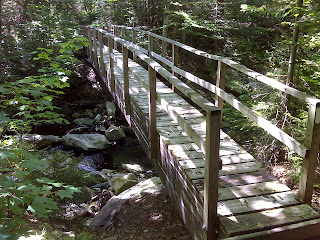 I turned around 1.3 miles past that river and headed back up over Stratton Mountain and 'home'.  All surprisingly easy trail today, so I made great time.

I passed and chatted with thru-hiking couple 'Alien' and 'Swiss Miss' from ... (where else?) Switzerland, here on a six month visa.  And for the second day in a row I chatted with 'Whistler' and 'Two Cents'.  'Two Cents' plans to not only thru-hike the AT but also do the entire Long Trail.  And though I haven't mentioned them so far, I once again met and chatted with section hikers 'Match Box' and 'Twisted Knickers', two wonderful spirited ladies whom I first met coming out of Dalton about a week ago and have passed nearly every day since.  They're out for twelve days, and I have little doubt I'll see them again.

Here's a map of today's hike and a link (the title line) to more photos:

AT Day 154 - Stratton Mountain at EveryTrail
EveryTrail - Find the best hikes in California and beyond
Posted by PJ Wetzel at 5:17 PM