A is for Apathy

... a trait I cultured as a rebellious teen in the early 60's, but which I cannot now abide. It is *SO* much easier to hike the AT if you don't care about what you're passing - if you're just trying to log the miles to the next shelter or town or mail drop. Caring about the trail drains you. You evaluate the maintenance, the erosion issues, the choice of route, and of course the scenery, landscape, topography, geology, weather, vegetation, chipmunk alarm calls, bird song, mosquitoes, mud, slippery bedrock, litter, guidebook errors, trail rockiness ... the list seems endless. I care about all of these things. I cannot ... I WILL NOT ... pass an inch of trail without giving it its due. Others may hike the trail with ear-buds and an iPod, tuning out the wilderness. They may hike with companions and wile away the miles lost in conversation, oblivious to the wonders of nature that surround them. They may march down the trail in brisk gulping strides, treating walking as if it was some sort of exotic fitness ritual. But I cannot. I must walk the the path of the hunter-gatherer - alert - seeking that which the trail might provide. Seeking a fuller understanding of The Provider. This ... THIS ... is the oldest profession (despite the prostitute jokes) -- the hunter and gatherer of natures provisions. This is who I am, at the deepest level. 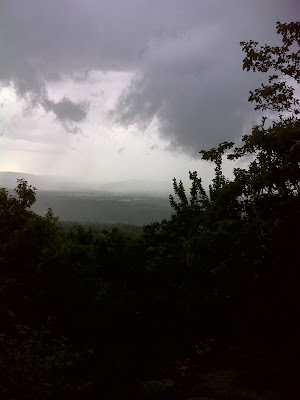 Sunday, June 3, 2012, 2:40PM:  The thunderstorm rolled in. I was on the ridge at the end of East Mountain, four miles from safety. The downburst was whipping the trees. I knew the rain was not far behind, but I needed to get off the slippery bedrock and out of that exposed position before I could stop to pull out my poncho. I found a spot in the wind-shadow on the lee side - a nice flat rock to sit on. I ripped the poncho out of my pack as quickly as I could and got it on. Thirty seconds had passed and little rivulets were already forming on the trail. I hunkered down, nestled inside the poncho, and hoped the storm would blow itself out. The lightning seemed to be mostly cloud-to-cloud. It could have been worse.  Now the wind was subsiding. Fifteen minutes later, the downpour had tapered off to a light steady rain.  And so I began the four mile trek back to my cave, my wickiup, my yurt - my home-place out of the elements. I felt alive, more so than I do most of the time. Ten thousand generations of Ancestors were sharing their wisdom with me. "This is how we have lived since the dream time. It is not easy. It is not comfortable. It is real." 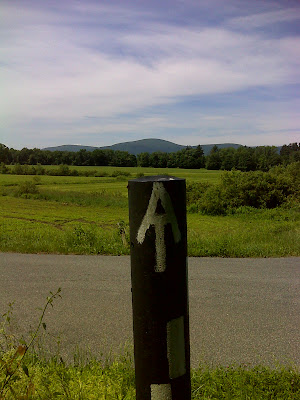 When you come back from such an experience, and return to the world of lip gloss and diesel and neon, you might find it all a bit tedious.  You might want to shake things up a bit.   Look at this mountain.  They named it Mt. Everett, and they're not going to change the name because it honors somebody who's dead (an old Mass. governor, no less).  And once you name something it gets written down in a data base somewhere and the government declares it official.  But I've climbed it, and now I've studied its profile.  This is Mount Eggplant.   I mean look at it, people.  Open your eyes.  It's an eggplant!

Here's the track of today's hike with the two parking areas at either end connected by an annoying straight line - can't do anything about it.  The title is a link that takes you to a bunch more photos.

AT Day 141 - East Mountain at EveryTrail
EveryTrail - Find the best Hiking in Massachusetts
Posted by PJ Wetzel at 7:59 PM