M is for Mission Statement

It's time I put a mission statement down in print, all nice and official-like, the way businesses do.  What is my intended purpose for hiking the Appalachian Trail?

First, to become the first person to hike the Appalachian Trail both ways end-to-end in one calendar year without spending a single night on the trail - 'home' every night before midnight (home being my two-ton motorized steel tent, or some other accommodation such as a motel or friend's house) and back to the trail the following morning for a new 'out-n-back' or 'yo-yo' day hike.

Second, to visit and photograph every official AT shelter and to make the side trip to most scenic attractions such as waterfalls and views located within a half mile of the AT on blue-blazed trails.  To take extensive photographs of these attractions as well as of side trail junctions, road crossings (and associated parking areas) and some notable camp sites, oddities, monuments, trees, wildlife, flowers, footbridges, streams, ponds, and lakes, etc., etc.  In other words, to 'smell the roses', not just to log the miles.

Third. and last, to report what I experience, particularly the nature of the trail, by publishing a daily blog entry with the best of the photographs included, and with a complete GPS track to 'prove' that I did what I say I did.

Today was the 153rd day that I successfully completed that mission.   It was another long day hiking the north half of the wilderness section between VT 9 near Bennington and Stratton-Arlington Road (Kelley Stand Road).

There wasn’t nearly as much elevation change to deal with today, but the trail itself was a bit more difficult – more rocky in places and with more small scale ups and downs. Still I found that I had gone well beyond the half-way point yesterday, so I reached my turn-around point in good time.

I passed more than 20 hikers on the way out and talked with several of them, including thru-hikers ‘Whistler’ and ‘Two Cents’, with whom I had the most in-depth conversation. Almost everybody I passed on this southbound leg I had passed on my evening southbound leg yesterday. 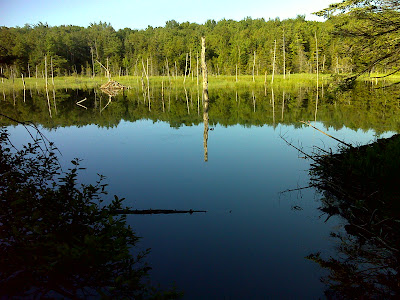 The total official trail distance I covered today was just over ten miles, the first of which was level to the crossing of Black Brook, then a gradual climb for the next mile, passing a nice beaver pond (photo at left), to the road crossing of FS 71, then a mile of more steep climbing followed immediately by about a mile of descending on which the Story Spring Shelter was located. Then for half a mile I passed several more beaver ponds before beginning a gradual ascent that reached an unnamed summit with a viewpoint with a name: Lydia’s Rest. Then there was a steep descent to a valley with some uncomfortable and slow, rocky ups and downs in it. There I passed Kid Gore Shelter and then began a fairly steep climb back up to a summit called ‘Big Rock’ which had a fairly modest boulder, about ten feet high, sitting on otherwise rock-free ground. From there it was only about ¾ mile to my turn-around point.

The weather was, for the second day in a row, completely perfect for hiking and for viewing long-distance vistas.  It quite literally could not have been better.  That was such a gift.  It made the long day of hiking on long stretches of trail without landmarks a wonderful experience.  If only every day could be this way!

Here's a map and link to more photos:

AT Day 153 - Southern Vermont at EveryTrail
EveryTrail - Find hiking trails in California and beyond
Posted by PJ Wetzel at 5:08 PM